Andale Ariba! F1 moves 1,000 miles south for the next race, down to Mexico City and the emasculated Autódromo Hermanos Rodríguez.

At an altitude of 2,200 metres it was a real challenge for the motors in the days of naturally aspirated engines. In this era of turbocharged, hybrid driven machines the impact on engine performance in less pronounced. However, the thin air does have the potential to impact the drivers with less oxygen compared to less elevated circuits, but it does mean the cars fly along the main straight with the cars getting up to nearly 217 mph (349 kph for the non-Brits). There is also a nearly 900 metre run from the grid to the first corner so plenty of opportunity for silliness at the start.

Both Lewis and Max have the chance to match the record of three wins in Mexico currently held by Jim Clark, although Clark's win in '62 was a non-Championship event. After the race in Austin there was an interesting interview (I use the word interesting in it's widest possible sense) with Toto Wolff who commented that Mexico was "not a circuit which suits there car". Having won three of the five races there since F1 returned in 2015 one wonders how they would have performed if the car actually went well there!

Max will be on a high after the race in the US. Mercedes lost out when Red Bull opted to pit Verstappen for new tyres earlier than Hamilton and the pace Max was able to carry took him to the win. What a shame we are back to the days of tyre stops being the deciding factor in who wins a race rather than actually seeing racing cars racing one another for position on the track. We did have a little entertainment in Austin, as Lewis attempted to catch Max but, inevitably, as soon as he was within a couple of seconds of his rivals car the handling went to pieces and he couldn't get close enough to attempt to overtake.

We are promised the rule changes next year will reduce the impact of turbulent air when cars follow one another. Let's see shall we, there have been many false dawns in the promise of close, competitive racing at the "pinnacle" of motor sport and I've watched it for long enough now to be very sceptical.

There was, of course, some racing further down the field which, shockingly, the TV director actually managed to show us and behind the title protagonist will be their rather lack lustre team mates. Anyone who says F1 is just about the car should look at the relative performance of Perez and Bottas in the same car to see just how much the driver contributes.

McLaren and Ferrari will be scrapping for the minor places behind the two top teams, and then there will be the cluttered mid-field. Apparently Haas will also be taking part, although Nikita Mazepin in particular appears to be out on track mainly to get in the way of every other driver as often as possible. Worst F1 driver since Yuji Ide.

i wonder about this race & that can Lewis no afford to take that engine penalty now. because he needs to be at front. he cant afford to be stuck in the midfield if he does qualify 3rd like he has in the last 3

i wonder about this race & that can Lewis no afford to take that engine penalty now. because he needs to be at front. he cant afford to be stuck in the midfield if he does qualify 3rd like he has in the last 3
Click to expand

I attended a performance driving event with Jaguar once and Roberto Merhi was in the car with me as my coach.

This means that Red Bull's engine partner Honda is more able to compensate for the lack of oxygen in the atmosphere at Mexico City than are Mercedes, so they should have a power advantage. It's hard to see on paper how Mercedes can combat that."

P1 said:
I attended a performance driving event with Jaguar once and Roberto Merhi was in the car with me as my coach.
Click to expand

that very interesting, i hope was he better in the jaguar than in F1 & F2

And did FB mention some sort of motor race ?

I just hope it’s a good one.

Valued Member
We know full well that we will have the usual crap of Red Bull painting their drivers up to look like skeletons, one or two teams will wander out in sombrero's and Sky will show lots of video of Nigel Mansell overtaking round a corner that doesn't exit any more.

Such is the World of F1 in the 21st Century, anything to distract from the meagre fare that is the race itself.


What if Verstappen elbows Perez off the track as the first corner is tight?

here 's hoping for some excitement

Contributor
Perez should go for the win. That's the only way we will see a race here.

Of course I am not watching anyway since the championship is over.

i dont think he can, as max verstappen should win but lets say Perez is in the lead after the final round of pitstops & lewis is nowhere like 2017 or 2018 he going find it very tough to let max past with 138,000 fans cheering him on

It makes it intriguing where Perez qualifies...remember how they messed up in Hungary in waiting last minute to get a gap to start the last run but could not get the tow from Mercedes?

Then if Perez is top3 say will he go for it at the first corner and how Verstappen will react...I remember Mansell was suppose to help Prost at Estoril and ended up nearly forcing Prost into the pitwall

Premium Contributor
More likely is that one of the Mercs does a desperate lunge at the start and causes an almighty pile up.

Bill Boddy said:
More likely is that one of the Mercs does a desperate lunge at the start and causes an almighty pile up.
Click to expand

Lewis needs to pull out 1 of his top 10 races or have some "luck" like that. in the next 2

If this was the Hamilton fighting Rosberg in 2016 he might have a shot. Unfortunately I haven't seen him being that aggressive recently. 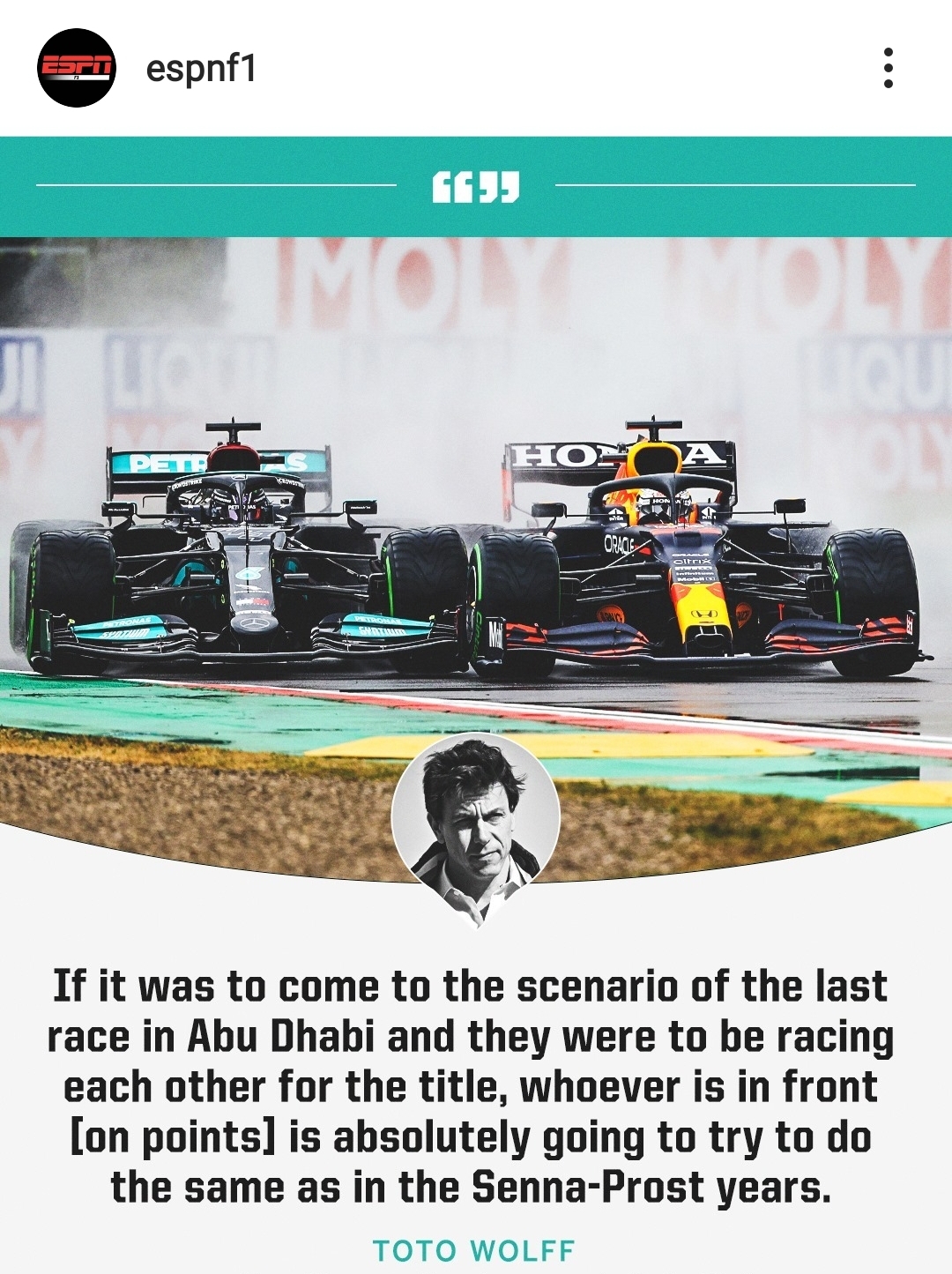 Too late it already has with Verstappen at Monza

Il_leone said:
Too late it already has with Verstappen at Monza
Click to expand

Silverstone, Hamilton was taking the same passing attempt any other formula driver would. We saw many similar passes with no issues. Verstappen closed the door. If it was Perez and not Verstappen in the car at Silverstone, the cars would not have collided.

Bill Boddy said:
More likely is that one of the Mercs does a desperate lunge at the start and causes an almighty pile up.
Click to expand

I rest my case.