The Summer break is nearly over. Hurrah! The first race back is at one of the classic motor racing circuits. Hurrah! Probably for the first time ever I hope that it doesn't rain as this was what things looked like in June.


Not so much Eau Rouge as Eau Merde.

The last couple of races have set things up quite nicely for the titles races. Red Bull appear to have "awakened the Kraken" at Brackley with a, in my opinion, very poorly managed PR strategy following the incident between Max and Lewis at Silverstone. It looked like Merc had sort of written this season off after the early races as they got things ready for 2022. The anti-Hamilton onslaught seems to have given the (not) Silver Arrows a bit of an incentive to make some upgrades to the car, which has brought it back closer to the Red Bull, maybe even ahead.

I suspect that the completely over the top reaction from all concerned will have consequences with how these things are handled in future. F1 teams have tried to run the sport for too long now and those in charge need to help them understand that they are participants, not the stewards or rule makers. Yes, of course, they have a vested interest in the sport, but their vested interest is about helping them win rather than what is best for the sport more generally.

One simple solution would be to not allow the teams any contact/discussion with either the Race Director or Stewards whilst the race is in progress. The Race Director, from what I have read, is responsible for making the timetable work and deciding if the race should be slowed or stopped via the VSC, safety car or with red flags. The Stewards are there simply to consider, investigate and make decisions on incidents involving cars on track. Their decisions should be, and be seen to be, completely impartial and there should be no involvement or influence from anyone in any F1 team.

F1 teams should not be able to ask the Stewards to investigate an incident. They should not be allowed to contact the Stewards during the race, for any reason. If the Stewards issue a penalty, or decide not to, the teams should have no right to appeal whilst the race is in progress. Should a team not implement a penalty within the time decreed within the rules there should be additional sanction, preferably (from my perspective at least) with the car being black flagged.

After the race there should probably be a formal meeting between a nominated representative of each team where the Stewards go through the decision, with the hope that by explaining why the did what they did this would go back to the team and the drivers and maybe they wouldn't do it again. Of course there needs to be a right of appeal, but by not allowing it to take place during the race I would hope most teams would accept whatever punishment is meted out without complaint. I would also suggest that should a team appeal a decision as "too lenient" there should be some consequence for them if the appeal is not upheld. Perhaps a fine, maybe points deducted from the Constructors Championship.

I would also suggest that the press corp needs to take a step back. The push for an "instant response" from the team principal or some team hanger on exacerbates the situation. I would also like to see an end to the chat with the pit wall between the commentary team and a chosen race team. This is for a number of reasons: as already mentioned, the need for an instant response, but also because the discussions which I have witnessed are trite, pointless, and offer non insight in to the race, the teams plans or strategy.

If you would like to join me in this fantasy world where the teams teams listen to, and abide by the Stewards decisions, with no outward complaint or histrionics do switch on the next WEC or Formula E race and see how they manage it.

The race is on between 27th and 29th August and lasts for 44 laps. There will be lots of orange around the circuit, although this is more a home race for Max Verstappen than race in the Netherlands the weekend after as this Dutchman was born in Hasselt, Belgium (If I were born in a stable would it make me a horse?). Expect Lewis Hamilton to be booed every time he takes his helmet off. Hopefully it will not go beyond him being the pantomime villain.

watching the feeder series it was a great wet drive from lorenzo columbo. thrashed everyone. but i wonder what hes like at the stewards.

"your free to go"
"just 1 more thing, the fact he was doing 5mph quicker through the double yellows than everyone else 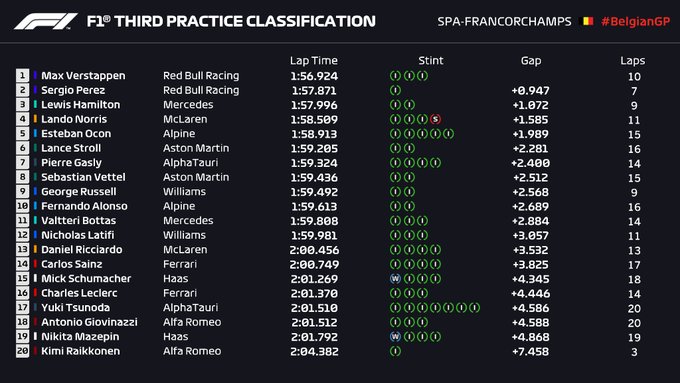 the British young guns had a great P1 Norris & Russell absolutely outstanding again in that session. Norris reminded me of when he nearly took put on pole in imola

Contributor
Heartbreak for Lando Norris, it was looking so good for him.

i understand why it he is more hesitant because masi doesnt want be where we where 5 years ago. where they were scared to use the wet tyres. ive lost count of the races that the safety car stayed out so long they were pitting for inters immediately.

but you could tell that it was too wet. it was far too wet. even if it when from slicks to undriveable in an instant. i couldn't believe their is 5 mins between stroll at q2 in bright sunshine & Norris crash. which im just delighted he is ok

Wow… it had been looking like it would be a Brit ( other than Hamilton) on the front row…. Shock that it’s Russell though! What a drive!

The Artist..... said:
Wow… it had been looking like it would be a Brit ( other than Hamilton) on the front row…. Shock that it’s Russell though! What a drive!
Click to expand

Yes very impressive. I am sure he will let Hamilton past if he cannot block Verstappen on the first corner.

George Russell take a bow. that was incredible. absolutely shocked. when you think he can impress any more he goes & do that. just wow. toto wolff would be dragged away by the people in white coats. if he gave bottas a contract extension

also bottas being in 8th. means he ended with the effective 10 place grid penalty he shouldve had not 5 in hungary
Last edited: 28 August 2021

Contributor
George Russell with the lap of the season. 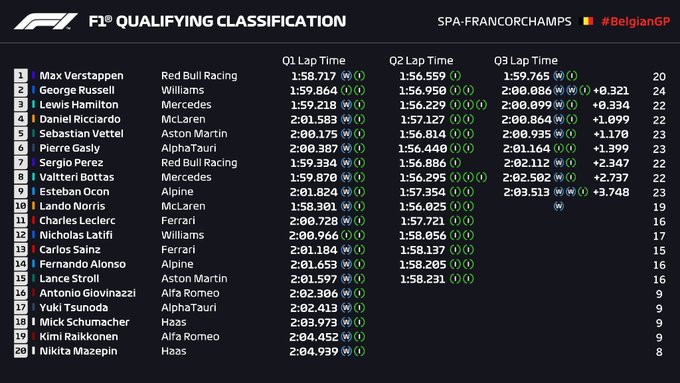 i hadnt see the classification i was so focused upon russell & i hadnt realised how well riccardio & Vettel had done today in for 4th & 5th. also i hadnt realised Perez was so low being 7th, i could see him taking the engine penalty as wet race & spa is as damage limitation as you could expect & being 7th or 16th (assuming norris is in the pit lane) seems as safe as each other. 16th probally seems safer in same way how latifi was in 2nd in hungary
Last edited: 28 August 2021

Premium Contributor
I can't help thinking that Botas has cemented his place at Mercedes this afternoon.

Bill Boddy said:
I can't help thinking that Botas has cemented his place at Mercedes this afternoon.
Click to expand

Perhaps were it not for the fact the contract with whoever got the drive is already signed over the break!

Bill Boddy said:
I can't help thinking that Botas has cemented his place at Mercedes this afternoon.
Click to expand

i disagree, because after the 2 interviews post qualifying. Jost Capito (youtube below) & then Wolff which annoyingly hasnt been uploaded anywhere. i think it has been sorted its hard to describe unless youve seen the interview live but there was just a glint in toto eye. when they asked toto & how he was praising russell & saying how he knows what he wants to do

Contributor
It’ll be a longer wait for Perez. F1Brits_90