Onwards to Sochi in one of those frustrating season where we do have three teams in the mix for wins but somehow we have absolutely no title fight kicking off whatsoever. Hamilton has not even had to do his usual post summer blitz to get his massive title lead but has merely gone into Alain Prost mode where he just picks up podiums and consistant results whilst the others go up and down. His nearest rival is his own team mate and he is being anchored down by his own team from challenging Lewis because they are scared of their drivers getting in each others way and giving wins away to Red Bull and Ferrari. So Lewis is laughing and two and half race wins in front in the championship.

So no title fight but we are getting good racing for once. If Ferrari had not messed up so badly with set up and strategy at the begining of the season then it's clear they would have been in contention with Merc, certainly with LeClerc anyways. After Charlie boy was politically swindled out of his third win in a row last time out I'm fully expecting him to drive angry in Russia, which was something he did often in his GP3 and F3 days. It is impressively fast but often ends with a smash. His illustrious team mate has been a shadow of his former self all year but suddenly turned up when he hasn't all year at Singapore. If we ignore the strategy swindle you have to say Vettel had an impressive weekend and drove beautifully. The worrying thing for him was though that even on form he only beat his young team mate via strategy rather than pace. It's possible the win might inspire a revival though. I genuinely hope so as would love to see an on form Vettel mixing it with Hamilton, LeClerc and Verstappen.

Speaking of Max I'm giving his own paragraph to officially doth my cap to him. All year he has been consistently fast, he's had race craft, he's had guile and he has basically looked like the complete racing driver. This is something i've never seen before and often wondered if I would see. Don't get me wrong I always knew he was a fantastic driver on his day but now I see he can do it over a season. Respects to you sir.

Away from the main contenders I'm paying close attention to some of the midfield drivers at the moment as there is a change in the wind. The much maligned Antonio Giovanazzi has found a lot of pace since the summer break. Whilst he has a tendency to get into an accident and not get the results from it the old adage is that it's better to have a fast driver that crashes than a slow driver who plays it safe. Maybe it's time we reassessed him. Similarly we might need to have a look at Piere Gasly too. Before the season started the media decided the story was that Gasly was under pressure and might be dropped. Low and behold it happened! However he is now at Torro Rosso and has had some quality drives (Singapore was probably his best drive in F1) whilst his replacement at Red Bull Albon has not really got much better result than Piere did. Maybe Gasly is going to show he is a capable driver just that most people going head to head with Max Verstappen are going to look ordinary.

So that's the runners and riders but what of Sochi? Well unfortunately it's a pretty dull track with one really good corner. I think last year it may have had no overtakes at all. However it's very harsh to blame the circuit because some of the best GP2 and GP3 races I have ever seen have been held he where the cars were three wide going through turn 3 on nearly every lap. So will the racing improve with the front teams now closer? Maybe. Unfortunately we won't have the Singapore effect where the middle teams are brought close enough to the action to influence it but we may get a few fiesty moves.

Who is going to win? Well I'll let you guys debate that but how about this? Have the rubles been put down by the great Bear hunter? Will we suddenly see the track clear and a certain Dani Kvyat come to the front to complete one of greatest F1 comebacks of all time? I'd love to see that race so let's hope so!
Last edited: 26 September 2019
Click to expand

Contributor
This is usually a dull track, I actually don't mind highlights of this one as a rule.

Contributor
Honda F1 tweeted the following below: So grid penalties for all four of their drivers.

'Looking at our PU usage for the rest of the season, in Sochi all 4 drivers will get a new Spec 4 ICE. With a different replacement history, Kvyat is changing all elements except the battery. He will start from the back of the grid. The other 3 will get 5 place grid penalties. '

Contributor
Hopefully all the Honda engines go in this race so they have to have grid penalties for Japan.

Contributor
Yes it seems glaringly obvious that Honda are doing this here so they have brand new fresh engines with no penalties at their home race to ensure good PR and results.

I guess when a driver from your former partners slagged off your entire engine and company over the radio at the home race in front of all your senior directors and investors you take precautions.

Contributor
Maybe there should be a rule that for every race you use more than your allotted components, the driver will get a grid penalty for those races.

Contributor
That would screw over drivers entire seasons though. Personally I'm in favour of deductions from constructors points tally. Say 10 points every extra components over the alloted amount and 5 points for every illegal change (except in cases of compete destruction through crash).

Bet you it stops then.

Angel said:
This is usually a dull track, I actually don't mind highlights of this one as a rule.
Click to expand

Exactly. I'm going for a bar lunch instead. Much more fun. 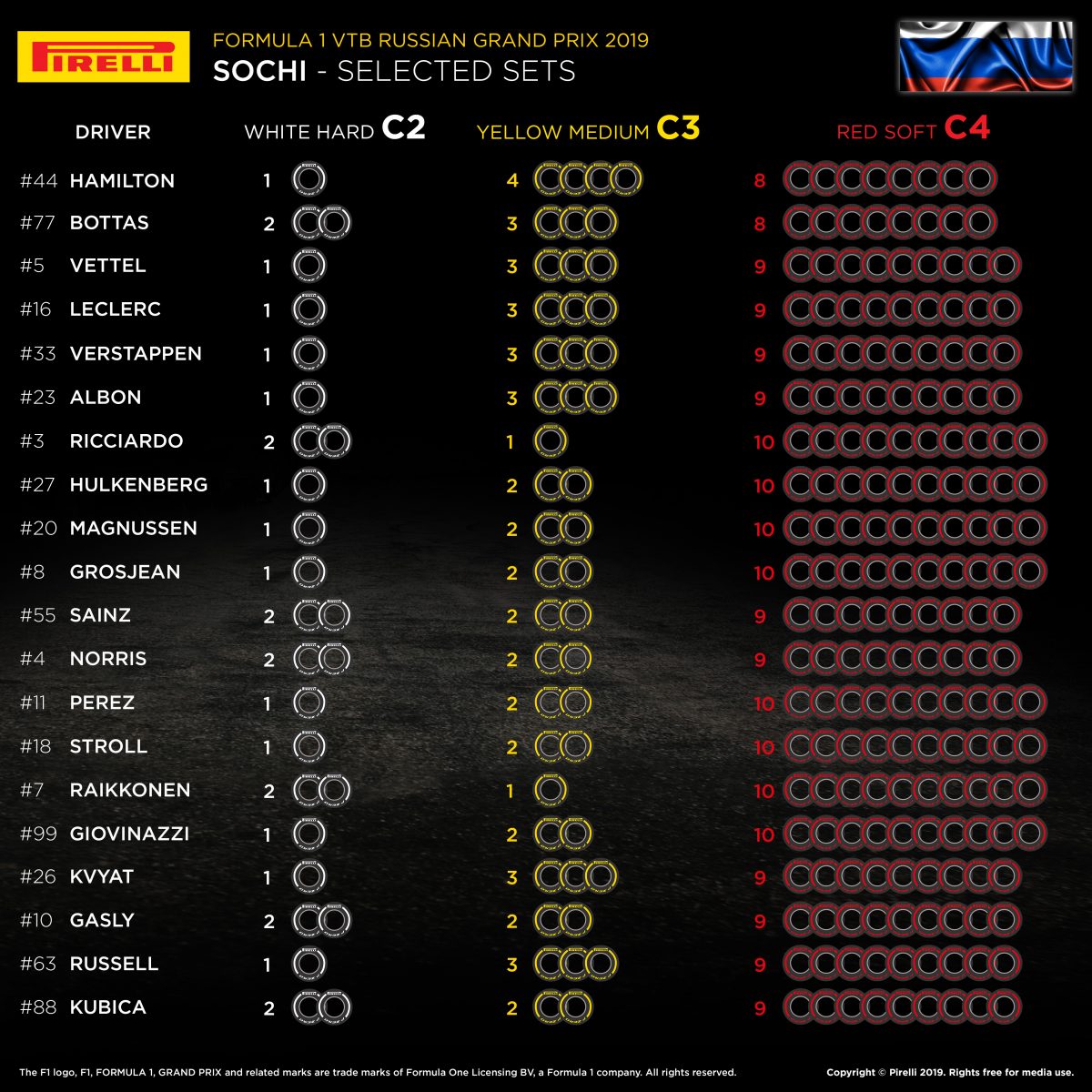 Contributor
United Kingdom resumably the top ten qualifiers will start the race on softs whilst none of the rest will not start on them. There could be some brave souls who start on hards but very few, if any. This farce of haing to take three types should go, together with having to take a pit stop.

Contributor
Nice link to UK polls there Bill Boddy - nothing to do with Russian GP but interesting all the same.

Valued Member
I wonder if Mercedes might let Valterri win this one as compensation for screwing his race in Singapore? It would be as hollow as Gerhard Berger's win in Japan '91 if it happened.

Contributor
This is one of the tracks Bottas is actually usually quicker than Lewis on.

FB said:
I wonder if Mercedes might let Valterri win this one as compensation for screwing his race in Singapore? It would be as hollow as Gerhard Berger's win in Japan '91 if it happened.
Click to expand

a team favouring 1 of their drivers over the other so they can win & it feeling hollow. i cant see it, too far fetched

but as RasputinLives says this is maybe bottas strongest track & in recent years 1 of Lewis weakest.
Last edited: 26 September 2019

Valued Member
On a seperate note about hollow wins, did you hear Crofty waxing lyrical about how a Le Clerc win in Singapore would put him in a exclusive club of drivers who break their duck and then win three in a row? Included in this list was Mika Hakkinen who won his first race in Jerez in 1997 and then the first two races in 1998, which is what the record books clearly show.

What the record books don't mention is that Mika's first win in Jerez was a stitch up after Schumie punted Villeneuve off with Ron Dennis going up and down the pit lane asking the other team managers not to challenege Hakkinen in the final laps. Then David Coulthard gave Mika the win in Australia 1998 because of a "gentlemen's agreement" about leading in to the first corner. An action not reciprocated by the Fin at any other race that year.

Contributor
Yes and 76.5% of people know that.

Contributor
Plus - to add to the original point - Damon Hill's wins were also pretty meaningless as they were all granted to him by his team after he had been a good little nurse maid and shepherded Prost to win after win until the title was secure for him.

Contributor
It also helped Damon Hill that Prost stalled on the grid in Hungary and Prost also had engine failure at Monza.