The French Grand Prix was, is and will continue to be part of the history of F1 and the fact that the powers that run Formula One chose to drop it from the calendar from 2008 was a disgrace and insult to the heritage of the sport. Regardless of the finances, there are certain races which must be on the F1 Calendar and France is one of those. Liberty media would do well to look at the history of the sport and learn what the sport needs not just from a financial perspective but also from an historical one.

Anyway, enough of my ranting France is back. Hooray! The race is taking place at Paul Ricard. Hooray, sort of. Why sort of? Well, Paul Ricard has a history in F1 with the race taking place there at various times in the 70's and 80's, sharing duties with the circuit at Dijon Prenois. But the circuit which was used back then has been heavily revised for safety reasons since the 80's. The old back straight was over a mile long and watching the turbo cars of the 80's blast down this was something to behold. After the death of Elio de Angelis a chicane was put in to the straight and then the circuit was shortened. The bizarre thing is de Angelis' death had little to do with the length of the straight and more to do with the poor emergency support at the practice session.

By the way, we shall have to refer to the circuit as Le Castellet otherwise we are giving free advertising to an alcoholic drink maker who only paid for the track to be built. Not like he deserves any credit is it? Perhaps we should now call it the Circuit Bernie Ecclestone, after the current owner. In fairness to Bernie he has invested a lot of money to improve the facilities to the point where it can host a Grand Prix but then he has a lot of money doesn't he.

So along with the emasculated track comes another strange innovation. There are no gravel traps at Le Castellet, instead there are blue and red stripes painted around the edge of the track which are designed to slow the cars down should they enjoy an excursion off road. These painted run off areas are a mix of asphalt and tungsten and the red sections are deeper than the blue so give more grip to the tyres, slowing the cars down. Having watched a WTCC race it is sometimes difficult to work out where the track runs and, reading some stuff to write this article, found out that the circuit has 167 possible configurations. I wonder if any of the drivers will get lost?

Having just got over the "excitement" of Canada I can't be bothered to get too much into where we are in the 2018 championship. Suffice to say that pole will be either from Ferrari, Mercedes and Red Bull and the winner will also be from one of these teams. The test will be whether Merc bring their upgraded engine to France and if this will get them closer to Ferrari.

Enjoy one of the historically most important races Formula One could have. I hope it will provide some close action but I have a horrible feeling it will struggle to beat the number of overtakes in Canada. It should be better than Monaco though.
Last edited: 10 June 2018
Click to expand 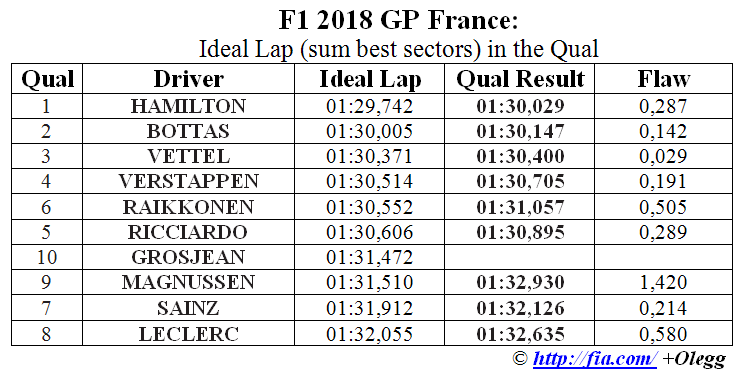 Ruslan said:
Well, I don't understand all the ins and out of modern aerodynamics....but that seems like something you could easily correct.
Click to expand

But don't you reckon it's a track where aero isn't critical?
Post #75

Contributor
Alonso out in Q1, oh dear what a shame, why don’t you leave the sport?
Kimi blows Q3 again. Seeya, it’s been... long.
Le Clerc into Q3, excellent, get in that red car.
Max beat Danny, tick.
Dominant Mercedes, congrats I guess. Is this the start of a dominant period? Looks ominous.
Don’t like this track, looks horrible on TV and you hardly ever see the fans, they look miles away from the track.

This track gives me a migraine. They must have sat down and thought for a joke "what's the most repellent decoration we can use for the run-off areas?". It probably inspired this -

Valued Member
They're using the thinner gauge Pirellis this weekend, as at Catalunya, so the Mercs are likely to be benefiting from that in addition to their new powerplants.

rufus_mcdufus said:
This track gives me a migraine. They must have sat down and thought for a joke "what's the most repellent decoration we can use for the run-off areas?". It probably inspired this -
Click to expand

Also just went on my accuweather. For the circuit it has yellow warnings for thunderstorms til monday morning. Although i dont really trust it, because its hardly brilliant at times, because last week it said thunderstorms but i looked out of the window & it was blue skies

Contributor
Jennie Gow tweeted that there is a threat of thunderstorms. That will spice things up I bet. Though we all know storms are hit and miss, they could get a deluge of rain, or they might get nothing. I vote for a well timed deluge

rufus_mcdufus said:
This track gives me a migraine. They must have sat down and thought for a joke "what's the most repellent decoration we can use for the run-off areas?".
Click to expand

The track isn't good for me either, then again nor is Austen.

Valued Member
It's not designed to host Grands Prix. It's current iteration is that of a high-performance test track: it is holding a Grand Prix because Liberty needed a French Grand Prix because they're not diminutive and obnoxious. Paul Ricard was the best option.

Titch,
Yes, but you can change the dish to a 90cm one, still use the Sky LNB in the new arm and add the Astra1 arm, depends where you live and your view to the satellites the dish doesn't always have to be on the roof. Trees and other building though sometimes necessitates a higher mounting.

gethinceri said:
But don't you reckon it's a track where aero isn't critical?
Post #75
Click to expand

That is what I am guessing....so therefore I would assume that the teams would be closer together....not further apart.

Contributor
Well it was mainly about aero today, I think.

Valued Member
Aerodynamic efficiency has two main elements on an F1 car, downforce and drag. The most efficient cars produce more downforce for less drag. The two least efficient cars on the grid, hence those with most drag, are the Williams and McLaren hence why they were slowest.

Oh, and what a crap race.

A good measure is if you compare the factory teams and the customer teams taking out the engines and tyres, the only difference comes down to the performance of the chassis

Ferrari still clear of its customers Haas and Sauber

Mercedes - the factory team is out the front , one of its customers is at the back with the same engine and the gap is 3 seconds

Well, an interesting race...but not a particularly exciting one. A few observations:

1. Hamilton walked off comfortably to another win. He seems to have perfected this. Maintains a 2-3 second gap for the first 20 or so laps, making us wonder is something is wrong, and then as the car lightens, drives off to a safe distance.
2. How many people did Vettel hit? Three? Certainly it was lively watching him run back up the pack.
3. Raikonnen suddenly came alive late in the race and took third. Maybe he should race that way all the time.
4. Bottas is cursed. I still don't think he should really have the second seat at Mercedes, but he is certainly having enough back luck this year.
5. Grosjean is cursed....although it was mostly his own doing this time. Still does not have any points this season.
6. Verstappen, Ricciardo, Magnussen, Sainz, Hulkenberg all drove good races.
7. Ricciardo better sign a contract soon, as it appears that Verstappen is coming back on form, and it is not going to make Ricciardo look as good.
8. Leclerc is really something else.
9. There was lots of passing in lots of different places on the track, not just the DRS zones. Nice to see.
10. Will Mercedes have the edge in the next two races? If so, I fear the championship will slip out of reach of Vettel.
11. Where were the marbles? Were the tires so hard that we did not get a lot of them, making passing later in the race possible? If so....maybe the answer for now on is really hard tires.

Finally, it was nice to have Paul Ricard back. I missed it. Not my favorite track, but it feels like it belongs.
Last edited: 25 June 2018

Contributor
Nice summary Ruslan
I would love to see some data on your point 9 though. The overtaking stats will be interesting as I can’t remember any more than 5 that weren’t DRS assists outside of lap one.

There seemed to be two types of overtakes - DRS passes, where DRS seemed to be really (a bit too) effective. The second was wide corner passes, where it looks like the driver in front decided for some reason to try and cover by taking the outside line, leaving a nice open door for the overtaker on the inside. Quite a few times it looked like the driver in front was just leaving a really obvious open door.

Ruslan said:
Bottas is cursed. I still don't think he should really have the second seat at Mercedes, but he is certainly having enough back luck this year.
Click to expand

He's been equal to Hamilton so far this season, if not slightly better. What more do people want to see from him, some trash talking like Hamilton did whilst Rosberg was his teammate. He's quite a bore outside of the car, but at least he's no stick in the mud like Raikkonen.

Contributor
Not the most exciting race. As a Vettel fan I was disappointed with his mistake, but he did as well as he could to minimise it by getting back up to 5th. Another awesome drive by Leclerc, I was pleased he got a point from it. Raikkonen suddenly found some form and did well to get a podium out of it too.
Bottas, I did feel marginally sorry for him, as I did for Gasly and Ocon, these incidents happen in racing though. My cousin races an Austen A35 in the HRDC series and he's had crashes that weren't his fault either, sometimes these things just happen.

Austria next, a track where Hamilton doesn't usually go that well as I recall. Will it be enough for Vettel to claw back some points against him? Geez, I hope so!!!!!