For the 32nd time in a row the F1 circus rolls into Mogyorod just outside Budapest for another race at the Hungaroring. 11 out of the last 13 F1 world champions have won a race in Hungary making it a badge of honour. The two that never won at Hungary by the way are Nico Rosberg and Alain Prost. The circuit now has to be regarded as an F1 Classic and unlike Silverstone and Monza there never seems to be any talk of it dropping off the calendar. This suggests to me they have a pretty dam good contract. I don’t even know who backs it but I don’t see it making more money that Silverstone so I can only conclude they are paying cheap rates.

In recent times the race has thrown up unpredictable results and actually was voted CTA race of the year 3 times in a row from 2013 to 2015. The track itself was resurface in 2016 and is no longer the dust bowl it used to be. The new tarmac made it much faster last year and with the new cars I imagine it’ll be off the charts this season. The twisting turning nature of the track means that a lack of engine power is no longer the disadvantage it usually is. This should catapult Red Bull into the mix for the win and Mclaren into the upper midfield battle. This can only be good for us watching. Verstappen has a point to prove and will be praying his car holds out on him whilst Ricciardo is in the form of his life at the moment as seen by his charge back through the field at Silverstone. The Mclaren drivers are also on form, Alonso always comes to life when he knows the cameras are on him and Vandorne had his best performance of the season last time out.

The main focus will of course be on the title challenge with just 1 point now between Hamilton and Vettel. If you look at the past performances here you’d say Hamilton’s was a mixed bagged compared to his results elsewhere but it eclipses Vettel’s easily who has not done well here in the past. The other title contender is of course Bottas who has shown a ton of speed of late and really has nothing to lose. Any ideas Hamilton has about using Bottas as a number 2 will have to wait until later in the season. Which of course brings us to Kimi Raikonnen who will once again be playing Vettel’s wingman. I don’t expect Kimi to go well here and imagine a lot of complaints about grip coming over the radio.

Hungary is always the last race before the Summer Holidays (Or if you’re Lewis Hamilton you call it ‘Yet more Holidays’) so has an end of term feeling about it. Apparently the drivers are allowed to bring toys and board games in, whilst Charlie Whiting wheels a big TV into the safety briefing so they can all watch Flight of the Navigator as a treat. Consequently there is always a bit of rough and tumble in the field. I expect Ocon and Perez to be on exactly the same piece of track again and both of them to get very passive aggressive about it. The Sauber pairing might go from hitting each other on the track(3 races in a row) to hitting each other off it (My moneys on Ericsson in a fight), whilst gethinceri's favourite driver Kvyat will probably torpedo most of the field off the first corner. Williams will probably disappear into insignificance, Grosjean will moan about the brakes and Carlos Sainz will sigh heavily. The drivers will be united though when they present Jolyon Palmer with a leaving cake that says on it “Thanks for coming” in frosted icing.

I always enjoy this race and I just have a sneaky feeling about a Danny Ric win. Having said that we all know how wrong my predictions can be.
Last edited: 17 July 2017
Click to expand

Valued Member
That experience of beating Vettel in Formula 3 EuroSeries will come good, you know.

(Edited in case there are kiddies reading...)

cider_and_toast said:
I've always like this track. Somehow it always produced a decent race and yet it had a reputation for being boring. I never figured it out.
Click to expand

I love this track too cider_and_toast. It's one of the few tracks that constantly throws something back at the driver for an entire lap. Regardless of how good they are they get no rest. My moneys on Hamilton for this one, he's finding a level that will require any other driver to be absolutely on top of their game and then some to beat him.

I like this track, because it has got proper corners to which Hermann Tilke's do not compare; here's my Tilke inspired recreation of the Hungaroring plus clever pit lane exit:

Valued Member
Rutherford - I don't see a ham-fisted recreation of a better corner from another circuit, nor do I see an overblown gimmick (Valencia swing bridge, Baku castle, Singapore running under grandstand etc.) defacing the circuit for marketing reasons.

A dodgy pit-lane exit does not a Tilke track make!

PS - I trust that finish line is offset from the start line. 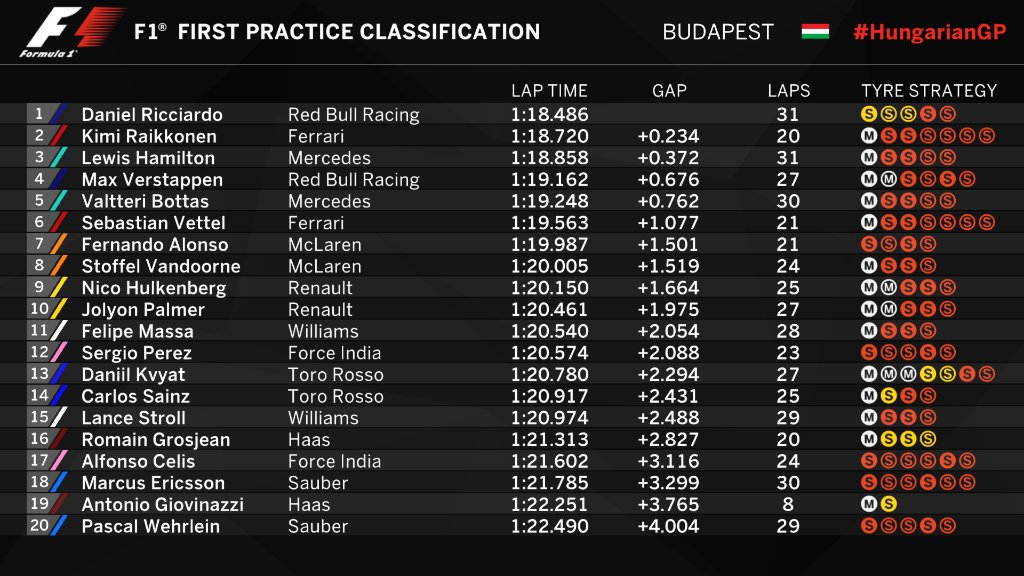 Contributor
That's how to do it, ladies...

Valued Member
Qualifying will be the usual Mercedes "engine turned up to 11" bore fest but we could actually be in for a race this weekend. It's much more a chassis circuit than absolute power so more cars could be in the mix. I'm surprised Renault aren't in the mix and what the bloody hell are McLaren up to? 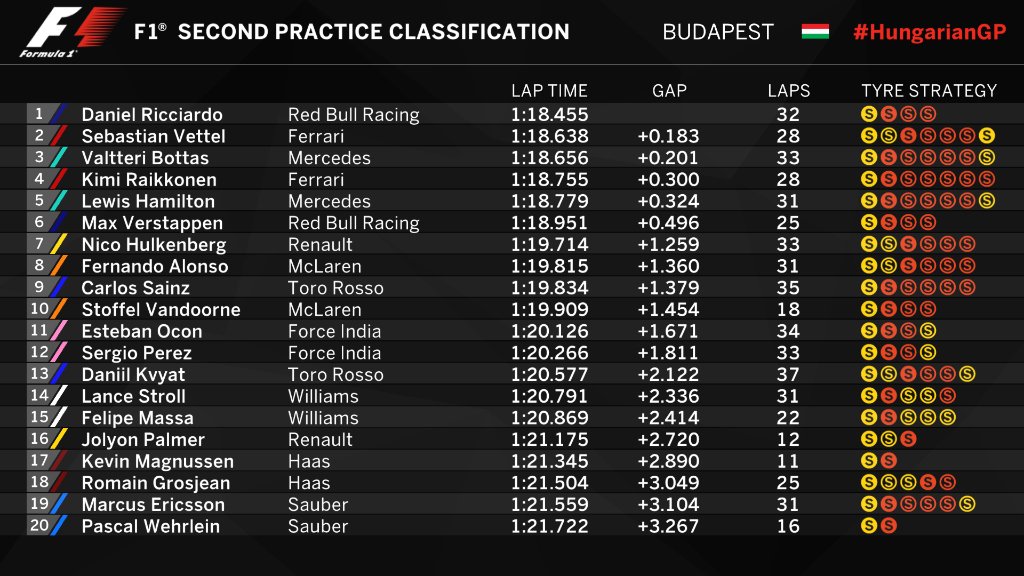 Valued Member
Hamilton got eliminated in Q2 in Monaco, so its not all brilliant for Mercedes at the slow-speed tracks.

Staff Member
Premium Contributor
After showing signs of improvement a few races ago, Williams seem to be struggling again.

Silverstone and Hungary are two very different tracks and yet the Williams has looked out of sorts at both.

Valued Member
Hungarian GP: Magnussen angry that Hamilton 'always gets in the way'

KMag clearly is not a real fan.

Both McLaren's are top 10 after the 2nd practice. A sign of things to come tomorrow and Sunday?

Staff Member
Premium Contributor
Yes if they can stop the Honda eating itself.

Valued Member
The Pits - KMag not the Hulk, surely.

Well done for passing the test!