The phony war is over, F1 returns on March 26th with the traditional season opener in Melbourne, Australia. Lots of changes over the winter. Following the retirement of Nico Rosberg, Valtteri Bottas has left Williams and joined the all conquering Mercedes team. Felipe Massa has come out of what is probably the shortest retirement by any F1 driver to partner rookie Lance Stroll in the Grove team.

Ferrari keep the faith with Vettel and Raikkonen, as have Red Bull with Ricciardo and Verstappen, but there have been a few moves elsewhere. Manor won't be on the grid for 2017, which is a shame. The two drivers who ended their 2016 campaign have moved to Force India (Ocon) and Sauber (Wherlein) where they will team up with Perez and Magnusson respectively. Nico Hulkenberg has moved to Renault where Jolyon Palmer has held on to his seat for a second season. The Hulks arrival at Renault has meant Kevin Magnusson has moved on to Haas to partner Romain Grosjean. Toro Rosso continue with the two who finished the 2016 season, Sainz and Kyvat, and with Jenson Button hanging up his helmet Stoffel Vandoorne will partner Fernando Alonso at McLaren.

We have some new rules for 2017, just in case we had got used to how things were. Bigger tyres, offering more grip, greater down force from the aero with lower rear wings and delta shaped front wings. The under side of the car should also help stick the cars to the ground and we have been promised lap times between 4 and 6 seconds faster than 2016.

What did we learn from the pre-season tests? My take is that there could be some battles between Mercedes, Ferrari and Red Bull at the front but you never know what the teams are keeping in reserve during these tests. Williams and Force India look to be behind the front three but better than the rest. The mid-mid-field will be made up of Renault, Haas and Toro Rosso whilst at the back Sauber and McLaren will be fighting to try and not be in last place.

The cars have been quicker in pre-season, it remains to be seen if we will see the promised reduction in lap times but the drivers seem to be enjoying the cars more and can push them through the corners. The only possible down side is that overtaking could be more difficult with a greater dependency on aerodynamic grip not allowing the cars to get close to one another.

I have great hopes that we should see some closer times between the top teams but I am worried that the races could end up being decided in the final qualifying session on Saturday afternoon. Let's hope I'm wrong.

Just finished watching the final day of testing programme & wow something Crofty said at the end of programme when doing a pecking order for a bit of fun 9th sauber & last Mclaren, then Crofty terrifyingly said a successful weekend for Mclaren would be 2 cars seeing the chequered flag & qualifying within 107%

Now that will set off panic alarms because that what we expect from a Manor HRT or Haas last year not a team that was won 183 GPs, 12 drivers titles & 8 constructors titles
Last edited: 13 March 2017

Assuming this year it'll be 1.18 or thereabouts, then the 107% time is approx 1.23.5. So McLaren should be ok as long as they're within 5 seconds of the pole pace. And even if they're just outside they'll still be allowed to race.

But I don't think McLaren need Crofty's pearls of wisdom to know what a pile of shite they're in. It's sad but they've only got themselves to blame. In a way, young Stoffel might be better placed to beat Alonso if the ageing Spaniard if permanently pissed off, so this awful car might in a roundabout way, allow Stoffel to shine against a teammate who's already annoyed with the car.

That's what I was thinking. He could find himself in a no-win situation as far as the casual observer is concerned s if the car turns out as bad as it seems. If he gets beaten on a regular basis his stock could crumble as quickly as it rose up. But if he does beat him there are plenty who'll be saying Alonso's past it/demotivated/fed up with the world.

You need great drivers like Alonso to turn around a team on the slide; really help develop the car...

Incubus said:
But if he does beat him there are plenty who'll be saying Alonso's past it/demotivated/fed up with the world.
Click to expand

Yeah i can see a Riccardio part 2 happening. As when he was beating vettel its was because he was only winning because it was for a number of excuses, an off year, no motivation, mentally tired or new cars didnt suit him.

One thing that still strikes me is Haas are still having brake problems. Now they can't be allowed to participate in races if they keep having faulty brakes ?

Premium Contributor
Haas must have been very happy in testing, McLaren took the spotlight which should have been theirs. I fear that their second season may not be as successful as their first.

When your cars have dodgy brakes is that not going to put everyone else at risk?

Premium Contributor
Ask Mark Webber about cars having brakes so poor that they have to apply them early.

FB said:
Force India (Ocon) and Sauber (Wherlein) where they will team up with Perez and Magnusson respectively.
Click to expand

You sure about that?

I enjoyed this too much 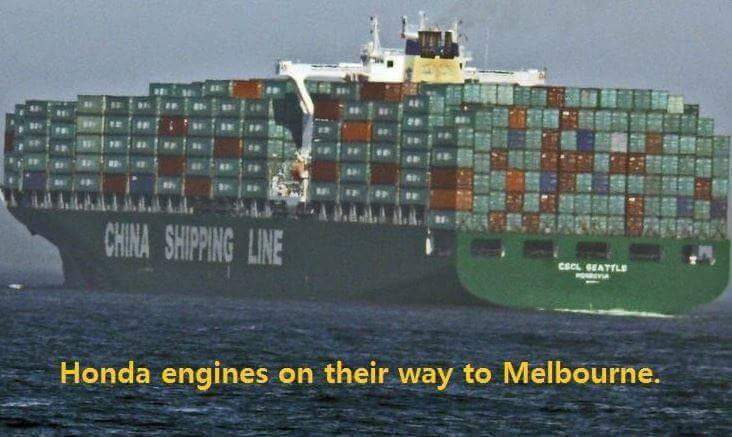 To me this is not a good omen. I had hoped that the added physicality predicted would make the drivers a much larger factor in determining race outcomes. Now, t appears that that may be a forlorn hope.

Contributor
Do we want drivers' performance reduced because they're too tired to focus mind and body 100% at all times on track? Of course we don't want it to be easy but it's simply not, is it? They all put loads of work into fitness and health because without it they'd flake out, so does it really need to be much more of a challenge? If it was to the point of drivers' fitness being a large factor in their finishing positions then I'd be inclined to put that alongside DRS as a false way of creating 'action' on track.

Personally I find 15 minutes in a go-kart a bit of a workout, so anyone who can drive on the limit in one of those beasts for two hours is almost superhuman as far as I'm concerned.

Certainly that is why Monaco was such a challenge as Max Verstappen found last year .. if you push too hard and get it wrong you're in the barrier but that is how F1 should be

I am not a fan of these wide run off areas at circuits and also drivers using gearboxes at a flick of a finger. Put manual gearboxes back in cars and make drivers work

Yeah. These new fangled floppy paddle gear box's that came in recently (1989. 28 years ago) in F1 are just ruining the racing aren't they? To be honest it all got far too easy for the drivers when they gave them seat belts and took away the bit at the start where they all started on foot at side of the track and had to run to their cars and avoided getting killed.

Going back to the past is of course not the answer and would make the sport look pretty silly.

I Don't think attrition is a gimmick though. F1 races have always been marathons and like running and cycling tiredness plays a part in the race. It's a skill of knowing when to push and what your limits are. I'm sure it still comes into play in modern F1 but all the teams and driver are far to media savy to say "yeah I dropped back at the end because I was knacked" - the reason given is always 'slight problem with the car' as it saves face for the driver and keeps his sponsors.

The other reason we Don't hear about it too much is because F1 has come along since the days of fat Nigel Mansell and belly gut Jos Verstappen. Schumacher turned this into a pro fitness sport and all the drivers are probably super super fit and have to be to compete at the top of the sport.

I was always amused at the talk of 18 year olds not being physically strong enough to drive the cars. Like 18 years olds can't compete physically in every sport in existence.

Premium Contributor
After all the laps that Massa put in during testing these cars can't be that physically demanding.

Contributor
But Massa has been on a strict training regime for decades. He retired for about a month and it's not like he's a pensioner. There are older athletes than him compete at top level of sport.

I think everyone is reading too much into all of this if I'm honest. When a 35 year old completes the London Marathon in a good time no one says "well....can't be that physically demanding" you just know he worked and trained to the appropriate fitness level.