Sao Paulo is an enormous city. There are 20 million people in the urban area around the city, which makes it one of the top ten most populated urban areas in the world. To the south, the city is forced into a narrower strip of land between the Guarapiranga and Billings lakes. Between the lakes, as the name suggests, is the area known as Interlagos, containing the Autodromo José Carlos Pace.

At the end of the current Formula One calendar, there are three of the newest circuits in F1; clean, corporate, Tilke. They contrast the fourth circuit, Interlagos. It is unmistakably historic, it has elevation change in a way Tilke could never contrive, it is only 75 seconds a lap and it is fierce. The run from Juncao right the way to the Senna S requires the foot on the throttle for as many consecutive curves as you'll see all season, and it ends with the great Turn One in Formula One.

In the last 10 years, the circuit has offered significant succour to the non-European challengers, with two wins each for Montoya, Massa and Webber. Indeed, it has never seen a victory for Fernando Alonso or Lewis Hamilton, despite them both taking championships here without winning the race, as did Jenson Button and Sebastian Vettel. The only driver to win the race and the championship on the same day was Kimi Raikkonen in 2007.

Mercedes are, as usual, likely to be contesting the win. Hamilton must have extremely mixed feelings about Interlagos, as despite his title win in 2008, he seems to have angered some sort of local deity. His pace around the circuit has never looked particularly bad, but gearbox problems, ill-timed rainstorms and Nico Hulkenburg have cost him the chance to win the race here, with 2009 standing as his only podium. Hamilton has taken victories at a range of jinx circuits this year though, you would not bet against him.

Rosberg, meanwhile, can be proud of an excellent if forgotten performance in 2007 where he beat the BMWs into 4th place, for his best result of the season. He also had the pace on Mercedes team-mate Hamilton at the circuit last year in qualifying, although he relied on Hamilton's collision with Valteri Bottas to beat his team-mate in the end. Both drivers will be looking at setting themselves up for the best possible chance at Abu Dhabi.

Felipe Massa will be hoping to put on a show for his home crowd; of the Brazilian drivers to win in F1 all bar Barrichello have done so at home, and Massa's performances in 2006-08 were matched by his performance as his pace was subsumed under Alonso's title tilt in 2012. Everyone will be hoping that a mixed track like Interlagos may create a close battle between Williams, Red Bull and perhaps even McLaren and Ferrari.

Don't forget that Interlagos is often affected by rainstorms! The rain's appearance nearly ended Lewis Hamilton's title aspirations in 2008, handed Nico Hulkenburg his only pole position in 2010, delayed qualifying in 2009, affected Vettel's run home in 2012 and, of course, gave Jordan their final hurrah in 2003. While I'm sure if there is to be rain, appropriate caution will be demonstrated in the wake of Bianchi's incident, it has been known to joyously shake up many an Interlagos event.

So the penultimate race of the season, a chance for everyone to get into the best possible position for the Ecclestonian hand-grenade of double points to blow the Championship positions apart, and all held at a fantastic racing circuit. Fun, no?
Click to expand

Contributor
Can~t wait. I~ll be on curva Laranjinha supping champagne with the pitlane behind me. Bring it on! Pit access on the Friday, too. Hope the WDC is finalised there.

I'll be in Saudi. Working.

Staff Member
Premium Contributor
Who won the US G.P. ?

Valued Member
I've got a deadline to meet.

Staff Member
Pérez has a seven place grid drop penalty for his collision(s) in the US GP.
M

Contributor
I have never heard of a seven place grid drop I always thought it was five or ten but what the hell he deserves it for that move, if you can call it that..

Contributor
The introductions at the beginning of every race discussion are awesome. They inform and entertain me, I love CTA!

Contributor
Some possible points scenarios on how Lewis can take the title.

Valued Member
It would be a travesty if Hamilton didn't take the title this year but the points system is what it is and it rewards consistency and finishing. If Lewis had carried on in Belgium and picked up 2 or 4 points the situation might not be quite as close. I have the feeling that double points in the last race will be quietly binned for 2015.

Contributor
Cue Vettel taking the title with 4 races to spare

ExtremeNinja said:
Can~t wait. I~ll be on curva Laranjinha supping champagne with the pitlane behind me. Bring it on! Pit access on the Friday, too. Hope the WDC is finalised there.
Click to expand

Unfortunately it can't be, Rosberg can DNF with a Hamilton win and the title will still go down to the final race.

Double point decider for the final race may seem extremely unfair considering Hamiltons win ratio but it has worked out as Bernie wanted it to.

One interesting scenario for Brazil though, Hamilton finishing 10th with a Rosberg win will leave them both on 317 points going into the final race.
Last edited: 3 November 2014
M

Contributor
I've come up with system of how Lewis can take the title..

Win the next two races...

Contributor
Putting him 1 win short of Sebs 2013 record for most wins in a season. 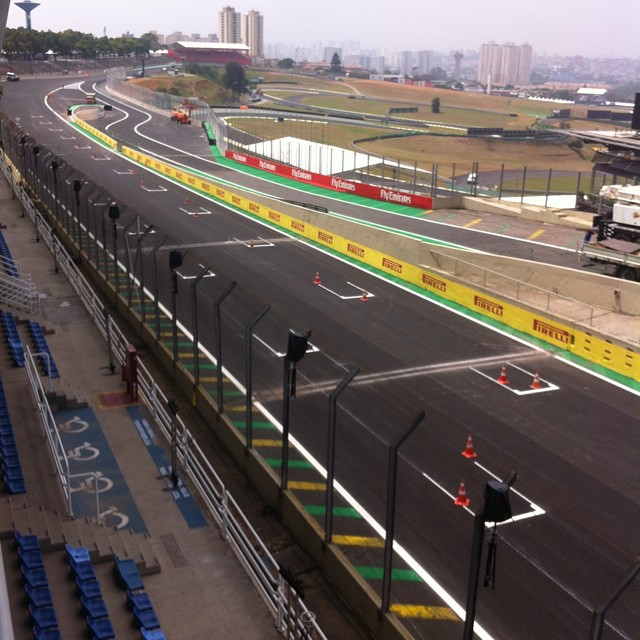 Staff Member
Premium Contributor
Seems sensible enough. That old entry was a bit on the unsafe side with the wall in the middle and an almost flat out run in through the corner.

Staff Member
Premium Contributor
I've got a tough call now, I'm seriously loving turn 1 at Austin but is it better than the turn 1,2,3 combination in Brazil ?? Hmmm I'm not sure.

Rosberg needs to take 11 points off Hamilton this weekend to stave off the opportunity for him to cruise home in 2nd. That's a 1/4, which is obviously more likely in the wet (especially if Red Bull keep up their Suzuka pace).

Everything that could go wrong at Interlagos for Hamilton, has. But his fate is now in his cockpit at Yas Marina.