With the championship nearing the climax, the F1 circus rolls into INDIA for the best race of the season! With Sebastian Vettel winning in Korea to make it three wins on the spin it seems highly likely that he will make it three consecutive titles after taking the lead of the championship from Fernando Alonso in the less competitive Ferrari but he took third in Korea to show that he wasn't giving up.

Korea saw the end of Lewis Hamilton's title chances after a dismal race where everything that could go wrong did go wrong and he ended up with half of the astroturf hanging off the car as he just about held onto 10th place from Sergio Perez. Korea was a less than spectacular race with the top 4 not racing at all with strict team orders in place to maintain formation in terms of the team mates as Alonso couldnt catch Webber so there was no overtaking at the front after the first few laps.

India is another Tilke track and while in theory it promises exciting racing, in 2011 it was the scene of one of the most dominant performances by Vettel as he completely destroyed the opposition and winning by a country mile. It seems that now Red Bull have managed to recapture their 2011 form with the double DNF at Monza being a watershed moment as Vettel has won every race since then. In contrast Monza was seen to be where Hamilton launched his title bid as he went into Singapore closing on Alonso in a faster car. But just 11 points in the next three races has wrecked this and his title hopes are now over.

Despite still being yet to win a Grand Prix yet this year, Kimi Raikkonen lies in third in the Championship with half a chance of landing the championship although it is plainly obvious that it will be impossible for Kimi to catch Alonso and Vettel without winning probably at least 2 of the remaining races, and while Lotus is quick enough for solid points, Kimi is still falling short of the podium and this, along with Red Bulls resurgence means that it's really a 2 horse race with Vettel and Alonso.

Alonso has now not won since Germany and his once formidable 40 point lead has been completely wiped out and he's now second in the championship, this won't have been helped by DNF's in Belgium and Japan, races where Vettel took 43 points and that's where the gap was reduced and while i don't think these incidents will have cost him the title, it will have made it a helluva lot more difficult, particularly with the pace of the Red Bull. Now, it's a case of whoever finishes ahead of each other the most times between now and Brazil, at the moment I would say Vettel is the clear favourite unless the Red Bull's reliability gremlins return.

Write up of the best circuit on the calendar and we are all really privileged to have a Grand Prix there - http://cliptheapex.com/pages/buddh-international-circuit/
Click to expand

Staff Member
Premium Contributor
Can we just confirm that we can believe this is the Indian Grand Prix in India and yes we are all very impressed with how far they've come since the days of the Raj and it is fantastic and brilliant and amazing how F1 can touch the parts of the world that some beers can't reach. Oh and not to forget, we are in India at the Indian grand prix. Now that's out of the way BBC perhaps we can concentrate on the racing!

Valued Member
Are the Beeb even showing this one?

Staff Member
Or lowlights if it's another bloody boring race which is over by the first corner.

Valued Member
(1) The Williams drivers are overdue for some carnage, I think.

Valued Member
Apart from Eddie Jordan's shirt I have no serious memories of last year's race. Having read MCLS' rather dull write up (where's that other bloke who puts a bit of sparkle into these things

) I understand Vettel won, but then he won nearly everything in 2011 so no surprise there. Get ready for pollution, dust, stray dogs and people defecating in the streets. Oh, and abject poverty living side by side with some of the richest people on the planet. The country with a space program which still gets aid from the UK to help it's poorest. INDIA! God love 'em, whichever God it is they have there.

I wonder what malfunction McLaren have lined up for Lewis in this race...

Didn't he get a penalty for a yellow flag infrigement last year snowy ? I'm sure it was India as it was the one bit of controversy in a dull weekend..

I’d forgotten there was an Indian GP!

Galahad said:
(2) Plus there are the patented Massa kerbs at the chicane to catch out the unwary (see (1))
Click to expand

Contributor
Tickets still cheap this year. 3 days in a grandstand for £38. Sounds better than Silverstone for 2013. 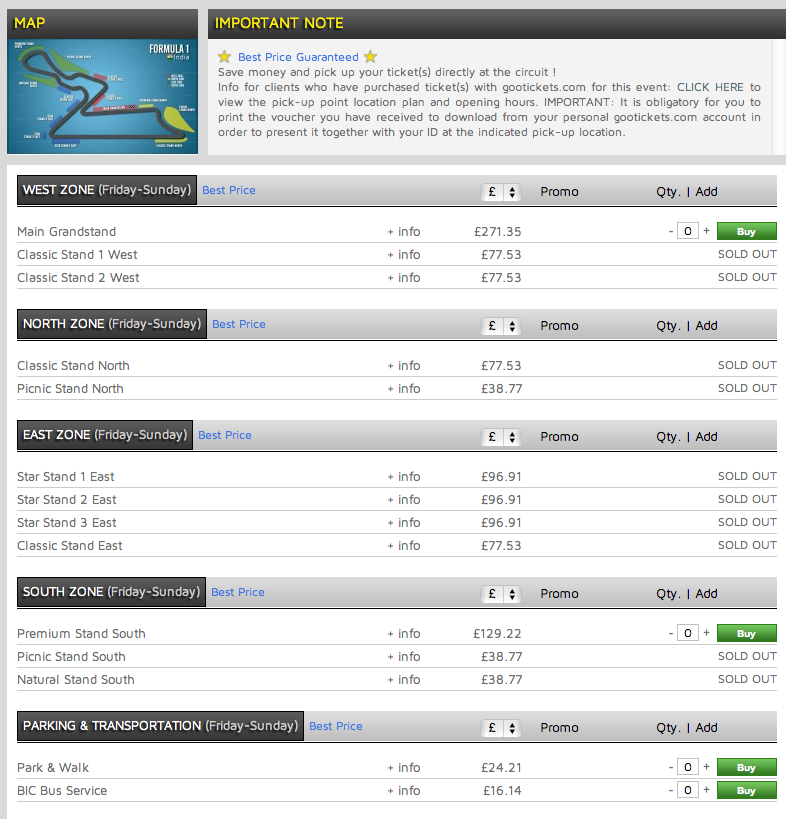 Valued Member
What's good to see is that most of them have sold out, at least unlike Korea the fans turn up to the event

Greenlantern101 said:
Tickets still cheap this year. 3 days in a grandstand for £38. Sounds better than Silverstone for 2013.
Click to expand

Just checked the cost of flights and hotel for 7 nights

I could go to Silverstone 6 times for that money.. in good seats…. but I won't.. not until they apologise.

Contributor
I'm really stunned to find out that last years Indian Grand Prix was the first ever one. I can't remember the bbc mentioning it at all.

India, india. india! Isn't it great driving round the third world? apparently the drivers parade is bring renamed the "ridiculously rich people point and laugh at the poor" parade.

Thing that will happen at the Indian GP:

Mark Webber will get a bad start.

karthkeyen will get his most screen time all year.

I very much doubt the people in the grandstands that week-end could possibly be classified as "poor",

That's the Indian Grand Prix highlights in India.... to you young man.....