The German GP marks the half way point in this strangest of seasons.

There have been seven different winners, with Fernando Alonso and Mark Webber the only two able to notch up more than one win.

From having a car which looked to be well off the pace at the start of the season, Fernando Alonso is still leading by 13 points, from Mark Webber of all people. Can he and Ferrari maintain the momentum going forward?

Indeed, in a drastic reverse of fortunes from last season, Mark is comfortably winning the head to head over his double world champion team mate, Sebastian Vettel.
The Red Bull car appears to suit both drivers though and is the class of the field so expect things to change between the top three before the summer break.

It's a different tale at McLaren. Button has gone from winning the first race to only scoring seven points in the last six races. His team mate, Lewis Hamilton has fared better, despite multiple team errors and the best efforts of certain other drivers. He is however languishing in fourth place in the standings, as are McLaren who have been overtaken by Lotus.

What is clear, is the McLaren is no longer in the top three and some (including Button) are even claiming it is behind several of the mid-field teams. This after the results of both McLaren drivers at Silverstone, where they barely scraped 8th and 10th place finishes.
It's a big change from just a few races ago when Hamilton was leading the Drivers' Championship and McLaren were second behind Red Bull in the Constructors'.

Lotus appear to be getting stronger with every race. Surely it's just a matter of time before one of their drivers is on the top step. Which one though? Romain Grosjean looks every bit as good as Kimi Räikkönen and if not for some unfortunate collisions earlier in the season would most likely be ahead of him in the standings.

Mercedes are consistently inconsistent. Michael Schumacher appears to have broken his dreadful run of results and bad luck but Nico Rosberg had a very poor race last time out, finishing a lowly 15th.

Likewise for Williams; the car appears to have the pace, if only the drivers were capable of exploiting it.

It has been two years since F1 last raced at the Hockenheimring, due to the alternating calendar with the Nürburgring. As a result the teams will have no data concerning the Pirelli tyres, so expect lots of running in the free practice sessions, weather permitting.

Will we see the eighth different winner of the season? Will this race finally reveal the pecking order and see things settling down?
Will McLaren be able to recover their position amongst the top three with their much vaunted upgrade package they are planning to bring?

All these questions and more will be answered soon.

For the circuit write up, stat's, map and videos, see here: http://cliptheapex.com/pages/hockenheimring/
Click to expand

Contributor
To be honest I don't think Mclaren will be anywhere in this race if it stays dry. I he a feeling that this race will be a classic Red Bull - Ferrari battle.

Premium Contributor
Unless McLaren's updates bring them into contention with Alonso and Red Bull Hamilton's championship challenge is over (Button is too far and is still someway of Hamilton, his performances rule Macca out of the WCC for me). I predict Grosjean will win the race (I think he might have won in Britain if it weren't for his collision with di Resta) and Felipe Massa will make a return to the podium. I'll also eat my new McLaren cap if one of the Williams(eses?) doesn't loose part of their car throughout the weekend...

Contributor
Alonso's or a Red Bulls race too lose in my opinion!

I wouldn't count out Mercedes or Lotus and also I feel McLaren with their upgrades might be competitive in qualifying, just probably not in the race unless the circumstances suit them perfectly.

Grosjean will take a five place grid penalty because they need to change his gearbox: http://www.autosport.com/news/report.php/id/101167
M

Contributor
I hope McLaren solve their problems eventually but I don't think they will for Germany..

Staff Member
The soft and medium tyres have been selected.

For Friday there will be two sets of the new prototype hard tyre for each driver.

Contributor
Does anyone know where the DRS zone is?

Contributor
Should have been between turns 1 and 2, but ah well. 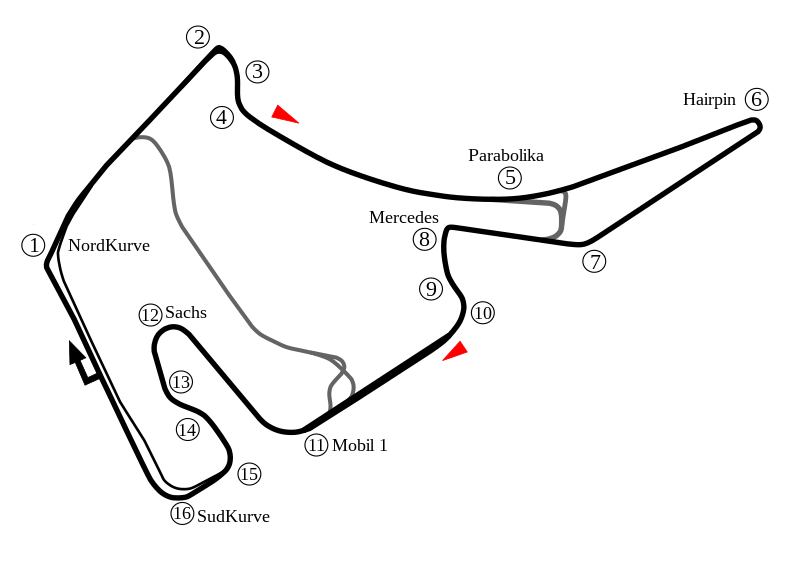 Here's a circuit map, where would you put it?

Valued Member
Maybe from the Nordkurve up to Turn Two would be the best place, since that would also open up the chance into Six.

I agree with that, so you can get a good slipstream down the Parabolika to potentially repass, but maybe they shouldn't have put it in a natural overtaking spot cus we won't get much overtaking into Turn 2 now

Contributor
The map of this "circuit" reminds me again of how great the old Hockenheim was. Look what has become of it: Apparently this is the old Ostkurve 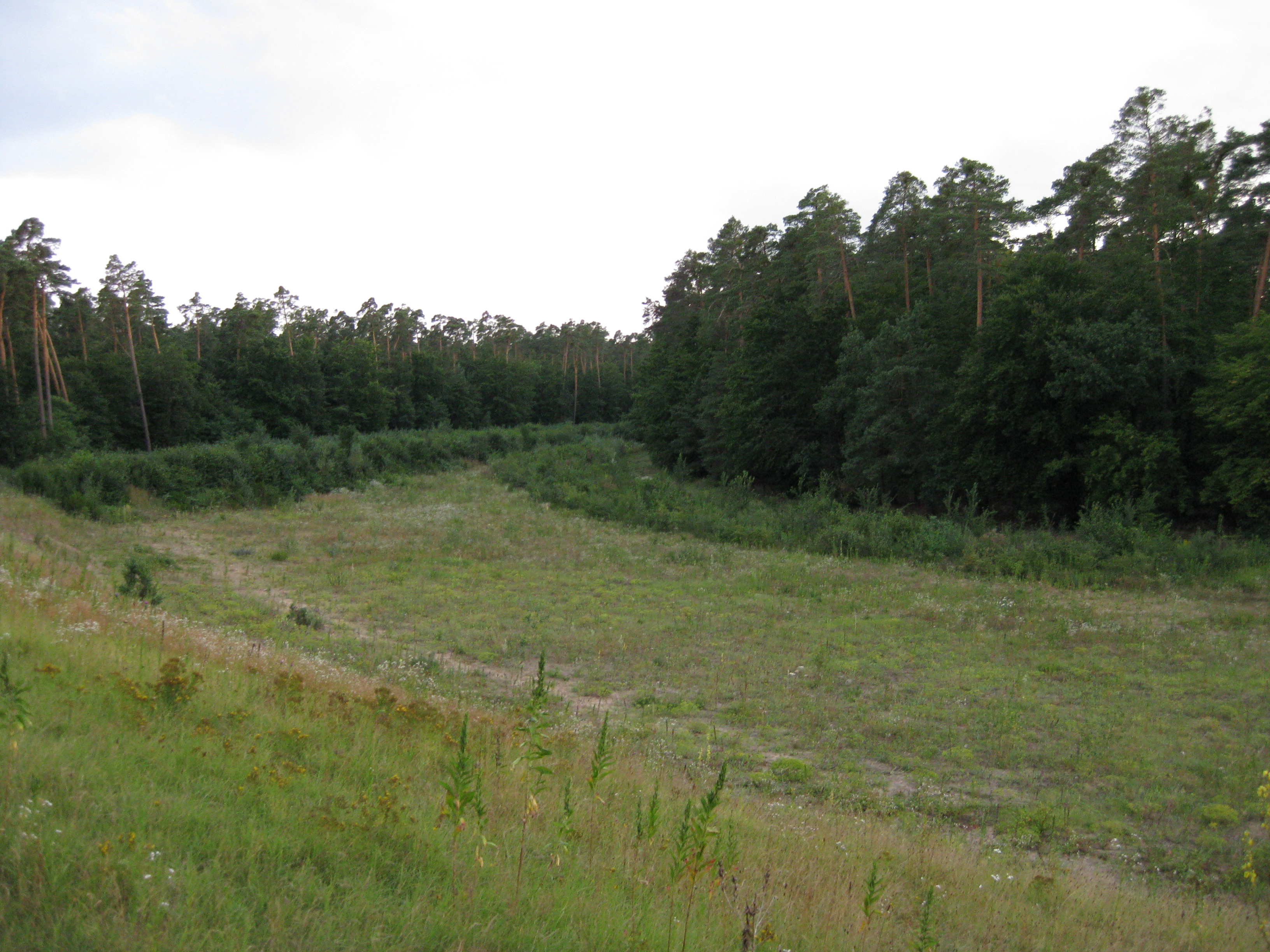 Contributor
Bring this weekend on, lets hope it's better than the snorefest the British GP bought us.

GermanF1 The wikipedia has an even better picture of it: (warning: large picture)

I've never watched a race on the old Hockenheimring but it's kind of sad to see.

teabagyokel said:
Maybe from the Nordkurve up to Turn Two would be the best place, since that would also open up the chance into Six.
Click to expand

Warwick Pugh said:
New bodywork package coming on nicely. Just a few finishing touches tomorrow then its down to LCH & JB to pull something special out the bag.
Click to expand

It will be interesting to see what effect the McLaren upgrades have, if any.

Up to turn 2 would have been great. But with the degree of righthanded hairpin coming after a long sweeping left, it could the racing lines very interesting to watch..

That being said, I like what teabagyokel had to say when putting the DRS being 1 and 2 would create a lot of great chances into the hairpin. Those passes would maybe be more "pure"