Valued Member
For the next in the series, two men for whom 2011 may well turn out to be a landmark season, though certainly for both also a season to forget. 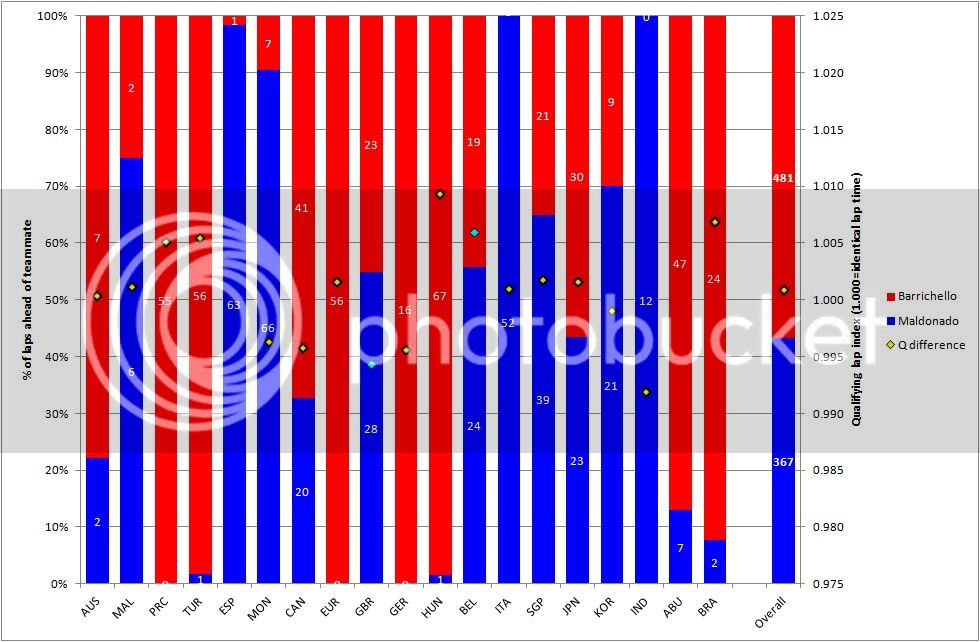 
Q2 times have been used for the qualifying comparisons in all cases except MAL, HUN, KOR and BRA (one driver failed to progress), and AUS (Barrichello failed to set a time in Q2) when Q1 times have been used. For the Spanish GP Barrichello's time was hampered by a gearbox problem and ended up off the chart (1.042). No time was recorded by Barrichello in any qualifying session in Abu Dhabi. The overall qualifying comparison therefore excludes Spain and Abu Dhabi, as well as the two wet races.


So it seems that Rubens slightly edges it, but it was fairly close. Maldonado was impressively fast in Monaco, continuing his exceptional GP2 form, and qualified well again at Montreal, though blotted his copybook by spinning out of the race.

Unreliability and first lap incidents have had more of an effect on this pairing than for most; Pastor had four mechanical failures and two driving error-related ones, while Rubens had three car failures, plus first-lap contact at Monza and Buddh.

Contributor
Even I understand that chart G - thanks

So, what you're basically saying is that Maldo was the faster qualifier (despite Barrichello being no slouch in qualifying), but Barry managed to produce better race performances??? (That's my reading of it anyway)

I think I've mis-interpreted the qualifying spec... But Barry only has a small advantage over the season in Quali....

Valued Member
Although Maldonado was only ahead 5 times in dry qualifying compared to Rubens' 10, when Pastor was ahead he typically had a bigger advantage over Rubens than when the reverse situation occurred. Hence, averaging over the season, Rubens' advantage in laptime terms is small - 0.0008 (0.08%) equates to 0.075s assuming an average circuit with a laptime of 1m30s.

Staff Member
An interesting set of results, but what does it tell us?

Is it that Barrichello and Maldonado are evenly matched?
Or is it just that the FW33 is so bad that no matter who would be driving it, the results would be about the same?

What I mean by that is a car with better performance is more likely to highlight the difference between drivers as the better driver will be able to get more out of it.