Staff Member
Premium Contributor
Here's a little something to keep us amused for half an hour while we wait for the long summer break to end and the season to begin again.

Let's imagine, much like the classic Bill and Ted film, that you've invented a time machine and have gone back in time to assemble the your greatest grid to replace the current teams for the remainder of the season. Who would they be and in which cars?

There are 22 drivers spread across 11 teams so who would you replace them with?

The only rule I'm going to set is that the drivers you choose must have driven for the team you place them in for example, if you choose Gilles Villeneuve you could put him in a McLaren or a Ferrari but not a Red Bull. The only exception I will make to this is for current drivers as there are only a handful of people who have ever driven a Red Bull for example, so you could place those guys if you wish to include them, where ever you want.

So, let your imagination run wild.

Contributor
Under these restrictive rules, I can not add drivers who have only driven for teams, that don't exist anymore (like Jackie Stewart)..

Staff Member
Premium Contributor
Yeah, German F1, you just put them in their respective cars, In Stewart's case you could put him in a BRM, A March, A Matra or A Tyrell. You can bring back any team or car you like. You just have to use drivers that actually drove for those teams, that's all.

Staff Member
Premium Contributor
My greatest grid would be....

That for me would be the ultimate grid. I had to give Hamilton what would surely be his ultimate dream of driving alongside Senna in the awesome MP4/4. Despite what I may think of him, Schumacher has to be on the grid. There are a few drivers on there for a bit of fun as well for example, Alan Jones and Jean Alesi. Mark Webber is on there because he was saying that there were better drivers around when he started plus I wanted a Red Bull on the grid and it was either Webber or Coulthard in the second seat.
Last edited: 8 August 2013

Valued Member
My teams have brought a mixture of chassis for their two cars, hope that's ok? Some picks are for quality, some are just favourites of mine.

It wouldn't be a proper F1 grid without some Arrows and Minardis at the back now would it?
Last edited: 8 August 2013

Staff Member
Premium Contributor
That's fine Galahad, it wasn't uncommon back in the day for a two drivers to have different chassis in the same season.

The MP4/8 is an interesting choice of chassis for McLaren. (it did make me realise I'd got the wrong McLaren and edit my list to the MP4/4 which is the car I'd actually had in mind).
Last edited: 8 August 2013

Valued Member
Think that was Ayrton's best season, even if he finished up empty-handed. Better-looking than the Honda-powered cars too, in my humble opinion.

Here are my established runners.

These guys are forced to pre-qualify.

Supporter
I have a feeling Keke might have had the upper hand in that Turbo Williams.

Valued Member
An attempt at a grid, including as many of the best as possible, but with a significant modern leaning due to my own experience: 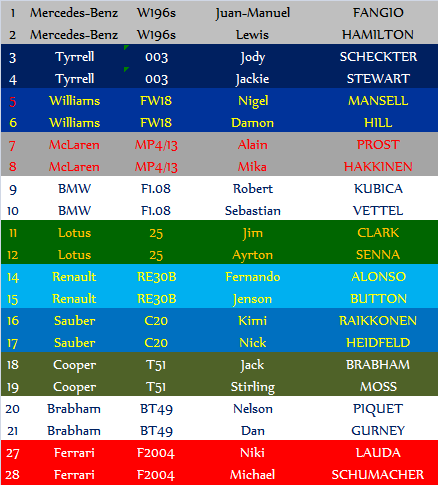 No Red Bull because I'd rather include Heidfeld than Coulthard or Webber, but if Kimi does go there then Red Bull can be Kimi and Vettel, with BMW as Kubica/Heidfeld.

Numbers as much as possible to match iconic/numbers used and a hat-tip to the great Fangio.
Last edited: 9 August 2013

Just for fun, I've put the past twenty champions (plus GV and JA) into the teams which aren't most associated with their success.

Alonso has had 11 wins for Ferrari (so far), and Mario took 1 win there; Lauda took 2 wins for Brabham; Prost 9 wins for Renault; Hamilton 1 win for Mercedes (so far); Scheckter 4 wins for Tyrrell; Hunt 1 win for Hesketh.