Williams – How long can they go on?

Staff Member
Premium Contributor
It’s hard to imagine given that they were one of the teams to beat in the 80’s and 90’s that four races have passed this season without Williams scoring a point. If they fail again in Spain they will have matched their worst ever start to a season. This year they are only in a slightly better position due to fewer retirements and some better classified finishes but, no points is no points whichever way you slice the cake. It almost seems as if they have been forgotten about.

It’s been almost 10 years since Williams finished runner up to Ferrari in the 2003 season and since then it has been a story of steady decline. Their end of season positions for the last 10 years look like this:

To put that into context, the final 10 years of Team Lotus looked like this:

For a while Williams could perhaps use the fact that they were running Cosworth engines as a reason why they couldn’t match the performance of the top half of the grid however for the last two years they have been running the same Renault engines as those in the Lotus-Renault and in the Red Bull. Having made the decision to run drivers who could bring some cash to the team it highlighted the lack of resources and the clean areas of paintwork suggest a lack of sponsorship as well.

In these tough times, F1 remains an expensive game and with only 1 win at last years Spanish grand prix plus 3 other podium finishes since 2006 you have to ask, will Williams ever be able to regain a place at the front end of the grid or are we witnessing the long kiss goodnight of another legendary F1 team? How do the team at Grove set about re-building their fortunes or is it already too late?

Will they ever? Yes.
Will they soon? Not with their current drivers.

Valued Member
They need to make themselves an attractive proposition for a manufacturer partner (or owner). Last season they were exactly that, so they need Coughlan to work his magic asap.

Williams F1 as a brand continues to be an attrative one but in order to succeed the team needs to be sold, new sponsorship secured and better drivers hired. Back in 03, even though the chassis was not the best, a powerful engine and a good pair of drivers almost won them the title. This was the time when Ferrari was at the absolute height of their power and Adrian Newey was working at Woking. Anything is possible but something's gotta give.

I've read somewhere that Toto Wolf is selling his shares. Expected I suppose.

Contributor
Williams need a large infusion of cash very quickly, lest they become a latter-day Brabham team that fades away. Their present drivers are doing them no favours in attracting new sponsors--only good results will do that.

Unfortunately what Williams really need isn't available to them: thirty years each taken off Frank and Patrick Head's age.
They've seen it all, majors sponsors came and went, as did drivers, technical reg revolutons, tragedies... and throught them all they stuck at and kept coming back stronger throughout. The strength of their partnership was the driving force behind the team.

Now they've gone or semi-retired and there's no-one out there with their aura or drive.

There's always hope but it may take new thinking/approaches. I hope Claire Williams is as smart as she seems and will bring in some fresh young talent to the design shop, factory and management team. If that is balanced with some good old fashioned head hunting for some experienced department heads there's no reason why Williams F1 can't rise again.

Hopefully Claire's youthful enthusiasm and energy won't be used up focussing just on fundraising and PR and that she has an able team for that as well. It's going to be interesting time for F1 with two women now in senior team leadership roles and it will be interesting to see if there is a distinctive mark made upon their teams and F1 as result.

Edit: Just had a quick scan of Williams personnel on their website. Looks like a fairly fresh but by now bedded in bunch of people.

Valued Member
Interestingly, the reason for the loss was related to the fact that they cannot claim over 9m of prize money in the accounts, as it is only paid if the team sign up to the end of 2015 (I believe)

I am not sure if this is standard fare, or if there are wider implications here.

Problem I see with Williams they need someone who is a good enough successor to take over the mantle from Frank and Patrick...unfortunately Frank is a hardman and does not want to part with his team easily

the problems with Adam Parr and now Toto Wolff leaving is no doubt causing management and leadership concerns .. a lack of direction is apparently one of their main problems this season

Claire might take a while to find her feet ...Williams as a team really need a manufacturer support to get it fully back to the front although Renault have been very good to them

I think they can still win races as they have a bunch of good engineers but not titles ...maybe Ross Brawn could be the answer- he use to work for Williams

Valued Member
Not very much longer by the looks of it 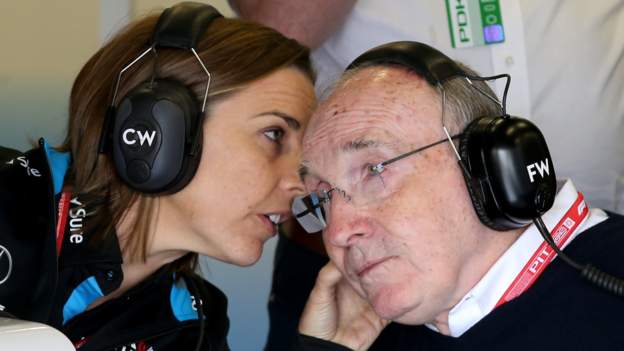 Williams up for sale after £13m loss

The Williams Formula 1 team and wider company group are up for sale after posting a £13m loss last year.

Premium Contributor
The face of formula 1 could be very different after the pandemic.

Staff Member
Premium Contributor
Sir Frank has done an incredible job in F1 considering his medical condition but Williams have been making up the numbers since 2004.

It will be sad when the Williams family step away from the team but the sport has change immeasurably since they last won a title in 1997 and given that they have failed or chose not to, attract works support from a major manufacturer they are competing with one hand tied behind their backs.

The writing has been on the wall ever since Sir Frank fell out with BMW in 2005.

I'm struggling to understand their motivation for terminating the sponsorship with Rokit...

This sounds a bit too much like Rich Energy - were Rokit not paying their bills?

this is weird because i never thought id see that team sold while frank is alive & very weird timing before the cost cap that will make F1 sustainable if its 12 yrs late. & is why cost cap is a must because once you start when you price out the privateers then you are at the mercy of manufacturers. who can pull out at any moment

cider_and_toast i was watching a rerun F1 been doing on youtube & watching the full length 1997 title decider from jerez (for the 1st time) & in final laps murray walker said something like "when Adrian newey left for McLaren. they said this is the end of williams they will fall away now, but theyve proved me right & everyone wrong. as they coming to become world champions once again. williams will still be a force" it did make me quite sad as murray wouldn't know what history had in store Villeneuve would never win again, Williams wouldnt win a race for another 3 1/2 yrs & only 11 in total since

& shame the aquafresh livery will never be raced

Valued Member
The pandemic may have done Williams a huge favour as they will probably have furloughed most of their staff for the last 10 weeks and not had to pay them. Then again, there won't have been much progress on the car.