Contributor
Finally everything in place. 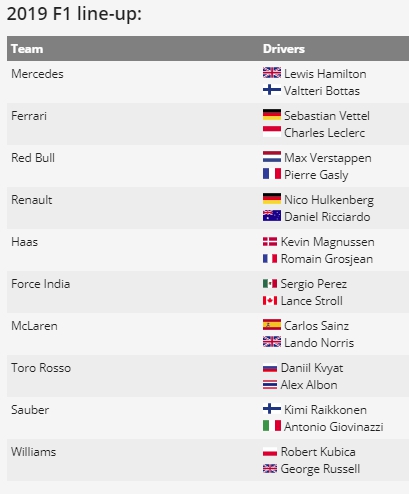 F1Brits_90 You think the 3 guys promoted to F1 are British born .. Albon did race under the British flag I think so it makes good PR to say there is life after Hamilton for upcoming British drivers if anticipated that Aitken, Illott and Ticktum will be in F1 soon suddenly it looks good . I mean at one stage the grid was dominated by Brazilian drivers and German drivers

Nico Rosberg he raced under Finnish flag then from Gp2 onwards raced under the German flag .

I am looking forward to see which driver at Force India gets their career ended by the other . Perez - will never get a top drive now and Stroll - I don't see how Ferrari or Mercedes (although they are sponsored by Tommy Hilfiger) would sign him as a potential world champion

RasputinLives I guess you find Kelly annoying on Formula E

Contributor
Do you mean I find Albon coming to F1 annoying on Formula E? If so then no. Oli Rowland got the spare seat and he is more exciting to watch anyway!

Il_leone said:
I am looking forward to see which driver at Force India gets their career ended by the other . Perez - will never get a top drive now and Stroll - I don't see how Ferrari or Mercedes (although they are sponsored by Tommy Hilfiger) would sign him as a potential world champion
Click to expand

Stroll's father has loads of money and Perez seemingly has quite a few shares. I don't see either of them having a short career of twenty years or so.

Contributor
I don't think Perez has had a chance at a top drive for about last 5 years now.

Il_leone said:
RasputinLives Well he kept making he was in contention to replace Kimi plus he did have an offer to join Renault which he turned down which he will rue long term
Click to expand

I keep hearing that Renault thing but it only seems to come from Perez himself. I seem to remember Renault had two locked in drivers at the time. Also his connection with Ferrari ended after he went to McLaren and he was never going to get the nod over Bianchi anyways.

Let's remember there is a lot of money around Checo and plenty to spend on spinning speculative stories in the media designed to whip up interest.

The Renault deal he said he turned down because there was a lack of leadership in that team before they offered it to Hulkenberg Its a strange thing to say and ignore when you want to prove you;re good enough to be No 1.

Checo keeps saying he desires to be world champion but even with Carlos Slim backing him he can't get Ferrari to consider him, yes he's got plenty of money but he will be always a midfield man who occasionally punched above his weight

Contributor
If you Google Perez and Renault he seems to claim he's turned down a Renault deal every year since 2016 - including for 2019. I think it's BS.

RasputinLives I guess he does not have a good PR to convince others that he is a world class driver. He now comes out saying he has no regrets because he was best of the rest for the last two years but this season he was not because he was beaten by a Renault driven by his former teammate

Ricciardo still wonders who vetoed his move to Ferrari

A bit academic but interesting to know who did not want Ricciardo at Ferrari. Then he leaves it with he still would to drive for Ferrari one day

Contributor
Translates as 'I'm better than LeClerc, I am I am!'

It's blatantly obvious who blocked his move...

Contributor
It was almost certainly a German Ferrari driver Il_leone . Let us know when you put it on Twatter.