Valued Member
Heavy speculation that this will be Jose Maria Lopez' last race for Toyota...he's not doing anything to change the team's minds...

i can see that he is 36 & is weakest member. doing pretty terrible in Formula E. its obvious that his WTCC titles were down to citroen having a car head & shoulders above anything. anyone could've won a title in that car

Valued Member
Anyone who can beat Yvan Muller is a very decent touring car driver in my book, but those skills wouldn't necessarily translate to the WEC. Either Brendon Hartley or Thomas Laurent would be a better choice for next season.

Valued Member
Brenda is in for Fernando after this race isn't he?

Galahad said:
Anyone who can beat Yvan Muller is a very decent touring car driver in my book, but those skills wouldn't necessarily translate to the WEC. Either Brendon Hartley or Thomas Laurent would be a better choice for next season.
Click to expand

i think this is #7 year barring disaster. just seem to have the quicker car & #8 is holding on hoping for fortunate safety car to keep in range

Valued Member
Certainly looking good for #7 at the moment, later safety cars overnight gave them back their prior advantage and they're now able to extend it pretty consistently - out to nearly 2 minutes.

The #92 Porsche was vying for the lead with the #51 Ferrari, but had a 20min pitstop at about 3am for exhaust and floor repairs, leaving #51 with a crucial advantage over the chasing field - now extended to about a minute (though the chasing #63 Corvette is off sequence on pitstops and so rotates into the lead periodically).

Oh yes, and Maldonado crashed into the barriers and into retirement at Tertre Rouge - no other cars involved.

i still have my doubts about alonso victory last yr & whether it was that he won because he was the best or was handed victory by toyota as they decided. because tom kristensen said this morning the number #7 has always been the faster car this super season.

how is gianmaria bruni 38. i assumed when chatting about him i thought mid 40s as he been around since early 00s

Valued Member
I don't know if they fixed it or not, Pascal Vasselon has denied it, but then he would. If the issues were genuine, then I really feel for them because they're going to get a ton of criticism. Not as much as I feel for the crew of car 7 though.

F1Brits_90 said:
i think this is #7 year barring disaster
Click to expand

sorry for the commentators curse

gutted for Conway & sort of kobayshi as he was entertaining in F1 , that team deserved to win this year. got pole & dominated for 23hrs. as the #8 never had a answer, but terrible luck in last hr that's is so painful for the #7 car because but that is le mans all over you can dominate qualifying & 23 hours of the race all of a sudden what seemed a comfortable win is ripped away from you with a faulty sensor after a puncture. Conway just doesn't seem its his destiny to win it . the quickest car all super season but bad luck in both le mans. now a 6th podium without a win but Anthony Davidson knows all too well, its never over til over when his car broke down on the final lap. 1 of the most heartbraking ends to sporting event I have ever seen

on the controversy again this is not as clear as 2018 when we all assume Alonso was 'given' it. but i believe it was just bad luck unless Toyota are even more sneaky than we think

Valued Member
Now I'm not one for conspiracy theories but that sensor problem on the No. 7 Toyota was very convenient wasn't it.

FB said:
Now I'm not one for conspiracy theories but that sensor problem on the No. 7 Toyota was very convenient wasn't it.
Click to expand

You have been before though especially when it comes to Alonso and cyclists.

Contributor
A classic race at the head of the field by no means. The less said about that the better. I don't think i even looked at a Toyota all weekend, quite deliberately. However, aside from that there was some great racing, all except for Aston who got totally screwed by an overnight change to BoP... I had no idea until much later, we spent the morning ensuring we were fully hydrated, then felt we should continue into the afternoon. You cannot be too careful with these things and I assure you we took no chances there. Once we made it to the roof-top viewing-bar at the Porsche curves around 2:30, i could relax a little knowing that keeping hydrated was just a 180 degree turn and a nod to the barman. So whilst i still had 'some' mental capacity left Saturday afternoon, much was spent scratching my head as to why they had qualified first and, immediately the race started, carefully manoeuvred themselves to the back of the grid.

BoP working its magic as usual! They used to do exactly the same to us in British GT so nothing changes.

the problem of dominance in a series 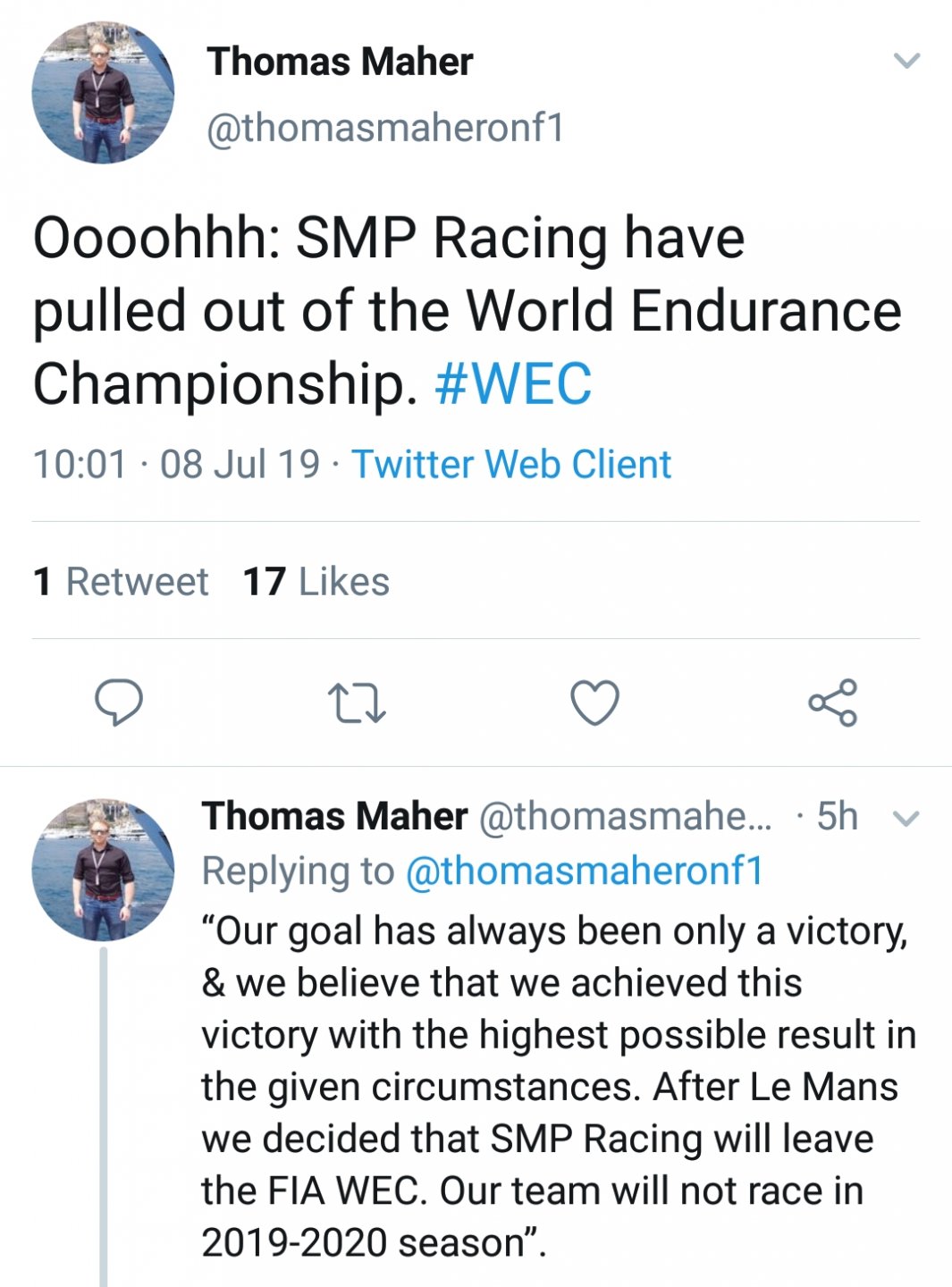