Premium Contributor
I agree with Road of Bones though, they have been reading this thread.

Contributor
I enjoyed that last night.
Question, do you think the 8k bicycle was Hammonds own bike?

Staff Member
Premium Contributor
Not sure but I did laugh out loud and winced a lot when he came off it.

Yeah, it was way better than the season opener from last year (the very scripted (sorry Mr Sniff but it was) car chase around the shopping centre).

I also like the way they are wearing "Chile" flags on their jackets. Now I wonder why that could be ??

I didn't see the jackets - will have to rewatch. I thought it was a decent first show but not a classic.

Premium Contributor
I enjoyed it. I even liked the Lamborghini in lime green!

Valued Member
The forgotten Top Gear presenter, in 2002 Jason Dawe was James May. Or is it that James May is Jason Dawe? Anyway, he only did the first series which doesn't even make it on to Dave these days.

Contributor
He wasn't really a main presenter. From what I remember he had a sort of used car salesman news pitch that lasted 5 minutes. Taking over from Quentin Wilsons former role on old top gear.

His section was informative and useful so it was axed. 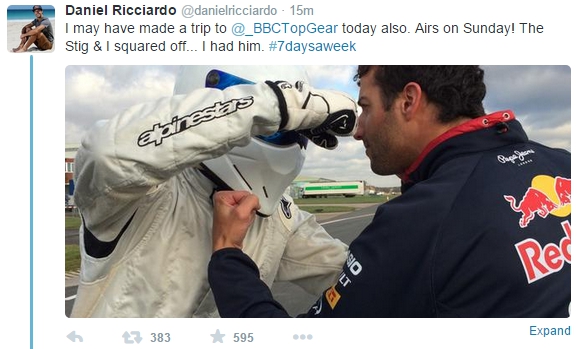 Contributor
Absolutely loved the most recent episode particularly the ongoing theme of taking the piss out the Argentinians with the number plate thing....
Last edited: 4 February 2015

Premium Contributor
Who do you think the Ausie Stig was ?

Contributor
Could of been someone off the V8 supercar series if I had to guess.
M

Contributor
Too weighty to be Skeletor Titch

Premium Contributor
Maybe he's put on bit of weight since he left F1 ?

I lost interest around 2010, they just started doing the same stuff over and over again, it most of the time it was just Jeremy Clarkson and Richard Hammond trying too hard to mock each other, especially the latter.

The show doesn't even seem to be about cars no more...just three buffoons patrolling about.

Staff Member
Premium Contributor
Another funny episode of Top Gear last night. This season has seen a return to form.

The preview of last nights show made it look rather unfunny but in reality it was a pretty good one.