The reality is that the points system is the most logical compromise to try to ensure the most deserving driver and team over the course of an entire season get the championship; if the current system is the best it could be is up for question but medals are not the way to go about it, I could not in all good faith support a system which made great drives like Jenson at Monza or the recovery drive by Lewis in Malaysia relatively worthless; if qually went wrong you might as well park up and save the engine cycles.

I like my NASCAR but we all know that the chase system barely works for them and the relative size of the grids and numbers of races make it impossible in F1; however I would support the adoption to F1 of extra points for leading laps or qually etc. How about extra constructors points to the team which has the fastest cumulative pit stops (both drivers times added, if one car retires before the pit then the team are ineligible for the extras) .

BlackCountryBob said:
NASCAR gives 190 points for a win, does F1 need to look a maybe more points, going from 10 to 25 has meant there are 5 drivers with a chance, what if 50 was a win, or 100? Just a thought.
Click to expand

Nope.
All it needs to do is have larger points differences between each position.

The old system versus the new system is as follows:
So as you can see, as a ratio the 2 systems are almost the same.
This has been borne out by the fact that there would be almost no difference this year no matter which scoring system was used.

What they should have done is increase the gaps so it would give you a ratio as follows:
This increases the worth of the top 5 positions relative to the old scoring system, making it much more worthwhile to go for a win.

teabagyokel said:
And anyway, why does he cite the Olympics in all of this...
Click to expand

Someone was arguing, on that other forum, that the real reason that Bernie is pushing the medal sysytem is that he has a masterplan to get F1 as an Olympic event, beginning with Rio. All the IOC's boxes have been ticked off except the awarding of medals.

Contributor
On the subject of possible plans for an Olympic Grand Prix event, I just found these Joe Sayward blogs, linked from the BBC F1 website's gossip page:

Brogan said:
What they should have done is increase the gaps so it would give you a ratio as follows:
This increases the worth of the top 5 positions relative to the old scoring system, making it much more worthwhile to go for a win.
Click to expand

Interesting, kinda where I was going in a round about way, if a win was 50 points then maybe second could be only 25 points etc, if 1st were worth double 2nd then it would really be a big deal to go for the win but would not be utterly fruitless if you ended up 4th or 5th; regardless, the medal system is a bit dumb.

Staff Member
Just for interest, here's a table showing the current points system with the gap to the leader and also using the new points I suggested above (25, 15, 10, etc.).


The only difference is Nico Rosberg and Robert Kubica would switch places but the gaps are generally larger thereby rewarding those more who finish on the podium.

Valued Member
For want of something better to do on a Saturday afternoon here is the drivers championship based on points per position. Any driver who has not taken part in a GP gets a 24 point score.

Alonso is quite a big gainer under that system, as is Massa.

Don't let the FIA see that

And an Olympic Grand Prix is a sodding awful idea that would betray 114 years of Olympic tradition. Since the Games would be incidental to F1, then the F1 should not have the Games. It has a shop window all of its own and it would be ridiculous to require an F1 circuit at an Olympic city.

Contributor
Is this going to continue on this year?

I for one would like to see the comparisons, however if you are not, I understand due to it been 2 years now since the system has been changed 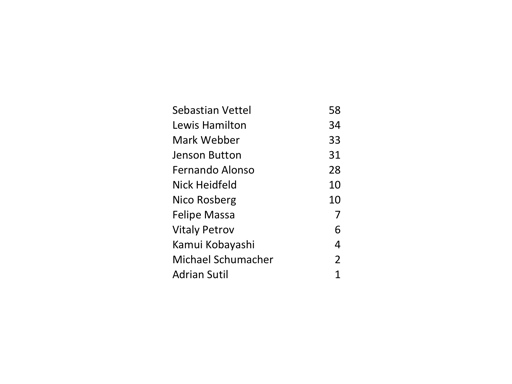 Contributor
How strange does that look now

thanks FB :thumbs up:

Hmmm. Doesn't look such a done deal like that, does it. Might have to rethink my pessimistic positioning. Glass half full or half empty?

It also shows my table is wrong

Fenderman said:
Hmmm. Doesn't look such a done deal like that, does it. Might have to rethink my pessimistic postioning. Glass half full or half empty?

The main difference is 10 drivers are awarded points, instead of 8.

Valued Member
This is the actual table 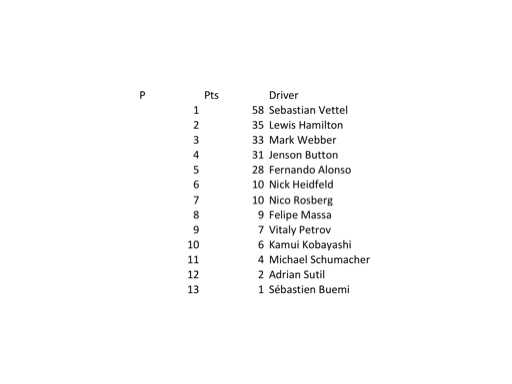 Contributor
Interesting that Alonso, Hamilton,Barrichello and Schumacher are on that list and yet none of them won a WDC that year and that under this system Alonso beat Hamilton in 2007.

Watering the track during a Grand Prix
2