Brogan said:
1. It's different from all other series as there are 3 races per weekend at 10 different circuits.
Click to expand

So it is 10 race weekends. Not like NASCAR with its 36 races a year. One of the nice things about F1 is that you are tempted to watch every race.....so there is a story. If it gets more than 20 races.....then this kind of becomes a burden. I wonder at what point does it get to be too much.

i think BTCC is very good series. 30 races over 9 venues & 10 rounds they are only 25/30mins a time Ruslan im not fan of weight to the current extent in reverse grid because you want all drivers to have some chance instead of dropping helplessly down the order. 2020 calendar looks good using both Silverstone layouts top & bottom

in case we have any fans, British Touring Car Championship starts tomorrow at Brands Hatch on itv 4 & finishes as usual at 12 October. but for the 1st time it wont be visiting Rockingham instead Thruxton twice 19th may /18th August. along with other Croft 16th june, Oulton park 30th june...

Drivers 100% sure F1 focused on wrong fixes
Click to expand

Well, drivers aren't alone, and merely confirming what many (old) fans have been saying for years.

“Before changing the format, I think we first need to see a F1 with a tight field and with cars that are able to follow,” said Sainz.
Click to expand

Tires were always part of racing, but I personally think if any racing component (engine, tire, aero, car weight, fuel saving, equipment saving) becomes dominant subject of regular discussions after each race, than something wrong with it, and correction is need. Balance and proportionality for subsystems should be in focus, rather than reverse grids and similar nonsense. I am really sick and tired of hearing about cold tires, not enough heat in tires, and so on. With fondness I recall time when Prost was in final stages of the race on worn out Good Year tires, and Murray Walker was counting laps, warning his audience, that tire might blow up any moment, and we shouldn't count chickens before Finish line get crossed. It was something I could relate to, it was real finale, instead what we see now with artificial slow down of the field so we can save equipment...Tire shouldn't make you one day hero and darling of the crowd, and next day outcast just because it was out of optimal range. These are issues FiA should focus on, instead bouncing around with really secondary problems.
Last edited: 26 September 2019

according to Albert fabriga on twitter. whose on spanish tv & great tip of people from ted kravitz to follow. had a great thread. we may be getting a new spanish team in 2021 it seems quite far down the road. i would say hope they are better than previous one but to be fair its not humanly. to be worse 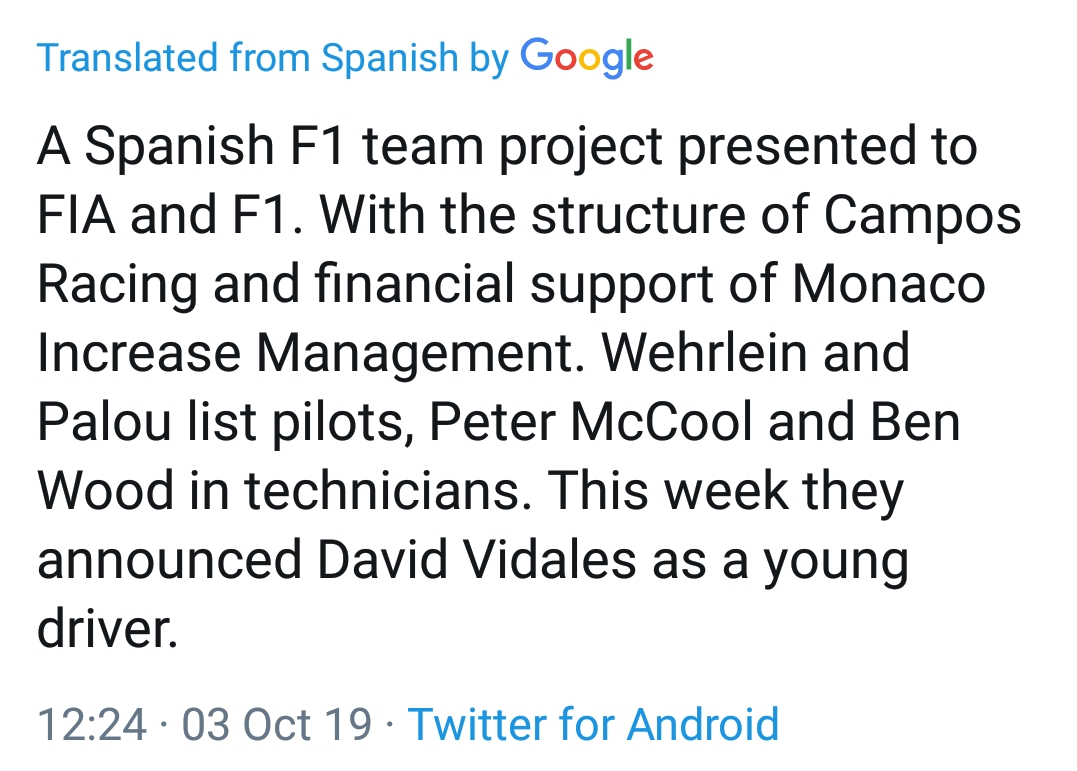 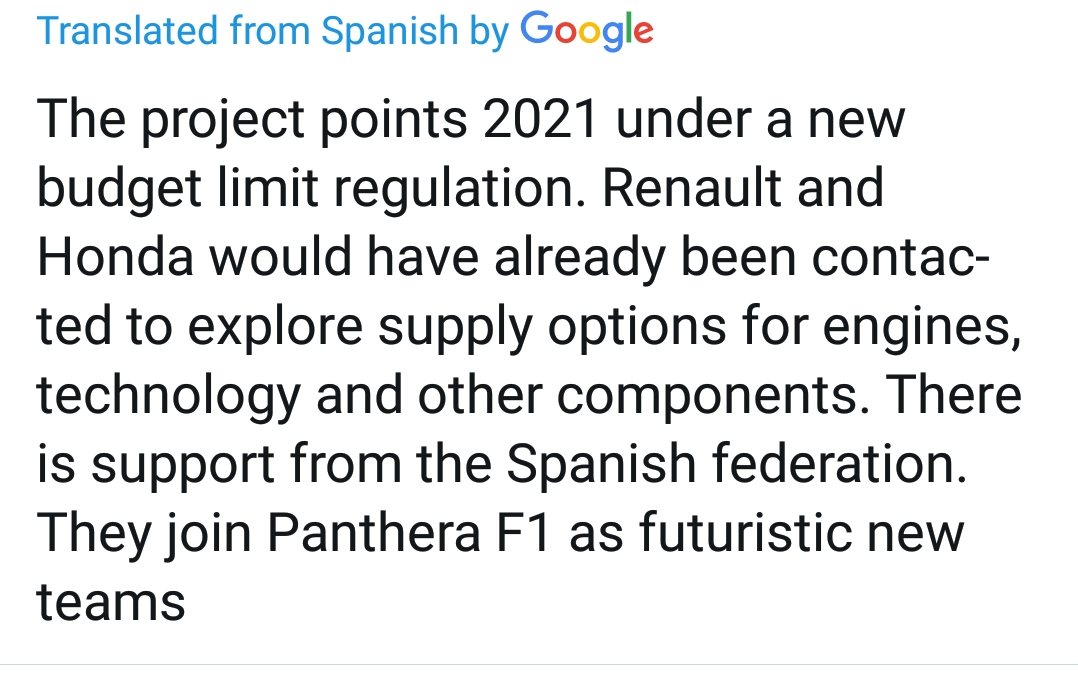 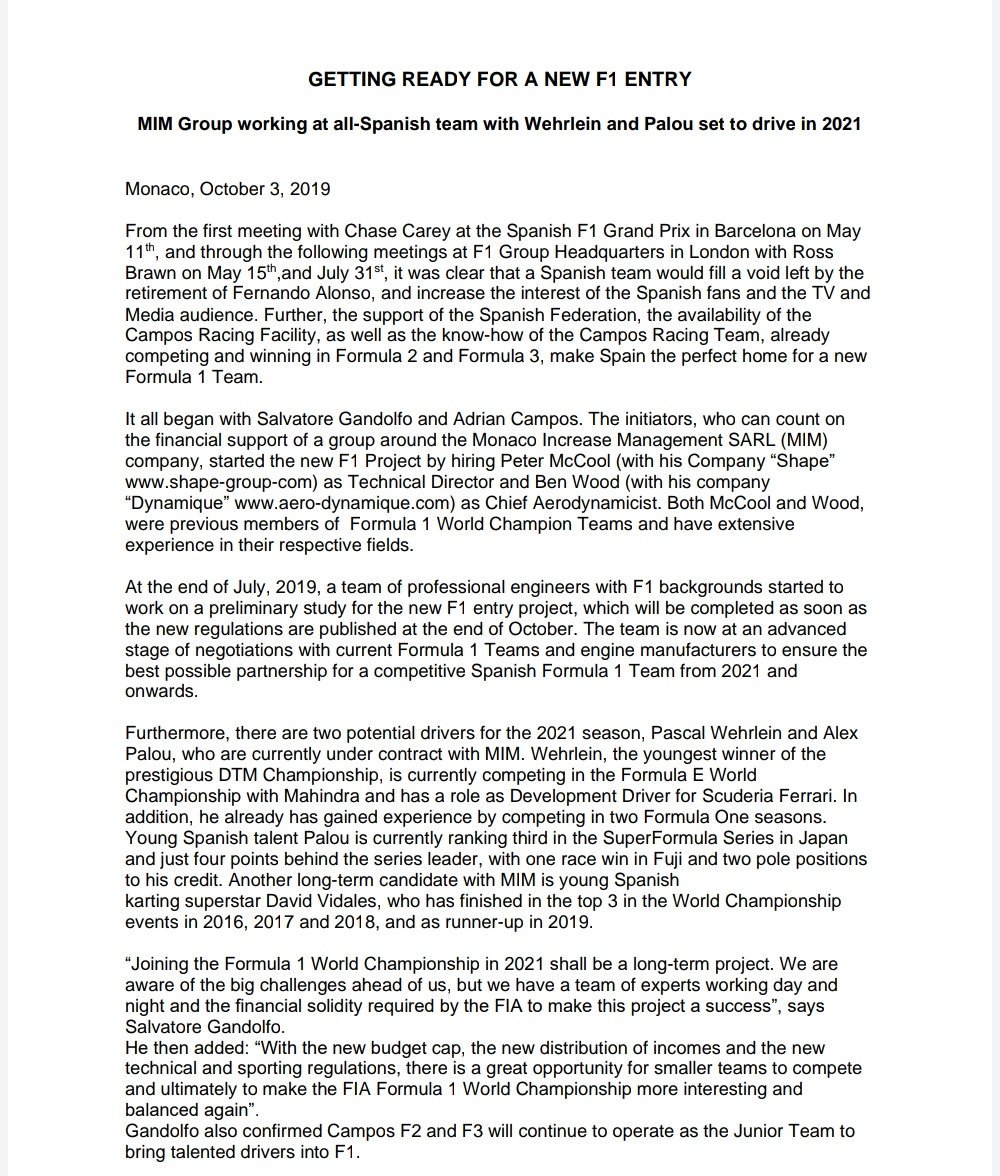 Well, we now have a rumored Russian team and a rumored Spanish team. We shall see.

we need many more teams, I'll keep my fingers crossed
I

I am not sure I agree with additional teams until they sort out some problems with overtaking, otherwise all what will be achieved is that Liberty gets richer, teams get lesser slice of the pie, and file of cars following each other gets longer. I am not convinced that is better, but rather the same or worse.

Contributor
There is a maximum of 26 grid slots. Unless they change that in the next Concorde (they (almost certainly) won't), we'll never have more than 26 cars. Incidentally, the cap on cars is due to safety concerns with allowing any more than that on track at any one time.

Actually there are three groups that claim they are putting together an F1 team in 2021 (Panthera Team Asia, Russian and Spanish), but Liberty is saying that there has yet to be any serious discussions. We shall see.

A few teams have announced their interest in F1. Instead of Liberty welcoming new interest in the sport and promising to work with any perspective new entrants and claiming it as a sign that F1 continues to grow, we get a curt response.

No serious talks have taken place.

Geee, its almost as if its a closed shop and they don't want any new teams.

Remember when any team who could build a rule compliant car (or buy one) was able to turn up and race?

Contributor
As FB has pointed out - Merc have very much announced their intention on leaving the sport on their new outlook on petrol engines. I think Liberty Media should be a bit more welcoming.

Premium Contributor
I wouldn't mind seeing F1 cars race on an oval once a year.

cider_and_toast said:
Remember when any team who could build a rule compliant car (or buy one) was able to turn up and race?
Click to expand

And that is the way it should be now !!!

vintly said:
I wouldn't mind seeing F1 cars race on an oval once a year.
Click to expand

would be interesting & from indycar the last 50/60laps of oval race are very exciting but when you think of fuss from 1 oval corner back in 2005. can you imagine 4 of them

i agree with Izumi on the thing that it would be 10 parts split into 13 & teams dont get enough as it is.

in a perfect world it would be fantastic to have prequalifying. but F1 cant afford having embarrassments like a Super Aguri, Lola, Life, Andrea Moda, HRT. where they are miles off 107%, cant afford to complete the season or both. doesnt look for brand. but F1 needs 3 more goodish teams on the grid. because its 6 more options & opportunities for drivers, engineers, designers, bosses even. too many times F1 to feeder series can be closed shop. who knows what Bird, Leimer, Valsecchi, LifeAndrea ModaDe Vries, Rosenquist, Evans or Frijns couldve done in F1 with 6 extra opportunities on the grid

Well, looks like 2 or 3 potential new teams are sniffing around for an engine:

F1Brits_90 said:
would be interesting & from indycar the last 50/60laps of oval race are very exciting but when you think of fuss from 1 oval corner back in 2005. can you imagine 4 of them
Click to expand

The fuss arised because Michelin supplied the wrong tyre and wanted the to have a chicane put in place to reduce the strain from the tyres.

Contributor
Not quite correct. Michelin supplied the wrong tyre but it was the teams who wanted the chicane to be put in so they could actually race in front of the fans. They even offered to sacrifice all points from the race just so they didn't all have to pull out and leave the sport looking silly with 6 cars going round the track. Alas that didn't happen as the needs of the few came before the needs of the many.

Well, looks like they are nailing the rules down. Both Liberty and Boris Johnson may have a deal in place by 31 October:

1. Reverse grid has been voted down -- I was uncertain whether this was a good idea.
2. Cutting Thursday and Friday from the weekend was voted down -- this is good. A GP weekend should be three days. They are shortening Friday so as to reduce the time the teams have to be there by a day. I still prefer the old Friday & Saturday qualifying format.
3. They do have 22 races for next year.
4. Toro Rosso is now Alpha Tauri. -- To tell you the truth, I have no idea why that must be voted on by the teams (and must be unanimous?). Is it really their business what another team calls itself and why do they have a say in that? This is some of the bizarre "control freak" behavior that bothers me about F1.

Anyhow, I gather talks continue. Four teams are on-board with the 2021 regulation package and I gather they still need to get the other six to sign on the dotted line.