How does a start up outfit get in to F1 and do well without being a car company or giant multi-national firm??

Valued Member
It can't, clearly. The tragedy is that FOM generates enough to guarantee every team sufficient funds to be present, say £40m. Sponsorship could be a bonus rather than a requirement.

cider_and_toast said:
How does a start up outfit get in to F1 and do well without being a car company or giant multi-national firm??
Click to expand

Clever engineering, which is harder and harder to do as the rules get more and more constricting.

Contributor
Not if you have Adrian Newey and his book of rule bending tricks.

Valued Member
But even with Adrian Newey on board, it took Red Bull several years and a major rule change, and no doubt significant chunks of cash from the parent company to do so.

Staff Member
Premium Contributor
Yeah, and where did Adrian Newey cut his teeth? Poor little under funded Leyton House March who thanks to his skills almost won the 1990 French GP and punched well above it's weight. Something that we don't apparently need anymore now that the our beloved motoring giants Mercedes, Honda, Ferrari and possibley Audi in the future, are saving F1 with their magnificent presence...

All hail the great car manufacturers, where would we be without them? 75 pound T-shirt to declare your love, anyone? anyone?
Last edited: 4 November 2014 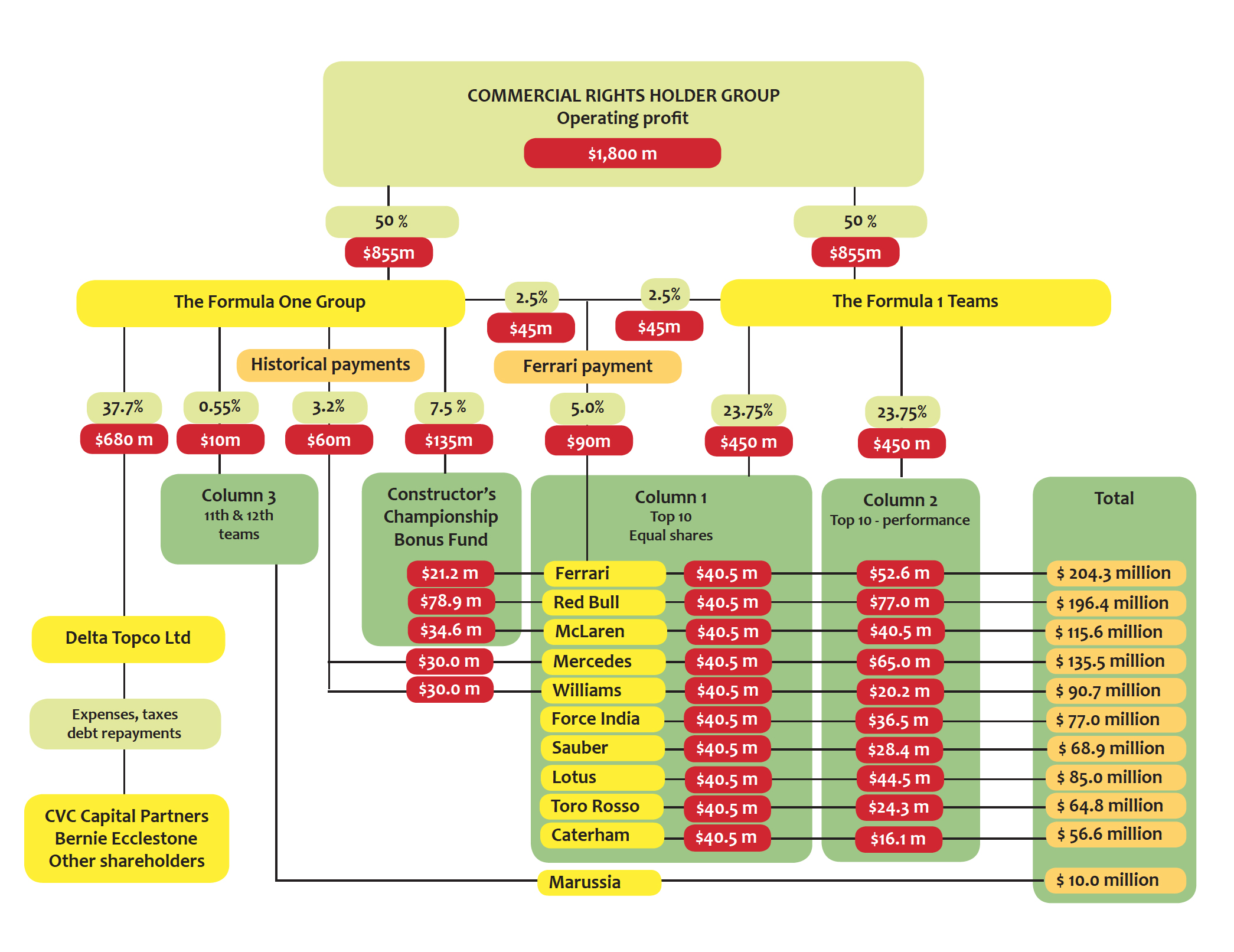 Staff Member
Premium Contributor
It's a bitter pill to swallow that 5 teams swallow up 225 million dollars just for being who they are.

Sauber must be absolutely gutted. They re-introduced Mercedes (through their Ilmor division) in 1993, have been in F1 for 21 consecutive years, achieving a highest finish of 2nd in the world championship and they don't get a penny extra where as Mercedes who, as a team have only raced in F1 for 7 years and until this year had (obviously because the constructors championship didn't exist pre-1958) a best placed finish of 2nd in the WCC, exactly the same as Sauber, get a bonus of 30 million.

The top ten payment was find where there were 30 or more cars and pre-qualifying existed, but in this day and age where only one team can fall outside of the top ten and therefore suffer massively it's not right. Any team who holds a franchise to race in F1 should get, as a minimum an equal share of that Column 1 award.

These private deals, especially where Ferrari actually get paid 45 million by their fellow competitors just for the privilege of racing them should be scrapped.

The beauty of that last one is that it would potentially reduce the number of rent a drivers as you would gain more money from having the best driver available to you rather than a poor driver who could only bring you a fixed amount. Also, there is so much talk about teams favoring one team mate over another etc, a team who may be tempted to do that currently would in the future have to think twice if they thought it would cost them x of million dollars.

So, back to the Mexican stand off it is then.

Contributor
For those of you who are interested in making a comparison with the Premier League: http://www.tsmplug.com/football/premier-league-prize-money/

I guess the main difference is that in addition to sponsorship the bigger teams also receive more income from ticket sales etc. as they have bigger stadiums.
Last edited: 7 November 2014

Contributor
So much easier when a chap got in a car and raced his nuts off.

I know I bang on about 'the old days' and I'm sure memory has tinted my glasses, but then I used to like Christmas as well until the money boys spotted an opportunity!

Contributor
Using my post above for the Premier league and rufus_mcdufus's post above, a table showing the difference in the distribution of money. I've paired together the premier league teams to get 10 pairs to compare to the top 10 F1 teams (it's obvious that any team outside the top 10 in F1 is just screwed over completely in F1 at the moment). The currency is millions of dollars:

The top couple of teams in F1 are getting close to $70 million more than they would be if the distribution was the same as the premier league, whereas the bottom three are getting around $30 million less.

EDIT: Updated to reflect new values on Joe Saward's article, rufus_mcdufus you may also want to update your post, although the changes are fairly minor.
Last edited: 7 November 2014

Contributor
That graphic clearly shows why Red Bull and Ferrari have been opposed to any measures that mean more equality down the order.

Valued Member
sushifiesta - Does that factor in the amount of money the Top 4 will get from going and playing their reserves in the Champions League?

Contributor
No it's just Premier League TV + prize money teabagyokel . There would be Europa league, FA cup, league cup etc. etc. etc. to add in as well I guess.

EDIT: I might be able to try something based on the 2012/13 season using this article later teabagyokel : http://www.theguardian.com/football/2014/may/01/premier-league-accounts-club-by-club-david-conn
Last edited: 7 November 2014

Valued Member
The Premier League is not a good model, frankly. The "live matches" nonsense is the equivalent of the "historical payments", which means Liverpool got more prize money for screwing it up.

It shouldn't be difficult to devise a system in any sporting competition whereby all teams got a reasonable basic amount, but each team got progressively more based on their position. Any other system stymies competition.

Well if ever a Sport was to shoot itself in the foot why not get Bernie to deliver the message, so the greedy bastards at the top table remain there until 2020.

Problem is from next year, when they look over to the smaller table, they'll see less and less teams there and fans who are already walking away in droves, disappearing even faster.

So the new solution is to live within your means like Bernie did in 1982. If you can't, leave the Sport, no begging bowls allowed.

Tricky part is finding the split, so far we have 4 major teams capable of supporting a junior team

What would need to happen is a merger between two of the midfield teams, probably Williams & Lotus as together they provide the strongest pairing. Force India & Sauber could link in with one of the existing main teams or with a new potential large name entering the sport.

An additional major manufacturer would need to enter the sport, either Audi or possibly even Ford or GM if the American market takes off.

Junior teams can work on the highly successful Red Bull model as well as keeping things simple as far as the constructors title as well, it would mean a 2 tier system but sometimes the smaller teams do throw up a surprise!

Contributor
Maybe, but Williams, Lotus, Force India and Sauber would just tell Bernie to piss off if he came to them with that plan.

And they 'd have my support if they did.