The day promised to be fine after a wet and windy Qualifying day. So the decision was easy, shorts not trousers. Getting to the track from Shanghai centre is easy. Metro line 11 goes all the way and there is a station at the track, and that was how we planned to get there. But it all became a whole lot easier, when Rob, a friend who was coming with us, said we might as well go in his car. His car comes chauffeur driven and is a comfortable Buick minivan. The driver was good and in around an hour we were at the track. And that's when we hit the first problem. Loads of police had the road into the track blocked, only taxis could go in. The chauffeur began to panic as he was waved away from the entrance.
"Hang on" , I said " what are these guys selling."
Swarms of shifty looking guys were waving things at cars.
"They might be car passes ," I said, but by this time the chauffeur was off to try another entrance. Next entrance, same, we were turned away. Whilst debating whether to get out and walk, go to the nearest metro stop, or find a taxi; touts again began waving things at the car.
"Let's just see if they are car park tickets" I said, so we stopped at the last tout to check it out. And they were car park tickets! £10.
The tout we stopped at was the shiftiest of all. He wore rumpled clothes, and was constantly looking over his shoulder; this would be to make a run from the police who kept coming from the entrance and making half hearted attempts to disperse the touts. We tried to beat him down to £5 and eventually settled for £6. During this process he twice made a run for the nearby bushes to avoid the police.
So armed with what we hoped was a car park pass, placed on the dashboard, we turned round and drove the 50 metres back to the entrance. The same policeman looking very important and blowing a whistle, who'd turned us away 2 minutes ago, and must have seen us go down the road, get a pass from a tout and turn around, now waved us through. Everyone was doing it. But this is China.
And so we arrived at the track. As luck would have it, this entrance led directly to the back of stand K, our stand, bingo! We left the driver, I was slightly concerned we'd never find him again, and we went to check out the seats. There was non of the hectic crowds and manic crush often experienced at GP's, and this despite a sell out of over 120,000. And yet there was a good atmosphere at the track. Lots of enthusiastic supporters for their favourite driver or team. I was delighted that right near our seats was a huge contingent of flag waving Chinese Hamilton supporters. They'd also adorned the railings with Hamilton flags. Perfect! Not so perfect for Rob, an Aussie and obviously a Ricciardo supporter.
Across the track was the Finnish contingent, very noisily in support of Kimi before the race even started. And further along in our stand, equally loud, were the Russians shouting on Kvyat.
We watched the support race, Porsches, and there were some very pretty ones! It was a really good race with lots of action at the hairpin which we could see easily. Most of the drivers were Asian, no Brits, so I just chose a pretty car to cheer on, one with pink wheels. It was doing well, about fourth but went wide at the hairpin on the last lap and lost a place.
Max and Rob were on the beer. Four large glasses between them.......then the beer place ran out of beer glasses( plastic ones). So the guys moved on to cans. Seventeen cans later and the beer place had run out of beer. I think the powers that be did their calculations based on what might be consumed by 120000 Chinese people. They didn't account for the influx of Brits, Aussies, Ruskies and Fins. After futile attempts to buy beer from other spectators who'd been more efficient at stockpiling, they had to eke out the last few cans.

Our view of the track was good. We could see the cars coming down the long straight, round the hairpin and back right in front of us. But first the drivers parade. We could see the truck coming and hear the cheers following it round long before it come in front of our grandstand. And when it did I arrive, I got my customary wave and thumb up from Lewis. He always finds me. You see this time I tweeted him in the morning and told him to look out for me in grandstand K, and so he did!!

After that we had a brief walk around before the nerves set in for the start.
Immediate cheering from our party as Ricciardo got in front of Rosberg and the two Ferrari's collided. Ferrari were definitely not making the most this weekend of the gift of Hamilton being at the back of the grid. And what of Hamilton? The screen in front of the stand was reasonable but we couldn't see everything and we had no commentary. Eventually we saw him come round with no front wing DAMN!! A SAUBER we assumed, since we saw one of those limping round as well. Things seemed to be going from bad to worse for Lewis. He pitted for a new nose but was now further back. Then approaching the hairpin we saw Ricciardo's tyre let go. ( How many Pirelli tyres does that make it this weekend? ) I don't think for one minute he'd have held off Rosberg's healthy Merc, but it was a cruel blow non the less. But a lap or so later, safety car!! Maybe a chance for Lewis after all. It took us a while to realise why he was in and out of the Pitts like a yo yo, but we did suss out eventually that he was getting rid of the supersofts to give himself strategy options.
As the racing resumed it was clear that Rosberg would win with ease, it was also clear that Hamilton was carrying damage. Despite him entertaining us with several overtakes including one on Raikkonen and one on Bottas at the hairpin, I think there were about 16 overtakes in all; he wasn't coming through the field in his normal manner. The car looked a handful especially under braking and as the tyres became more worn. This was confirmed after the race when Rosberg said his car was the best balance he'd ever had and Lewis said his was like driving a four poster bed. I guess if Lewis had to have a gear box penalty, an engine replacement and a damaged floor with loss of downforce, it was best to get them all out of the way in one race. Let's look on the bright side of things eh!
There was racing up and down the field. This was certainly not a snorefest!
Other things to note from actually being at the track are the sound of those Honda engines, 100% improvement there! They sounded diabolical last year, not so now.
The other thing, was the paint job on the Red Bull. You don't notice it on the tele but WOW! In the flesh it looks stunning, easily the best looking car out there.
So the race ended, time to head off. We wandered towards the car park wondering how we'd find the chauffeur and the car, when up he popped next to us! Bless him! He must have been waiting and watching. A comfy dozey ride back to Shanghai centre and we were having happy hour drinks in Hooters before 6p.m.
Great day out, great track! I can recommend it to anyone who finds them-self in the vicinity of Shanghai at the time of the GP. It's an easy stress free GP to attend and the views of the track very good. It's sad that I've heard talk it won't be extending the contact past 2017. What a waste.
This track as I've said reminds me of a dinosaur, but it's actually designed in the shape of the Chinese character 上 (Shang) and it means 'on'. Shanghai = on the sea.
I'll finish with a little something for Mr. Jeremy Corbyn. He has a passion for manhole covers. Jezza just loves his manholes. He's sure to enjoy this one, after all it's from China! 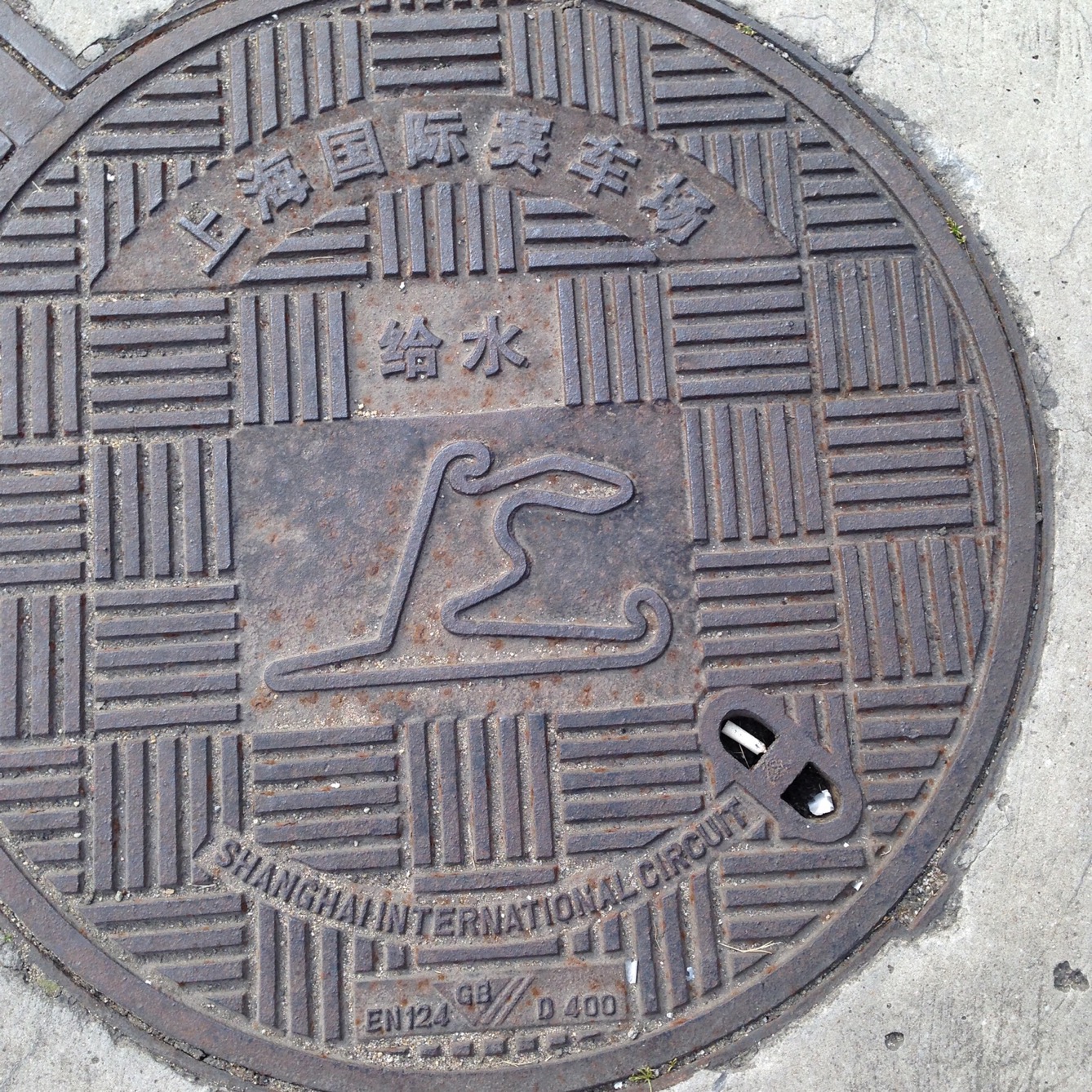 Contributor
Wow sounds like an amazing experience. I'm glad you had a great time. Thanks for sharing.

Valued Member
Nice write up racecub, sounds like you had a great time. Just one question, Hooters? Really?

Contributor
Great to read a first-hand account of such a far-flung race, nice one

Contributor
What a memory, you'll be dining out on the dodgy ticket tout for years.

Very nice racecub.......Glad that you had a good time, and especially that you received your customary wave, and thumb up from Lewis.......

FB said:
Nice write up racecub, sounds like you had a great time. Just one question, Hooters? Really?
Click to expand

Lol. I know. It was literally where the chauffeur dropped us, near Rob's apartment. And it was happy hour. We did move on to eat,