Staff Member
I'm surprised a certain someone hasn't already posted about this.... 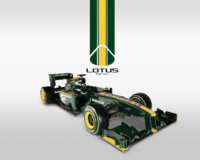 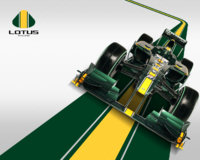 Staff Member
Premium Contributor
I have no idea what you're talking about.

Lotus, back in F1, I'd not heard anything about it. Well if it's true I would say I'm quite pleased....

(good to see they're following the old numbering convention as well)

(small complaint so far, Where's the badge? I can see the Proton Logo on the rear wing and the Proton badge on the nose but no ACCB badge?)

Valued Member
Now I've been as cynical as the next man about all this, but when you see the car looking fabulous like that...you can't help but smile can you?

GordonMurray said:
Now I've been as cynical as the next man about all this, but when you see the car looking fabulous like that...you can't help but smile can you?

Going soft in my old age...again...
Click to expand

I get loads of emails a day that claim to be able to help with that, you want me to send you some links over Gordon?

Staff Member
I have to agree, it is a bit of a looker.

Not having the wheel covers seems to add to the overall look too.

Staff Member
Premium Contributor
Let's just hope they've adopted one of Colin Chapman's theories of "if it looks good, it is good"

Contributor
No shark fin?! For that alone it looks like the best car but it's just great to see British Racing Green back!

Valued Member
Am I reading to much into the launch location when I suggest the new Proton Lotus might handle like a tractor? 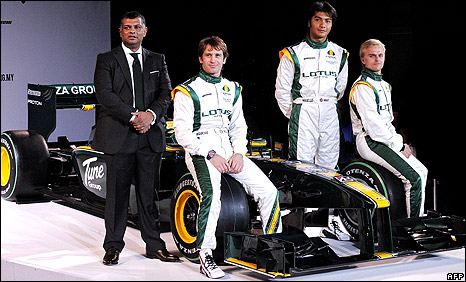 As for it being the return of Lotus, I will never refer to the team as such, since doing so is an affront to the great ACBC.

Staff Member
Premium Contributor
This is about as Lotus as we are ever going to see back in F1. Team Lotus pretty much died when Colin Chapman did and as I've said on here before ultimately it was that tragic early death that kept the name of Lotus being totally disgraced with Chapman being sent to prison in 1989. When the Chapman family sold their shares in Lotus in 1989 the team sank in to a back marking also ran maybe this new team will do the same or maybe they will refresh the Lotus name, that remains to be seen.

Ok so part of the reason the name is returning to F1 is marketing. Can't deny that and can't blame them for it. Sorry but I don't recall people pre-fixing the Le Mans winning Bently with the words Audi/Volkswagen and as I've jokingly posted in another thread, we don't call it FIAT/Ferrari do we.

As you may tell this issue is starting to really get on my nerves.

Mike Gascgoyne owns the rights to the Team Lotus name. Proton own Lotus and have leacesed some of the image rights to the new Team. Colin Chapman has approved of and backed the team. It has re-invigorated Lotus cars motorsport division so much so that for the first time since the Esprit GT in the mid 90s they are looking to re-enter the GT class with a possible season in ALMS and a return to Le Mans. Lotus Engineering is also providing some assistance to the team. For gods sake what more do you want? If the name was to return to F1 then as I said at the top of the article this is about as legitimate as its going to get.

Contributor
I just think that a new team should try to establish themselves with their own identity. If I bought the rights to the name British Racing Motors and produced a wheeled brick, I would be unfairly tarnishing the real team's memory. And, if I produced a world beater, I would imagine that I would prefer for the car to be remembered for its creators, not for some tenuous link to a glorious team from a previous F1 epoch.

Staff Member
Premium Contributor
In one respect I completely understand what you're saying. The image rights to BRM are currently being used to flog watches for example which is unusual.

With Lotus I feel it's slightly different. The car company and the team are linked and were linked from day one and part of this return is with the backing and aproval of the current owners of Group Lotus.

I can't see how the Brabham name could return for example, because the team is far to far gone to reserect. Where as Lotus has the continuity of the car company and a limited motorsport programme that has kept the team name going. (Not forgetting of course Classic Team Lotus).

Many teams have used other names. Ok not the best example but Ford entered F1 with their own motorsport programme and chose to call it Jaguar.

The final thing is obviously SF, you were lucky enought to see Lotus when they truely were great where as I was late to the game (mid-80's) so sadly I missed the glory years which reinforces your point.

Valued Member
CaT, I think you might be getting a little over sensitive to the Proton Lotus thing. One of the problems for me was that the Lotus name was almost an after thought, almost as if the guys that set up the team thought "how can we make the team more popular and get a big marketing kick? I know we'll call it Lotus".

It's good to have the name back but is it for the right reasons?

As to your other examples; I for one never thought of the Bentley Le Mans car as a Bentley as their racing heritage had died before I was born, it was another marketing exercise. I think we all know Ferrari wouldn't exist without Fiat but the aquisition of Ferrari by Fiat wasn't 10 years after the team had disappeared from the track and then bought back for marketing reasons (also Fiat was being bank rolled by the Italian government to hoover up and protect all Italian car makers)

I hope all Lotus fans are as pleased as you are that the team name is back on the track (it's a step up from the Pacific Team Lotus of the 90's) but, as you mentioned earlier, Team Lotus died with Colin Chapman.

No, But if you put Matra, Tyrell, BAR, Honda, Brawn, Mercedes I may think about it.

You are correct about my having seen Lotus in the glory days. They figured prominantly in the first 4 Formula 1 races I attended. 1966 Watkins Glen-Jimmy Clark's win in the Lotus 43 when the explosive BRM H16 in back held together for once.

1967-At Monza, I saw Jimmy at his best. He led from pole in the 49, but had to pit after 10 laps or so because he had a puncture. The stop took something like 90 seconds to two minutes! He came out a lap behind, and proceeded to carve through the others like a barracuda going through minnows. Starting the last lap, he was back in the lead (!!) but ran out of fuel and finshed third. You should have heard the ovation he received.(among the drivers he passed with impunity were: Surtees, Rindt,Brabham, Hulme, Graham Hill, Dan Gurney, Pedro Rodriguez, Jo Siffert, Chris Amon and Bruce McLaren-surely one of the strongest fields ever). Then at Watkins Glen, hed dominated so completely that he won with a suspension that collapsed with two laps remaining.

Add to that Mario's WDC in the 79 (had should have won in the 78 as well) and the exploits of Emmo and Peterson and Rindt, and I think you can understand why I hold the Lotus name in such esteem. I always thought that the team should have disbanded after Chapman's untimely death, because Chapman WAS Team Lotus, and it was clear that it could never be the same again.

There was always an umbilical link between Lotus cars and Team Lotus (in my mind at least) and it looks like this is being re-established.

Staff Member
Premium Contributor
I've just seen Heiki is getting his excuses in early. In an interview with a Finnish journo he's told him that the Lotus is worse than the Minardi he made his first F1 test in 6 years ago. That Minardi was some 5 seconds of the pace and so far the Lotus appears to be around 4 seconds of the pace. The Minardi was apparently down in every department but the Lotus is suffering mainly with the Chassis and Aero because the Engines and Tyres are now almost the same for each team (according to Heiki this is).

He's also said he feels like he is not fully prepared for the season and has never gone into a season with so little testing before.

So, Good work Heiki. The car hasn't turned a wheel in anger yet and you've just told the world it's Aero package needs a lot more work and at the moment, it's worse than a 6 year old Minardi.

If the car dosn't take the blame you've got the excuse that you didn't test enough.

For a man in last chance salloon he's not making a very good fist of getting the round in !!