An homage to my favourite driver. Fast, honest and one of the unluckiest Grand Prix drivers ever.

Jarier was born in 1946 and after competing in Formula France moved on to F3, finishing 3rd in the French Championship in 1970. 1971 saw him in F2 and debut in F1 in a rented March at Monza.

For 1973 Jarier raced in F1 for March and also in the F2 Championship. His exploits in F1 were pretty unremarkable that season and he was replaced at various points by pay drivers as the March team were struggling for cash. However, he took the F2 title with seven wins beating the likes of Jochen Mass,John Watson and Patrick Depailler.

For 1974 Jumper, a name he acquired at March as Robin Herd's son pronounced Jean-Pierre as "jumper", moved on the the Shadow team. Following the death of Peter Revson in testing in South Africa Jarier became team leader and managed a 3rd place in Monaco, his first points in F1. He followed this up with 5th in Sweden.

1975 should have been his break through year. He put the Shadow DN5 on pole in Argentina, only to break down on the warm up lap. He did the same in Brazil but then retired, whilst leading, due to problems with the fuel system. The season then petered out as and Jarier's only points came from a 4th place in the Spanish GP, which ended before half distance due to a huge accident which killed 5 spectators. Shadow even tried a Matra V12 engine in their car during 1975 but this proved to be just as unreliable as the Cosworth engine. 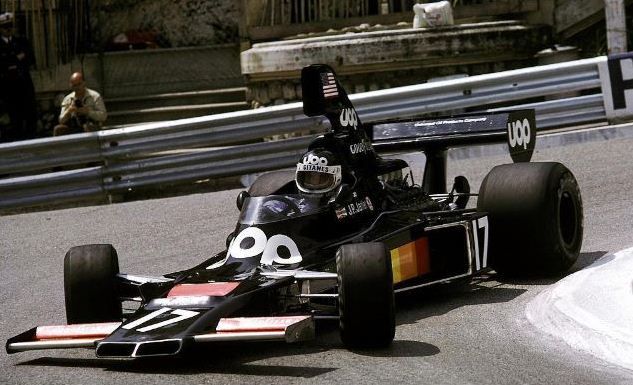 Jarier stayed with Shadow for 1976 but failed to score any points with a revised version of the 1975 car. For the next couple of years Jean-Pierre flitted from team to team, spending quite a few races in a very uncompetitive ATS managing only a single point at Long Beach in 1977 in a race where only 9 cars finished.

At the end of 1978, following the death of Ronnie Peterson Jarier found himself in the all conquering Lotus 79, a chance to prove his talent and speed in a competitive car, even in very sad circumstances. Jarier was running 3rd at Watkins Glen before running our of fuel and then in the season finale in Canada took pole and pummelled the opposition before retiring with an oil leak.

Having proven he still had the pace to compete at the top in F1 Jarier was signed to driver for Tyrrell in 1979, creating an all French partnership with Didier Pironi. Tyrrell were still slipping downwards from the peak of the Stewart era and the 009 was their first effort at a wing car. Unfortunately for the two Frenchmen it wasn't the most competitive car Tyrrell had produced but both drivers managed a couple of third places through the season and whilst Pironi decamped for Ligier in 1980 Jarier stuck with Tyrrell, now partnered by Derek Daly. As the 009 was pretty much a copy of the Lotus 79 so the Tyrrell 010 was a copy of the Williams FW07 and both cars were perfect for the previous season. Both Jarier and Daly managed to score 6 points during the season but the most famous moment for the Tyrrell cars was Daly cartwheeling down the track at the start at Monaco, ending up landing on Jarier's car and putting them both out of the race.

Jarier was without a drive for 1981 but deputised for the injured Jean-Pierre Jabouille at Ligier for the first two races of the season. Unfortunately when Jabouille finally realised that he was never going to be competitive in an F1 car Ligier offered the drive to Patrick Tambay. Jarier was back in F1 at the British Grand Prix for Osella and managed to haul the dreadful FA1B up to 8th in Britain and Austria.

For 1982 Jarier was equipped with the rather pretty Osella FA1C and scored Osella's first points with a 4th place at Imola, albeit because most of the FOCA teams stayed away due to a dispute with the FIA. Jarier was partnered in 1982 by Riccardo Paletti. Whilst Jarier managed to compensate for some of the shortcomings of the FA1C Paletti's lack of experience meant he didn't qualify for his first race until Canada, 8 races in to the season. It turned into a tragic even when Paletti, starting for the back, ran into the stalled pole sitting Ferrari of Didier Pironi. Paletti died in the accident due to a combination of the injuries caused during the crash and inhalation of smoke and extinguisher foam after the car caught fire when the fuel tank ruptured. 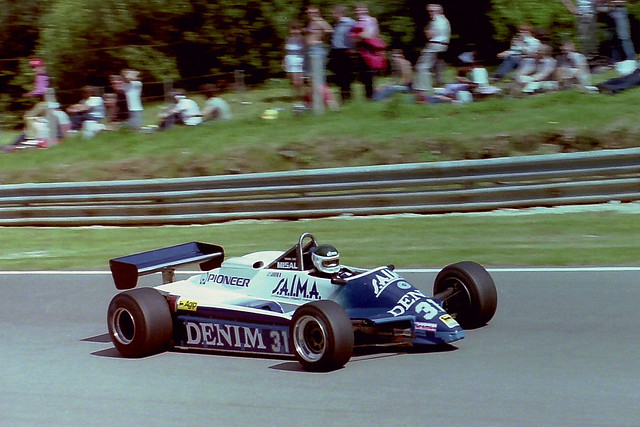 Osella only ran a single car for the rest of the season and Jarier and the team parted ways after the Las Vegas Grand Prix where he had a huge accident following a suspension failure. Enzo Osella tried to justify to Jarier that the car was safe by showing him lots of new suspension parts in the garage. By all accounts the question from Jean-Pierre was why none of these were fitted to the car.

1983 saw Jarier back at Ligier but the JS21 was not a competitive car and he gained a reputation as a mobile chicane, The worst incident was in Austria where he failed to let through race leader Patrick Tambay in the Ferrari who ended up 3rd behind Arnoux and Piquet due to Jarier's reluctance to let him past.

Although this was Jumper's last year in F1 he did drive in other categories, taking the French GT championship in 1998 and 1999. He was also the stunt driver on the film Ronin where, presumably, his love for breaking cars came in quite useful.

I wasn't old enough to watch Chris Amon drive so, for me, JPJ was the best F1 driver never to win a Grand Prix. In fact, for a man who contested 134 F1 races he never even got to stand on the second step of the podium. My enthusiasm for him as driver came from his columns in Grand Prix International magazine and reading race reports of the 1975 season in the John Player Year Book. Articulate, fast but with a lead foot prone to breaking cars. Jean-Pierre Jarier.

Contributor
Having seen both, I would rate Amon as the best with Jarier a close second.

I was crushed when he had the car break in the Canadian GP after a dominating drive. I also could never understand why Chapman decided to hire Reutemann rather than Jarier for the 1979 season. I believe that an Andretti/Jarier driver combination would have been extrememly formidable as they were both immensely talented and got along well together, whereas Reutemann never gelled with Mario at all. Plus Carlos was rather poor at car development with J-P being much better at it, which would have taken some of the load off Andretti and possibly helped make the 80 (which was ahead of it time) a race winner.

When drivers as talented as Amon and Jarier can go winless in their F1 careers, it shows just how capricious luck can be.

Staff Member
Premium Contributor
Interestingly, they have done a big bit on JP in this months Motorsport magazine.

Anyone have Mika Salo down as the most deserving driver never to have won a GP?

Valued Member
Statistically no (at least). The driver to lead most laps with out a win is Chris Amon who led 183 laps in total, putting him 60th on the list of laps led between Patrick Tambay and Jean Pierre Jabouille. Jarier comes in 85th, leading 79 laps. Mika Salo only ever led 2 laps in his whole career.

Staff Member
Premium Contributor
Yeah but what a pair of laps they were !!! Didn't he end up moving over to keep Eddie Irvine's championship hopes alive ??

Valued Member
Legs - Well, only if he'd have deserved Michael Schumacher's Ferrari seat in the first place. He only got the job because they couldn't be arsed to take Schumi's initials off their equipment.