Contributor
Hi everyone, here is the Tyre Analysis for the Inaugural Indian Grand Prix. By judging the fuel load and reference fast laps a we are able to create a benchmark time is. The seconds away from it is shown on the x axis. As tyres wear the benchmark becomes harder to achieve. We can see the tyre wear on the graph. A big thank you goes out to Sushifiesta and Jez101 who created the excellent spreadsheet (the link to it is at the bottom).

Pirelli chose to play safe at this new circuit and brought the Soft and the Hard tyre. Annoyingly Pirelli have made the Soft tyre the Prime unlike usual, so the drivers had extra Soft tyres. To avoid confusion I won’t call them by theirofficial names.

Most the drivers analysed here went for Used Soft, Used Soft, and New Hard. Both of the Mercedes Used a New set of Soft’s in their second stint. Hamilton used an extra set of Soft’s, put on the car whilst he got a new front wing. 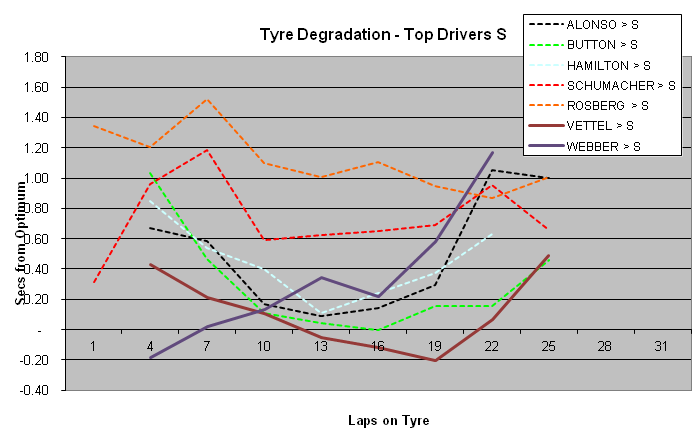 The Soft tyre lasted a massive amount of time, and not degrading too badly suggesting that this tyre really is very good, not far off the Bridgestone’s that ruined a fair few races in 2010. In fact most of the drivers didn’t appear to have any sort of issues after over 25 laps. Button and Vettel both pitted on the 28th lap of their respective stints, that’s not far off being able to one-stop! However both Red Bulls started to go off at the end of their stints. Afterwards in the press conference Vettel said how Button seemed to close coming up to the pit stop. This explains why, the Red Bulls were burning up their tyres faster than their rival teams.

Webber started to spin up his tyre a couple of laps earlier, and had been slowly losing them for most of the stint. Alonso also started to suffer some very steep tyre wear around lap 19. Compared to other teams of wear Alonso’s Ferrari was much more sudden. Hamilton also suffered some small wear whereas Button was less bothered by it. It was a solid performance from Mercedes, who got to use new tyres in their second stint. Interestingly the New tyres are wearing no differently to the used however (unseen on this graph) the fastest fuel adjusted times were 9 tenths faster for Schumacher and 2 tenths faster for Rosberg. The good all-round performance by the Soft tyre highlights the over-cautious nature of Pirelli’s decision. One other thing to bear in mind is that the new track was getting cleaner and more rubbered in all the time, hence some of the drivers tyres seem to get better before dropping off. 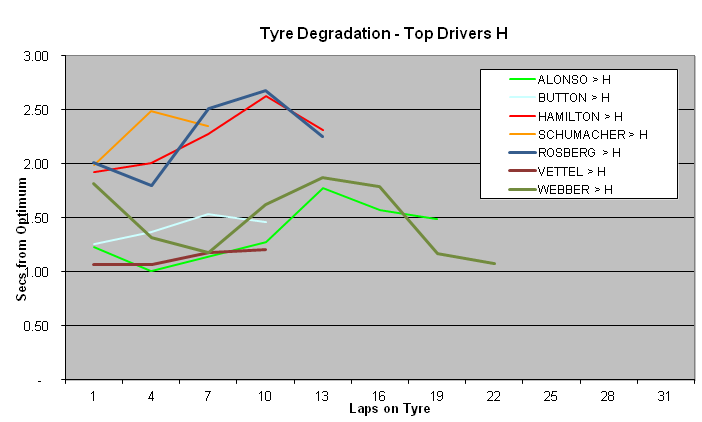 Moving on to the Hard tyre now, in its first appearance since Silverstone. Most the drivers stayed out for as long as possible on the Soft’s, pitting for New Hard’s with between 10 and 15 laps to go. However after Mark had finished off his Soft’s he was forced on to the Hard’s and Alonso had no choice but to react and pit earlier than he and Ferrari would have liked. The tyres hold on well, not showing any characteristic signs of wear for Webber or Alonso. Vettel, Button and Schumacher are all on the Hard tyre for a very short amount of time, as a result not much of a line is visible. Hamilton and Rosberg stay out slightly longer, but again there is no wear. They both dip in the middle, but there are many reasons that might happen, tyre wear isn’t one of them. I’m struggling to see anything more that can be learnt from this, so instead of dragging on, I’ll move to the next graph. 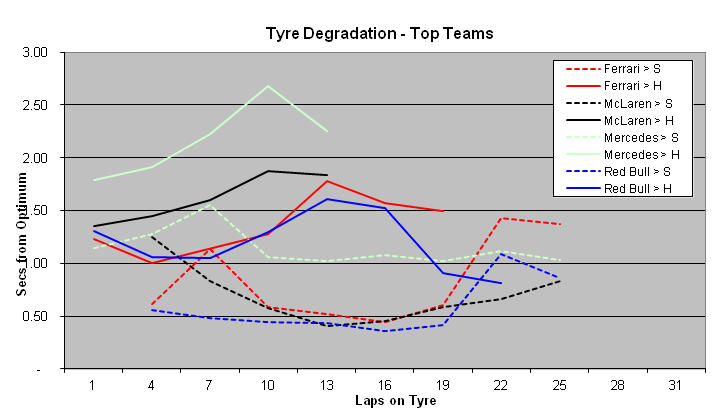 The teams tell us the same story as the drivers did. The Soft tyre’s last for 19 laps for Ferrari and Red Bull before losing grip. McLaren and Mercedes cope fine with the tyres up to and beyond that point. This is a good turn for Mercedes who have spent a large portion of their season immersed in tyre woes. The Hard tyre shows us nothing of much use. In 22 laps Red Bull (just Webber’s data from lap 13 onwards) are lower than they had been for the entire stint, the tyre obviously wasn’t wearing, and Ferrari show nothing eventful happening in 19 laps. I have run out of things to say about the Hard tyre now! 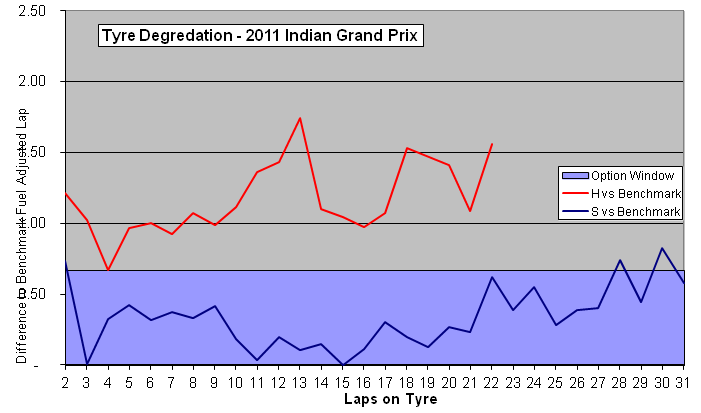 Lastly we can really see how the Soft tyre was the faster tyre, and it endured very well. Another thing to show Pirelli as they analyse how bad their decision was to bring the Soft and the Hard tyre. The Soft shows next to no signs of wear; it is definitely fading after 20 laps, but still is still the better tyre to be on. We could have seen some very interesting strategies were it not for the annoying 2 compound rule.

For the final two races Pirelli have been equally unimaginative by choosing the Soft and the Medium Tyre.

For the full spreadsheet look no further...
https://docs.google.com/leaf?id=0Bw...ZWNkMi00MzU2LWIxZDQtNmNmMzliZGUxMThh&hl=en_US

Contributor
I twould be really interesting to have a race with the super-soft and the hard tyres.

This is seriously impressive stuff and deserves a wider audience.

mjo said:
I twould be really interesting to have a race with the super-soft and the hard tyres.
Click to expand

Not sure mate. I think you might just get last lap pit stops? The difference would be at least 2s per lap and even the supersofts don't degrade enough to make up that difference. My feeling is that they need to reduce the number of tyres available for the race to two new sets of each. If they had that, plus the red and yellow tyres India would have been more exciting.

jez101 said:
Not sure mate. I think you might just get last lap pit stops? The difference would be at least 2s per lap and even the supersofts don't degtade enough to make up that difference. My feeling is that they need to reduce the number of tyres available for the race to two new sets of each. If they had that, plus the red and yellow tyres India would have been more exciting.
Click to expand

Fair point, but it would be interesting to see if the teams risk high degradation of the s-soft tyre or go on the hard tyre for better laptime, and how long they spend on it.

Contributor
Now that we have quite a few races worth of data, some clear trends have emerged. The most notable for me is that the yellow tyre is almost too good, especially in comparison with the white and silver tyres that we have seen.

The red tyre is certainly sufficiently interesting to continue with, but I hope Pirelli reconsider the harder two compounds in their range, which are simply slower and offer no durability over the yellow version. 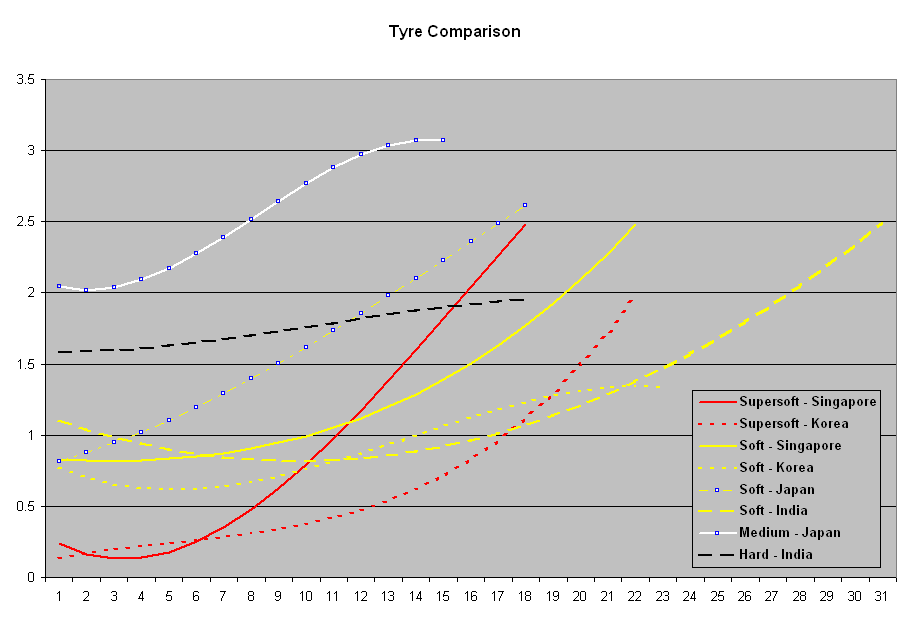 The chart above shows the trendlines that have come out of the tyre wear analysis for each of the last 4 races. By far the most interesting combinations we have seen in these four races were in Singapore and Korea where the red tyre started faster and then got slower than its yellow counterpart.

I know there is an argument that the red tyre would fall apart at a fast track like Suzuka, so I think a third compound is necessary. Maybe the silver tyre is suitable, or perhaps they should just do a slightly tougher version of the yellow tyre? I think that we are in danger of the races becoming very predictable again when the yellow is the option rubber otherwise.

Valued Member
And right on cue, Pirelli are going to try a new experimental soft tyre in Abu Dhabi:

Galahad said:
And right on cue, Pirelli are going to try a new experimental soft tyre in Abu Dhabi:

What's the betting, is the experimental yellow between the existing yellow and red, or as a new white?

Contributor
The new experimental soft was easily 1s maybe as much as 1.5s faster than the medium they also ran today in P1 & P2, Abu Dhabi. It is visually quite different from the existing soft, especially on board, with much higher shoulders than the old yellow tyre.

Unfortunately I didn't see any drivers using the existing soft tyre which is set for this race, so its hard to say whether the new one is faster or just the same.

Hemberey from Pirelli was on the red button commentarty, answering various questions. He said that they had the early versions of next years tyres for the young driver test after this race and that there are quite some changes. Their aim, he said was to bring the tyres closer together for next year.

Interestingly he also said that it's the teams that have done the most to increase the durability since the first few races this year. He said then teams were getting 12 laps out of a tyre they will now get 20 from them.