Valued Member
Stewart Grand Prix had been taken over by Jaguar. They'd lost momentum from their early season form, when Rubens Barrichello had mixed it with the front guys. Rain was in the air, as so often in Nurburg, and Frentzen lead off from pole, on a surprise title charge...

Felipe Massa sat on pole at Interlagos, the cheers of the fans ringing in his ears. Hamilton was ahead, but he was ahead last year too. For sure, if Felipe won the race, it would be his best chance...

The pit lane is no place for a Champion to start, especially if he's on for a fifth consecutive win. Up front Hamilton was ready for the sequence to conclude his career with McLaren. On second thoughts, leave them alone. They know what they're doing...

These are just snapshots from the best three seasons I can remember. And what do they have in common?

Epic title one-on-ones, but battles that didn't exclude outsiders like Frentzen, Kubica or Webber until late on.

Unfortunately, 2008 hadn't aged well. Singapore is a stain and never was a podium more undeserving than Piquet's at Hockenheim.

But the worst thing about all 3 seasons is that Zanardi failed to convert that 4th place on the grid at Monza. Preferably to a win!

Contributor
I too hold memories of '99 dear...

Frentzen in the lovely yellow Jordan racking up podium after podium...that brilliant win in France where Gascoyne brimmed the car on the spur of the moment, and not even a momentary box of neutrals coming out of the Adelaide hairpin could prevent Heinz-Harald nicking the win out from under Hakkinen's nose. The race was clouded not only with the weather, but with Damon's obvious disillusionment with F1, and the "will-he-won't-he?" chatter about his future. Super-sub Salo graciously handing over his only likely victory to Irvine at Hockenheim, only to struggle spectacularly at Budapest next time out. Mika's brainfart at Monza with HHF there to pick up the spoils again (for Jordan's first dry-weather win), planting him squarely in the title chase...and then the agony of him grinding to a halt exiting the pits while leading at the Nurburgring, in the race no-one wanted to win, to effectively rule him out again - I was genuinely gutted. It was my favourite season for years, until 2009 rocked up...

Thanks for making me think of this year again teabagyokel !

Contributor
Yes, 1999 is one of my favourites, even though I was very young, I seem to remember majority of the races from that season, the same can't be said from seasons 2000-2006, add to that, it is the first full season that I can remember. It had it all, if only Frentzen had won at the Nurburgring, it would have made a better.

Also, teabagyokel when was Webber in the title race for the 2012 season? I don't think he even finished third in the championship.

I would add 2003 to the list, the last of Schumacher title's and probably the most difficult one to win, with the likes of Raikkonen, Alonso and Montoya knocking on Shumi's doors.One of the most iconic images for me is Alonso overtaking Schumacher in Hungary as a symbolic coming of age for the then young driver.

Contributor
2003 would have been great, had Ferrari not browbeaten the FIA into hobbling Michelin by changing the tyre measurement rules halfway through the season. Possibly one of the most egregious abuses of sporting regs ever- even Ross Brawn looked uncomfortable trying to justify it. Cap that with the ludicrous penalty dished out to Montoya at Indy that effectively put him out of the hunt (his fault Rubens turned into him, really?), and 2003 felt manipulated in the end. Leaves a bad taste in my memory, frankly.

downforce, you're absolutely right, I don't know what I was thinking !

2010 was pretty exciting from a WDC point of view - 6 different championship leaders, the only time there has ever been a four-way championship decider (how much would THAT put pressure on double points?!). Vettel really was 5th after Italy, Massa really did lead after Malaysia, and who'd have thought that Petrov would play such a pivotal role? 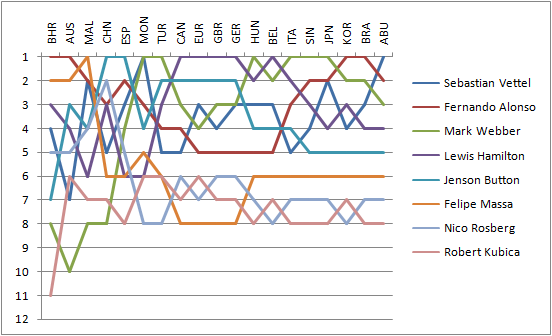