Valued Member
As you all know, eras aren't all that well defined in F1 history. I will probably be criticised for starting and ending eras with particular drivers when its not necessarily the case that will be the case - in this case Fangio and Clark. All I can say is I have to put an arbitrary line in somewhere, and I feel the era from 1958 to Lotus' assumption of sponsorship is the true era of the "garagiste". 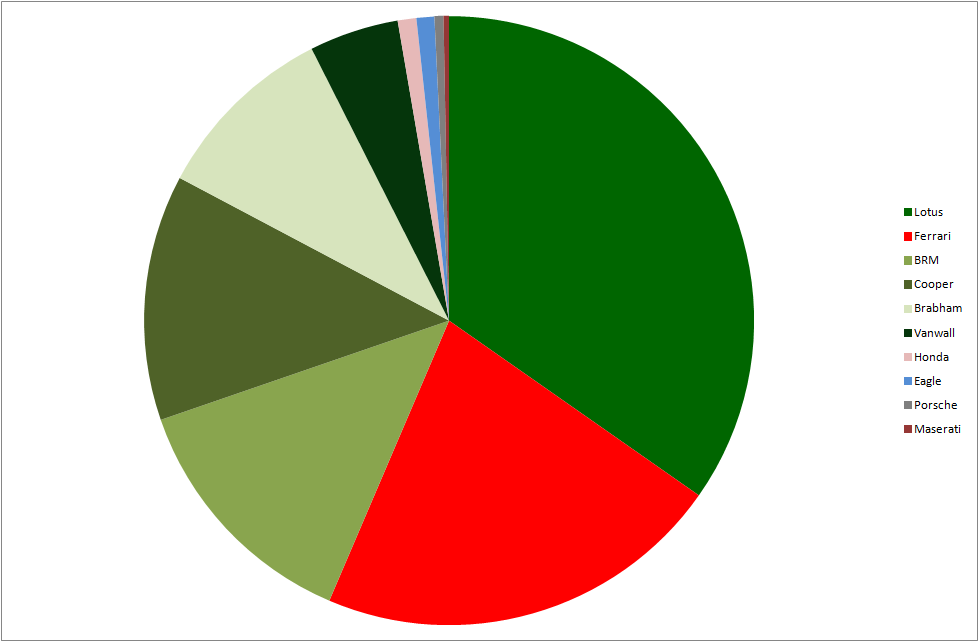 This suggests that the decade was dominated by Lotus and Ferrari, but that was not necessarily true. They only won the new Constructors Championship twice each in this time period:
GRAPH: Performance of Ferrari & Lotus in WCC 1958-67 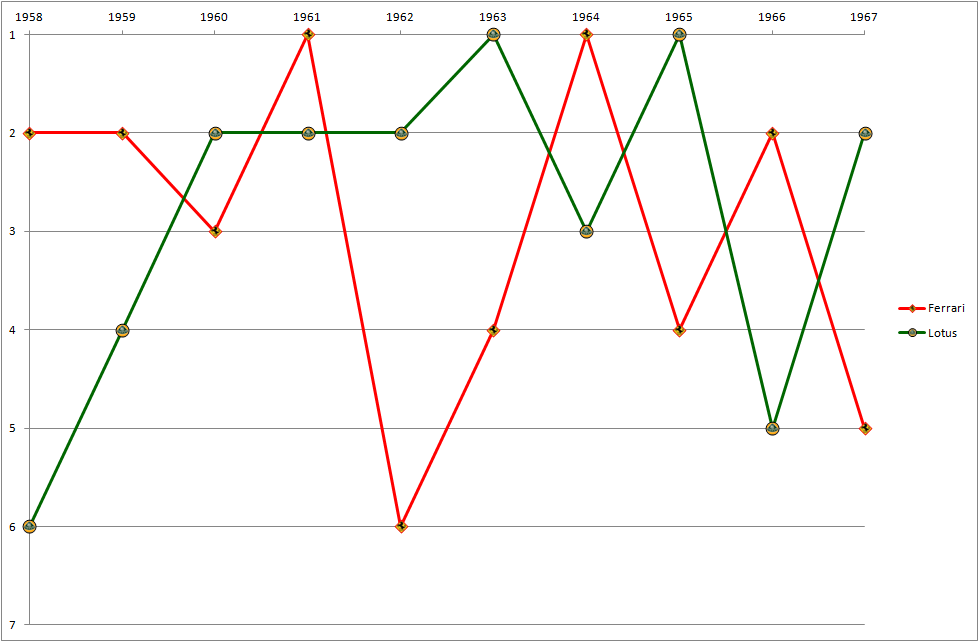 Ferrari were dominant in 1961 and fought off the British constructors in 1964, while they won a Drivers' Title in 1958, but by and large there was a fall off of their performance from the previous era.
So, who were the drivers who made the era:
GRAPH: Driver Wins 1958-67 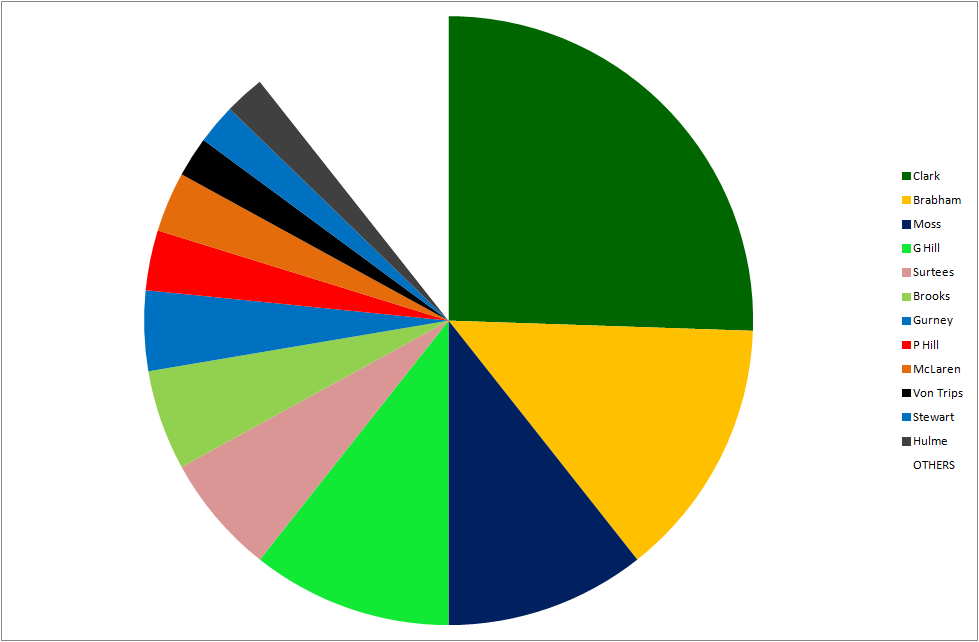 The Latin drivers of the Fangio-led days had gone to be replaced by Anglo-Saxons. Wolfgang Von Trips was the only non-English (native) speaker to win more than one race in this time period! The Brits themselves were obviously very successful, winning more than half the races four years in a row and the lot in 1963:
GRAPH: % of wins by Brits 1958-67 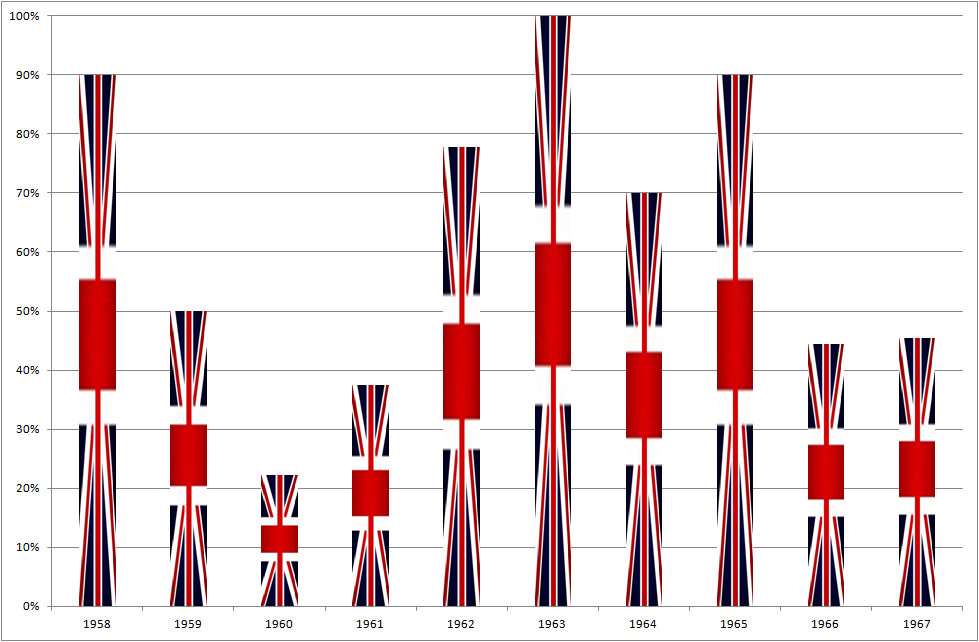 The daddy of them all was of course Jim Clark, who won about a third of his F1 races, and was not classified in another third.
GRAPH: Jim Clark's career stats (inc. 1968 South African GP) 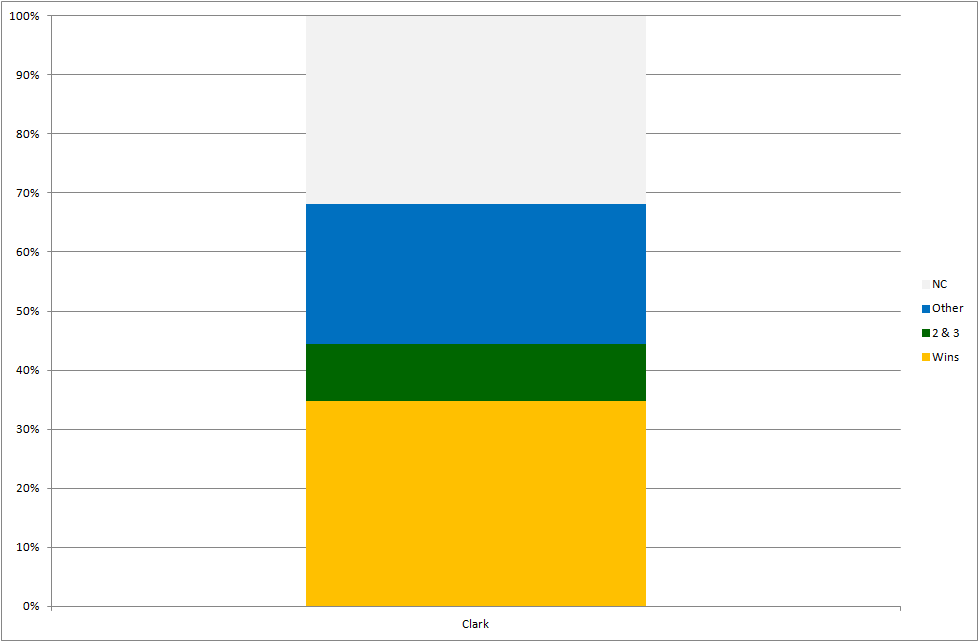 The blue section of the graph includes other retirements which plagued him as Lotus built a notoriously fast but fragile car.
So, all in all, an era where the previous manufacturer powerhouses of Alfa, Mercedes and even Maserati were replaced by teams from the south of England - first Cooper, then BRM, but most impressively Lotus. And the Antipodean connection was successful too, with Brabham winning the title twice and the second most successful team in F1 history, McLaren, formed and ready for its initial gains in 1968.
And an era where the English-speaking world was dominant enough to win all but 8 Grands Prix, and all of the titles. The top drivers would come from further afield again soon, but the Constructors' battle between the M4 corridor and Maranello would become F1's default state.

Contributor
This was a truly fascinating era. The transition from front to mid/rear engine configuration got underway. Competitive customer engines were available (Coventry Climax) which helped bring about the creation of new teams. The Brabham team won in 1966 and 1967 with a production-based engine (The Repco was a modified General Motors engine). Maserati created a brick of an engine with their V12, and so did BRM with their H16. Lots of diversity in engines.

Clark was clearly the best driver of the time (and IMHO the best ever), but the WDCs of that time included Brabham, Hulme (usually vastly under-rated IMO), Surtees, Phil Hill (also grossly under-rated) and Graham Hill. To me, the fields of that era were amongst the strongest ever, and privateers could actually be competitive (witness Rob Walker's team running Stirling Moss).

Contributor
Between Italy 1966 and 1967, Honda, Weslake, Maserati, Cosworth, Ferrari , BRM and Repco all won races. The same period two years later all the races were won by Ford.

Valued Member
The distance led by Lotus is striking, but it took them two seasons to make their cars reliable (at best).

There were two changes of engine regs in the period, in 1961 which conveniently fell completely into Ferrari's hands, and in 1967 that allowed Brabham to take the title while the opposition sorted themselves out.

G, I don't normally question you knowledge but didn't the 3 Litre Reg change come in at the start of the 66 season not the 67? I only remembered this because that was the year that Clark won with the god awful (but nice idea) BRM H-16 engine in the Lotus 43 while in 67 the DFV made its debut in the back of the type 49.

Contributor
An interesting footnote (at least to me) is that, during this very time frame, Dan Gurney (another under-rated driver and the only one Clark ever said he feared) scored maiden victories for 3 different marques--Porsche, Brabham and his own Eagle team. The only other driver I know of that accomplished the same feat is Sir Jackie Stewart--Matra, March and Tyrrell.

I still believe that Dan would have won a WDC if Porsche hadn't left F1 due to costs. This was also an era where Le Mans cars were rated equal to or higher than F1. Ferrari were far more interested in winning the Sportcar championship and Le Mans than they were with F1.

siffert_fan said:
An interesting footnote (at least to me) is that, during this very time frame, Dan Gurney (another under-rated driver and the only one Clark ever said he feared) scored maiden victories for 3 different marques--Porsche, Brabham and his own Eagle team.
Click to expand

You can also include Stirling Moss, for Vanwall(Shared win), Lotus (Rob Walker), and Cooper.

Contributor
Thanks, tooncheese. I was unaware of Sir Stirling. Pretty illustrious company Dan is keeping, isn't it?

Valued Member
Gurney unique in that he only won 4 races, though. Wrong place, wrong time for Gurney normally.
M

Contributor
Is this a new thread? if not where are my posts if so why is it not a continuation of the the first thread? I am thoroughly confused now.

Contributor
Thanks Brogan I thought the history would be amalgamated into a single thread...

teabagyokel said:
Gurney unique in that he only won 4 races, though. Wrong place, wrong time for Gurney normally.
Click to expand


Yes, a driver of that era could have done quite well stepping into the seat that Gurney just vacated. He left both Ferrari and Brabham just as they were about to become dominant. Timing is everything, and Dan's wasn't very good in Formula 1.

In other series, he did better. Back then, drivers competed in numerous series, including Le Mans, Can Am, Indy, sedan racing and even NASCAR. Dan won in all of them!