Current stats between the two

Once part of Ferrari's academy programme but dropped out when Mclaren suddenly offered him the chance to replace Hamilton which he took. He immediately slumped to scoring zero points for 6 races in 2012 and made the wrong noises initially at Mclaren in 2013 bashing into at least one world champion in his first 5 races. The car was not a race winner and he got constantly outperformed by Button as the season wore on and was dropped suddenly by Mclaren after simulation tests showed he was slower than Kevin Magnussen who replaced him.

Having rebuilt his reputation at Force India as a more steady driver who can pick up points and podiums and outscoring the highly rated Hulkenberg. He has gone back to his earlier incarnation of being more robust and aggressive racer and bashing into his teammate often.

He harbours ambitions of deserving a top seat - having rejected the Renault deal last year and hoping to get a shot at the Ferrari seat for 2018 citing lack of leadership at Enstone but a great driver ought to be able to lead his team through difficulties and get them focused together right? So he did not want the challenge so it seems

Very highly rated in the paddock and has plenty of years ahead of him to be France's next world champion although LeClerc might have say in the matter.

Such is his potential Mercedes refused to let him race for Renault who previously have been supporting his career to show how much they want him as their man. Having joined Manor in the 2nd half of the season and performed well enough to be given the nod over his Mercedes junior teammate and rival Wehrlein, Esteban's career is definitely on the up all he needs is a podium to get him to the next level

He has had chances to score podiums this year but it seems somehow it is his teammate who has denied that chance not a rival or another driver.

Having accused of not being assertive enough at Montreal when on fresher tyres with the team .. it seems like he has adopted a much more bolder aggressive racing from then on when he sees his teammate which seems to always end in tears for the team


Now there is a suggestion that if they don't behave they will be face a race ban from the team which would give Alfonso Celis Jr an opportunity possibly... I wonder if the team had to ban either driver at the Mexican GP would they dare do so to Perez seeing he is the face of all the promotions relating to the event or keep their sponsors happy and ban Ocon so they get two Mexican drivers for that race

The question is will they be teammates next year... it seems like Ocon after showing a bit more anger has calmed down knowing full well getting angry with his teammate is not going to help land a future Mercedes drive

Contributor
Best championship finish 7th in 6 seasons? He'll ever be the "also ran"
Better than Kvyatt but still fairly shite.

I wrote a bit about these two in the 'rate the race at Spa' thread. So apologies if I duplicate. Just saw this thread.

I've always liked Perez as a driver. I don't think he had a fair crack with Button as a team mate ( not getting into that though, just my view). He out performed the highly rated Hulk. Hulk was never a favourite of mine but is clearly talented and is doing great things with the Renault. But his partner is Palmer.......

So back to Perez. He was my choice to partner Lewis at Merc. I was wrong. Bottas was the better choice. Perez is a selfish driver and not a team player. I think he takes beating his partner as THE most important thing whatever the circumstances. He's rattled by Ocon and has been the cause of many lost points for Force India. I still rate him as a driver but I suspect his attitude has put the top teams off him.

Ocon is getting on a par with Perez. Sometimes faster. He's young, new and has lots of promise. He has shown he can fight but not to the destructive extent of Perez.

Two fast drivers. But Perez is out of hand. I imagine any interested teams would always give the nod to Ocon over Perez. Mercedes, Ferrari or Red Bull ? ....can't see any interest in Perez by them. But Ocon. He's one for the future.

And until this season I had Perez up as third favourite driver after Lewis and Max. Not any more.

Contributor
As a self-proclaimed Ocon fanboy I think we all know where my views are going to land. Looking at it from a bystander angle though it seems like a classic case of establish well thought of driver being rattled by up and coming talent. It's almost Alonso/Hamilton 2007 like. Perez knows Ocon is going to best him eventually and is doing everything he can to hold him back. Don't get me wrong I love a driver with some fight in him but there are limits.

By the way during his junior career Ocon very much had a rep for leading from the front and getting consistent results but was often thought to have a slight lack in bravery when it came to wheel to wheel racing. I think Spa might have dispelled that!

I'm just going to leave this here: which was worse...

Contributor
Given the flying front wing that could very easily have hit Marshalls or gone into the crowd I'm going to say Perez on Ocon.

I'm not sure about that. I remember being outraged at the danger Schumacher but Barrichello under. He knew Barrichelo was there.
Perez was pretty bad but I'd say Schumacher worse.

The Artist..... Why is that footage relevant, they didn't even touch. Ocon and Perez made contact on lap 1 and again later on.

By the way, in Germany they think Ocon was the naughty one which I think is a bit strange.

Rutherford- oh, I don't know, crowding a driver into a concrete wall at 180mph; the incidents aren't at all similar... oh wait....

Schumacher got a 10 place grid penalty for that, and Warwick (the driver steward) said he was lucky not to have been black flagged....

This is what it looks like when drivers touch at the same speed @1:35:

RasputinLives maybe considering the tension between the two nations over the past couple of hundred years and the power struggle within the EU these days.
Yes, Ocon could have pulled out of the second move, but Perez also shouldn't close the gap like that on his teammate.

Bugger. I wish you hadn't brought this up again. I always thought the criticism was a little unfair on Schumacher, as Rubens followed him to the right while still behind and just kept going (see pic). I think Schumacher thought he'd back off and go left. I suppose the extra dangers in the Schumacher / Barrichello incident were the pit exit ( this could be an issue at Monza if Perez and Ocon are near each other again), and the grass run off - which could have launched the car. Did you see the F2 incident between Markelov and Rowland in Hungary? 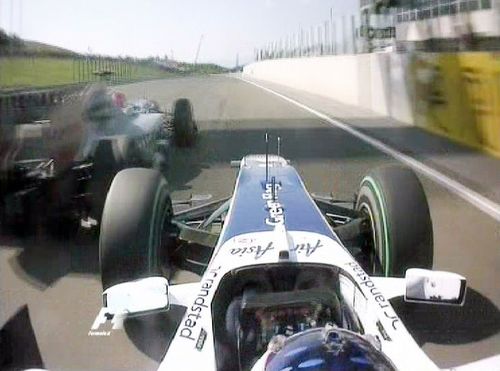 This is the Markelov/ Rowland incident (if it doesn't get blocked).

I hadn't seen that, but the Force India shenanigans reminded me of Fittipaldi/Martini at Monza

Valued Member
Back to the subject:

Perez: Journey man with lots of pesos so expect him to slowly work his way down the grid in the coming years
Ocon: Seems very talented and will be the next Merc driver when they either dump Bottas or Hammy retires

Couldn't help it. Perez was a moron, should have been penalised. Schumacher shouldn't have been, and Rowland wasn't.

Valued Member
Not a happy boy then

They should get on with it. Spectators complain that the sport is too stale and now the team wants to enforce team orders that's not beneficial.

Contributor
It's not but when you are a team like Force India on such a small budget you can understand why they expect the drivers to take what's best for the team into consideration with their actions on track.

It is a problem of their own making though. This all started in Canada. If the had just been strict with Perez then there Wouldn't be the animosity there is now and both drivers would have more respect for the other.