I was just watching the Qualifying buildup for Singapore 2009 and found this piece with Damon Hill pretty interesting. This was soon after the Renault crash-gate revelations where some were questioning the legitimacy of the sport.

Contributor
I felt a twinge of sadness today when Damon was interviewing Jos Verstappen as the proud father seeing his son win a grand Prix for the first time. Sad because Damon never had the opportunity to see his own father look that proud after his first win.

Maybe a bit random but I felt sad all the same.

this was just before my time in F1 but im confused at why he thought arrows/footwork was solid bet when Stewart was a risk. because look at the calendar. that team scored 1 point in 1996 in a race where only 8 drivers finished on the lead lap

surely i wouldve thought considering your going to be at the back of the grid anyway. take the risk you got nothing to lose. like in 2016 having an offer from Haas but going for sauber or manor. but then that 1997 move always confused me. he had offers from McLaren Ferrari Stewart but he went to arrows 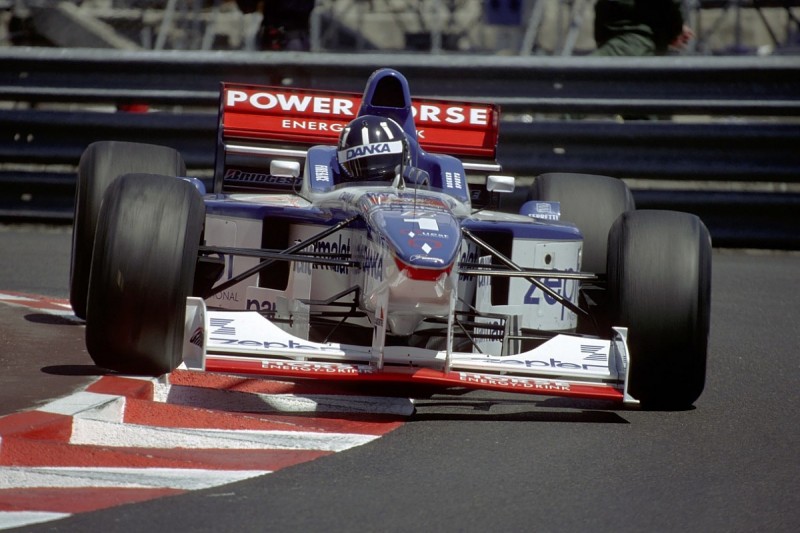 Damon Hill says that it 'broke my heart' to turn down racing for Jackie Stewart's Formula 1 team for the 1997 season, but felt the move was too risky

"He made me a very good offer. I've got to say, it broke my heart to turn Jackie down, because I knew it would have been like a dream thing.
Click to expand

"I just thought career-wise, it would have been a big risk. They'd never run a F1 team before. I think Jackie would let me off that one.
Click to expand

"To jump out of a winning team into a team that has never raced before was a little bit too much of a leap of faith for me - not that I ever doubted that Jackie and Paul would pull it off."
Click to expand

The Arrow was reasonably quick but unreliable, the Stewart unknown, the first could be fixed the Steward in its first year a no hope. It turned out neither was a good choice

Staff Member
Valued Member
Damon wasn't left with too many options anyway. While I understand he had something of a right to play hard ball with contracts as the reigning world champion, I think he priced himself out of the market with a lot of teams.

I love Hill to bits and really admire the job he did at Williams but let's be honest, a number of drivers in that era would have produced the same results.

Arrows had a works engine deal with Yamaha. Tom Wilkinshaw was running the team after having over seen Schumacher's 1994 title and had a relatively successful year with Ligier. Finally, Arrows moved into a brand new, purpose built factory at the end of 1996.

It was the best of a poor list of options and someone more willing to pay the wedge Damon thought he deserved.

The biggest knock on effect from Damon being dumped by Williams in favour of Heinz Harold Frentzen was Adrian Newey leaving for McLaren after disagreeing with Sir Frank's decision.

Interestingly, at the same time as Damon entered into negotiations with anyone who'd listen, Eddie Jordan was courting Nigel Mansell to replace Martin Brundle for 1997.

Jordan, who went for Fisichella in the end, signed Hill for 1998.