Alexander Albon makes his debut in F1 in 2019 with Toro Rosso having started our as a Red Bull junior and then being dropped before being welcomed back at the end of last season. Marko has not been very complimentary about Albon in the past so his recall is very much a U-turn on the management front.

Albon races under a Thai licence and is a practicing Buddhist but is actually half British as he was born in London and grew up in Ipswich. His junior career is pretty good without being outstanding. Why? Well mainly because he has followed Charles LeClerc up the ladder. To his credit Albon has always pushes LeClerc to perform better and personally I think he is well deserving of his spot in F1. He might have pushed LeClerc a bit more in F2 in 2017 but for a broken collar bone sustained whilst mountain biking. He seemed to be fully recovered for 2018 though and in one of the strongest F2 fields in years he more than held his own and ended up second in the championship. Originally signed to drive for Nissan in Formula E he was pryed away by the offer of the Torro Rosso drive.

Albon has always been a demon on one lap pace and is more than adept at mixing it up in the pack so hopefully he'll be a good asset to F1. He is now very much in bed with the Red Bull programme and, with the exception of Carlos Sainz, those drivers don't find seats in F1 outside of the Red Bull teams. Lucky for him Red Bull have just promotes Pierre Gasly who everyone is still unsure about and might very well sink opening the top seat up to Alex. The only draw back to this is an unpredicatable team mate in Kvyat and the Ticktum/Schumacher threat on his shoulder. Personally I rate Albon higher than Gasly but we'll see how it plays out.

Another thing to note is a conversation on here between F1Brits_90 and Galahad. F1Brits_90 was talking about Leclerc being the first driver from Monaco to score points in F1 in 50 years and how it would be a streak that would be we be broken. Galahad off handedly remarked that the only way it could be beat was if a Thai driver scored points. I doubt either knew Albon was on the horizon but hell it seems prophetic to me!

Well the British press will try and see he is a Brit if he does well no doubt. Off the three to come up from F2, you might say he could be in the best car of 3 given how things are at with Rusell and Williams and the less ambitious projections of Mclaren for Norris

gasly going to be a heikki. i have no doubt. because ive said before gasly only got that job on lack of options, 2 good races Bahrain & hungary outside of that he was average

although ive mentioned before this is 1 of biggest (deserved) out of the blue drive in a long while because we cant forget it was only 10 months ago that he didn't really have a budget & had 1 race deal. after performing so well DAMS decided to give talent a chance over money, he went on an unlikely title challenge & he cant possibly have thought that in 7 months he would have an F1 drive. but delighted for him that the planets have alligned & talented nice guy gets a shot. i hope the guy have give a good account of himself. also if im correct in unlikely event of a podium he will be using the thai flag

DAMS confirms Latifi for 2018, Albon for Bahrain only

heres a really odd fact for you that ive come across his dad nigel Albon took part in 15 of 21 races in 1994 BTCC season racing regularly with tiff needell
Last edited: 18 February 2019


I doubt that record will ever be beaten, when a nation got points in 2nd race & then had to wait until 980th
Click to expand

Galahad said:
Thailand is probably a candidate for the future. Birabongse Bhanudej - Wikipedia


Also I thought Olivier Beretta must have scored a point, but apparently not. Best finish of 8th back when they weren't throwing points around like confetti. So I learned something new today.
Click to expand

F1Brits_90 said:
you make a good point on that, but I would also add alexander albon. doing very well in F2. although to beat the record he would have to be after 2019 Mexican gp
Click to expand 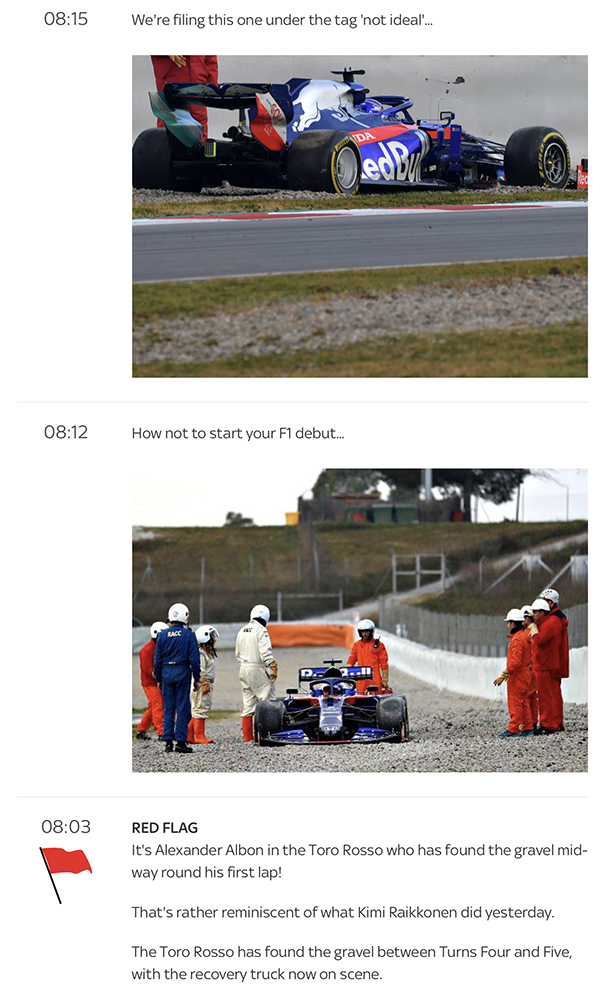 Alex Albon will get there. I am sure he will be in the running for the best rookie.

Contributor
So Alex Albon has gone from being unable to get on the grid in F1 and signing for Formula E in November to bring in a race winning car come August.

Il_leone said:
It would amaze me if he outqualifies Verstappen in his 1st race
Click to expand

if he can beat mclaren comfortably & finish on same lap. they'll be pleased

F1Brits_90 said:
gasly going to be a heikki. i have no doubt. because ive said before gasly only got that job on lack of options, 2 good races Bahrain & hungary outside of that he was average
Click to expand

i was hoping he was going to prove me wrong

F1Brits_90 said:
if he can beat mclaren comfortably & finish on same lap. they'll be pleased
Click to expand

Granted the bar isn't too high....but it was for Gasly.

Contributor
I think your anger is misplaced. Sainz chose to move to McLaren because his buddy Alonso told him too. He'd signed the deal before Ricciardo signed his for Renault so they wouldn't have known the would need to promote him.

That is partly down to Red Bull dithering whether they wanted to promote him or not . Supposedly they were worried about internal war because it got too much for the guys at Toro Rosso handling two feisty young drivers and massage Max's ego

yes really was wrong place wrong time, as it ridiculous now to think that 4 years at toro rosso because with Verstappen & Riccardio Red Bull was full, but now new drivers are barely getting a year at the team

Contributor
Il_leone no it's not. There was nothing to promote him too. They have Verstappen and Ricciardo in place for what they thought was the long term. That's the whole reason they loaned him to Renault and the whole reason Sainz did his early deal with McLaren.

I guess lets see how Max reacts if Alexander beats him and Helmut's reaction as well . Strangely he too was dropped from Red Bull programme a while back

Maybe there is still hope for Dan Ticktum in the future

As the past has proven Christian Halliwell does talk out of his a$$ a lot
Last edited: 13 August 2019