Ruslan said:
Il_leone and Izumi....does one of you guys want to get an avatar? You almost look like twins!
Click to expand...

Did not notice Ruslan last time I tried they said my file size was too big . Will come up with one then

Are you saying that Hamilton doesn't insist on being the number 1 in the team? If he doesn't, why did Merc bring on Bottas, a mid-mid-tier driver rather than an upper-mid-tier one like Rosberg? And why did they extend Botta's contract, except for the fact that he made a good doormat for Hamilton?
Click to expand...

Off he course he wants to be No1 but he backs it up on the track as well. Mercedes bought in Bottas because Rosberg retired unexpectedly after feeling he could not go to that level again to beat Hamilton. They could have picked Wehrlein but the issue was he did not do enough to justify promotion and every team has said he had a serious attitude problem and don't want to work with him. Why have not they picked Ocon ? Hamilton said he did not mind who it was so the decision is down to Toto and the Merc management. Whether they feel that his one season out means he needs his race craft to improve and worried he might suffer the Gasly effect so send him to a midfield team to improve before being promoted . Or simply not as highly rated - I am surprised they did not make the statement Ocon is their man as Mercedes do bring their young drivers through

The situation they have created is leaving all cards on the table for next year which means drivers like Vettel, Verstappen and Ricciardo all who contracts also become available
--------------------

Going back to Hamilton vs Vettel , Hamilton's Cv looks far more impressive now than it did back in 2013 when he was stuck on 1 title and Vettel had bagged 4 in no time . However you say Hamiton has been winning in only the best car .. I think you will find that Ferrari for the last two years have had a car sometimes faster than Mercedes and failed to capitalise .

Vettel's situation at Ferrari has been coming for years if he does not deliver then serious questions will be asked of him and rightly so being paid $40m a year and wanting undisputed No 1 status. He did not want Verstappen or Ricciardo as his teammate so he suggested Giovinazzi and Le Clerc at one press conference.
Last edited: Sep 10, 2019

Il_leone said:
I think you will find that Ferrari for the last two years have had a car sometimes faster than Mercedes and failed to capitalise .
Click to expand...

that claim is not backed up by any evidence, on the contrary if you look at what Mercedes' #2 driver has achieved over the last couple of season compared to what Ferrari's #2 drivers have achieved (I am considering Leclerc as their #2 driver only because so far he is behind in the standings, obviously he's not their #2 driver) the hard evidence points to the fact that Mercedes had a car that was significantly faster than Ferrari notwithstanding the fact that both Kimi and Leclerc are signifcantly better drivers than Bottas (I almost believe that comparing Bottas to Leclerc or Kimi would be insulting them).

Ferrari's car has been significantly worse than the Merc this season, last Sunday Leclerc won with an inferior car only because he drove so well and because his car was fast on the straights but under braking and into the corners the Mercs were much faster. The same is true for Canada, Vettel kept in the lead despite an inferior car. Without the negative effects of the turbolence that these cars create Hamilton would have won (easily) both in Canada as well as last Sunday

Il_leone said:
Did not notice Ruslan last time I tried they said my file size was too big . Will come up with one then
Click to expand...

Well....it is really disconcerting as Izumi likes all things German and Japanese (except for Hamilton in a Mercedes)....and you don't seem to be a really big Vettel supporter.
I

Ruslan said:
Well....it is really disconcerting as Izumi likes all things German and Japanese (except for Hamilton in a Mercedes)....and you don't seem to be a really big Vettel supporter.
Click to expand...

Steiner - Not for the likes of you. 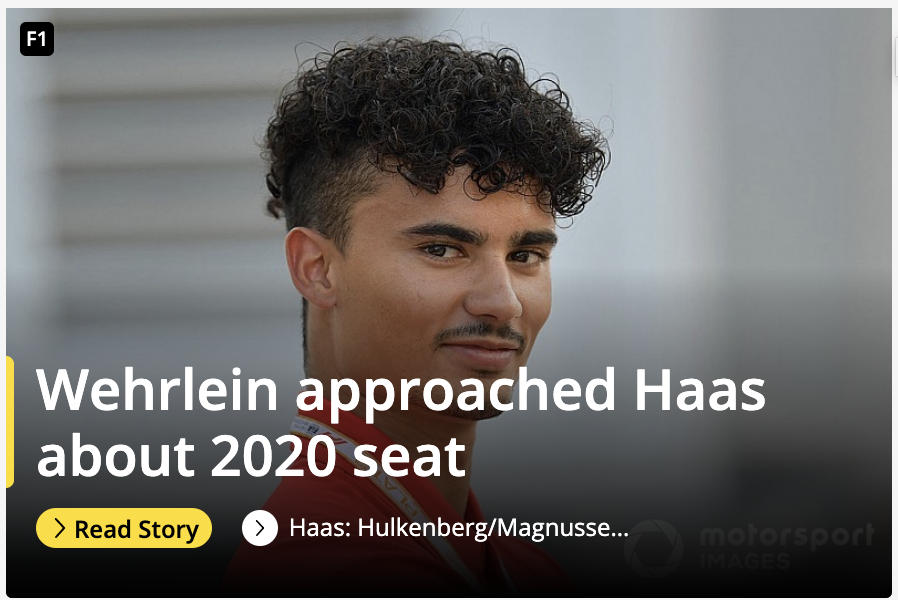 Gunther should have considered carefully Wehrlein as he's a much better driver than both Magnussen as well as Grosjean
Last edited: Sep 13, 2019

Contributor
IMO he really is not.

my memories of wehrlein was he hardly set the world alight v rio harytanto. i think it he only beat harytanto 6 - 5 in qualifying til he was ditched in Belgium

Contributor
Ocon didn't exactly blow him away in 2016 though did he? and he's on the sidelines still smelling of Roses and climbing back in the car next year.

I am not for one moment suggesting he should be given another drive, however. In fact i don't really remember much else about his time in F1 at all.

Wehrlein said he is arrogant and it looks Force India, Manor and Williams all agree because none of those teams would offer him a full time drive ( well Manor had to)

So that is probably why Haas may have reservations about him. I don't think he is better than Magnussen or Grosjean, his career was been molly coddled by Mercedes ... the senior drivers were shepherding him to the DTM title before he got into F1.

The Haas Formula 1 team will field an unchanged driver line-up in 2020, having opted to retain Romain Grosjean alongside Kevin Magnussen.

Contributor
Hulk must have signed a Formula E deal then. Teechetah?

would be a fantastic signing for them & him. i say this with greatest of respect but wouldnt be missed in formula 1, because F1 never appreciated him & if he went to Formula E I can see him being a title contender straight away
You must log in or register to reply here.
Share:
Facebook Twitter Reddit Pinterest Tumblr WhatsApp Email Link
Top Bottom