STV player on in the back ground to listen to the commentary at work.
Interesting to see how well Ireland play against Scotland on Sunday morning. That is a tough starter for the Scots. Ireland ranked no. 1
Then the England game right after it, should be an easy win for them against Tonga.

Anyone else watching the Rugby world cup?

Greenlantern101 said:
....Then the England game right after it, should be an easy win for them against Tonga.
Click to expand

Good one to lose then.

I can only remember one World Cup where England looked like getting anywhere.

ill be watching I always enjoy internatuoal rugby, world cup or lions. I think England were mighty unlucky in 2015 should've seen the games out 25 mins to go they were 10pts clear & could've got a draw, which would've seen them into the knockout stages v south Africa. then the group was ridiculous it was the biggest group of death ive seen In most sporting world cups, when you think fiji are your 4th best side, it was tough C & D were very easy

but Its tough to try & figure how England could do because there are some tough games upcoming as if they win Group C could be likely wales QF & NZ SF, if they come 2nd could be likely Australia QF & Ireland / SA in SF both are 50/50. im going to be boring & say I fancy new Zealand for a 3rd straight title, will get easier QF with Japan / Scotland. but wouldn't surprise me if we got a New Zealand v Ireland final though

Fully anticipate a laboured performance from England with us making more of this group than necessary followed by an exit in the quarter finals. I don't think Eddie Jones has transformed England Rugby in the way people expected and, although he's had issues with injuries, he seems to use a tombola to select his England squads.

Ireland may have peeked too soon and have had an underwhelming 6 nations and pre tournament warm up.

Though the All Black's are always pre world cup favourites it's difficult to see where their challenge will come from.

Contributor
It's going to be great.

haven't ITV been the only broadcasters since 1987, but this is good because all major sport needs to be on terrestrial tv, because for publicity reason & as I always say that's how you get the next generation through

F1Brits_90 said:
on cider_and_toast thinking through the history of the rugby world cup haven't new Zealand been the favourites for every world cup bar 2003
Click to expand

Also, New Zealand have never lost in the group stage.

The last time New Zealand lost any world cup fixture at all was against France in 2007.

Given the early nature of the kick offs, you can be plastered by breakfast time! 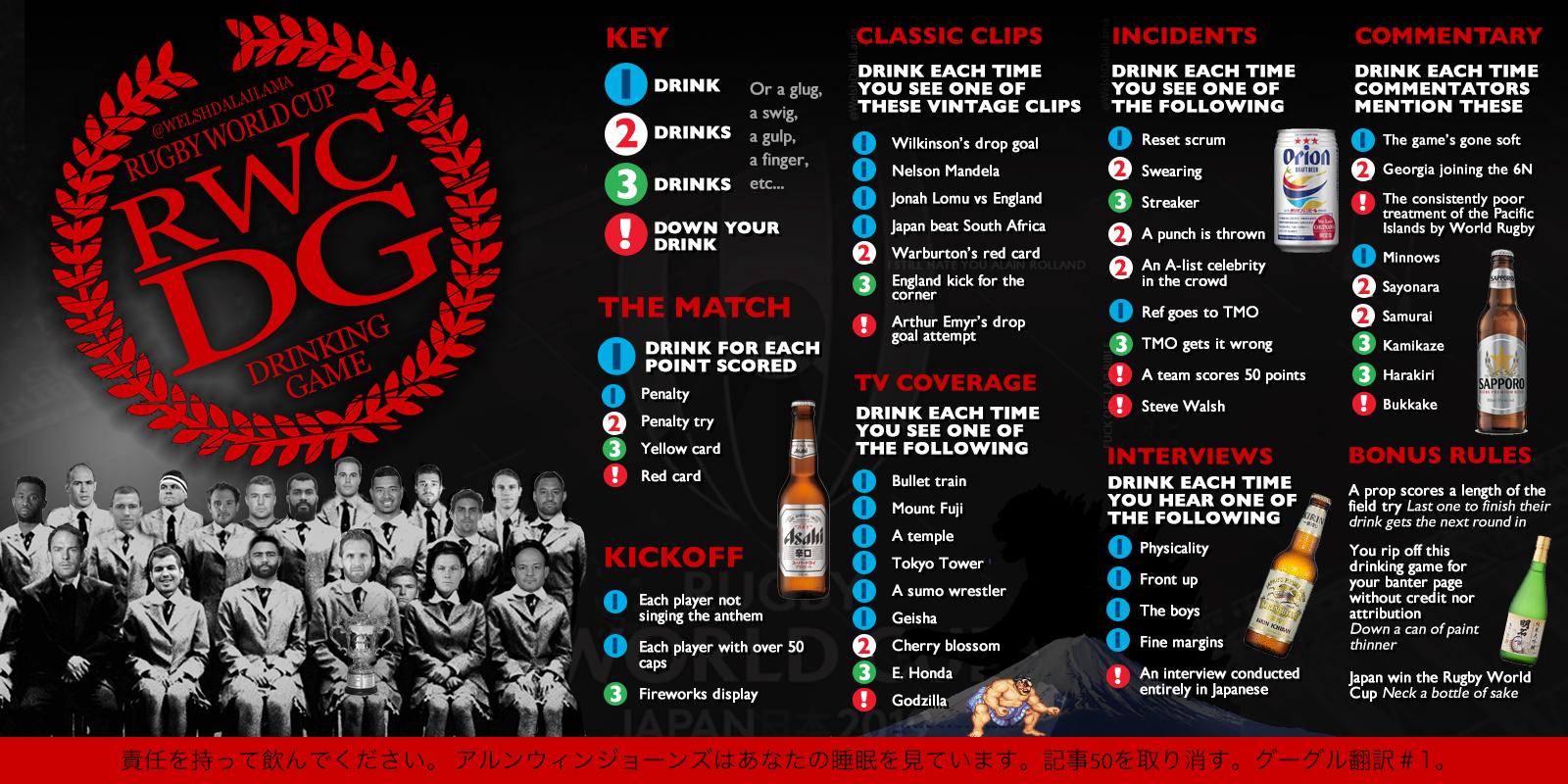 Contributor
Ironic that the 1st red card of the tournament was for a shoulder charge to Owen Farrell.

Contributor
Japan beating Ireland has really made it all to play for in Group A .All of a sudden Ireland could be up against the All blacks in the Quarterfinals.

And Japan were a pleasure to watch...
I was cheering them on; just a phenomenal attitude... There defence was epic.

yeah that really has thrown cat amongst the pigeons, my main thought is that what does that say about Scotland who were battered within a half by Ireland. Ireland even with 2 bonus point wins would finish 1pt behind. which is going to be tricky as you want to avoid the all blacks. but someones got to stop them

Huge Victory for wales that really throws the cat amongst pigeons, because working it out probable Knockout stages. we could have a situation where all the top 4 seeds are all in top half & if a top seed is going to win the world cup they are going to have to do it, in probally 1 toughest routes ever seen. as England or Ireland are in where they could have to beat the 3 biggest southern hemisphere teams in a row

Contributor
The nerves are a bit shot after Wales’s win against Australia. Nice for a change for us in a World Cup to have our destiny in our own hands.

Given the early nature of the kick offs, you can be plastered by breakfast time!

This is pretty much what you have to do every match...