Onward to Suzuka and the Japanese GP. Yakult anyone? Let’s hope that it’s more entertaining than the Russian GP, which excelled at only one thing, being dull.
Suzuka is built as the central attraction of Motopia a motoring and engineering theme park. Which really sums up F1 in 2019.
Michael Schumacher had six wins at Suzuka, and Lewis Hamilton has had five so far, will he win here and match Schumacher or will Ferrari get their act together and get another one / two. After Singapore I would have put money on Ferrari taking the win, in fact I think I did, but after Sochi I think that Hamilton will draw level with Schumacher. Although we mustn’t overlook Verstappen, this is a Honda track, it was built for them as a test track, and Verstappen is in a Honda powered Red Bull. Honda and the Japanese fans would love a home win, add those two facts together and Verstappen and his car might sprout wings.
Suzuka, from the drivers viewpoint, is quite a complex track, with its figure of eight configuration and cool crossover, slow hairpin bends, the uphill Esses a series of curves which if driven badly will lose the driver a bucket load of time, and then some flat out sections like 130 R. Plenty of scope for drivers to get it wrong, and cars and their engines to take a hammering. How do you set up a car for a track like this one. Red Bull of course had new engines at Sochi, Honda giving themselves the best possible chance to do well in Suzuka. The teams at the back end of the grid can be expected to struggle and a few to fall by the wayside. Although the days of just 9 or 10 cars getting to the end of a race seem to have gone.

The weather in Japan is Autumnal and there have been a few really wet races here, well certainly wet Qualifying sessions, with the occasional Sunday Qualifying followed by the race, there was even a Typhoon on race weekend back in 2004. All of which makes a tricky track, even trickier, but it also mixes up the grid quite nicely.
Anyway hopefully this track will deliver an interesting and entertaining race or at the very least a rain storm.
Enjoy.

Interesting Facts.
Honda have only ever won twice here
Kimi Räikkönen won this race from 17th position in 2005
Typhoons are common in this location
Lewis now has 322 points
Bottas has 249
Leclerc has 215
Last edited: 29 September 2019
Click to expand

That's what's known as an ambiguous guilty, nothing illegal but

Contributor
They didn't break a rule as such, more stretched it to the point where once another team complained, Racing Point in this case, the FIA had to slap their wrist and say don't do it again.

i wonder if they have been disqualified under 27.1 "The driver must drive the car alone and unaided" if they have concrete proof that brake bias is changing on its own without input from the driver. then it would considered a driver aid i assume

Contributor
I believe you are right F1Brits_90 that is the rule they were penalised then.

Damn that was almost a very awkward typo, good job I spotted that one, it started peni..... I'm saying no more

Angel said:
I believe you are right F1Brits_90 that is the rule they were penalised then.

Damn that was almost a very awkward typo, good job I spotted that one, it started peni..... I'm saying no more

i dont understand either racing point are from silverstone not penistone

fascinating why interested in the progression of the car since start of hybrid era & vettel pole was 5.2 seconds quicker that rosbergs 2014 pole he would've only just made 107% by 0.5 second 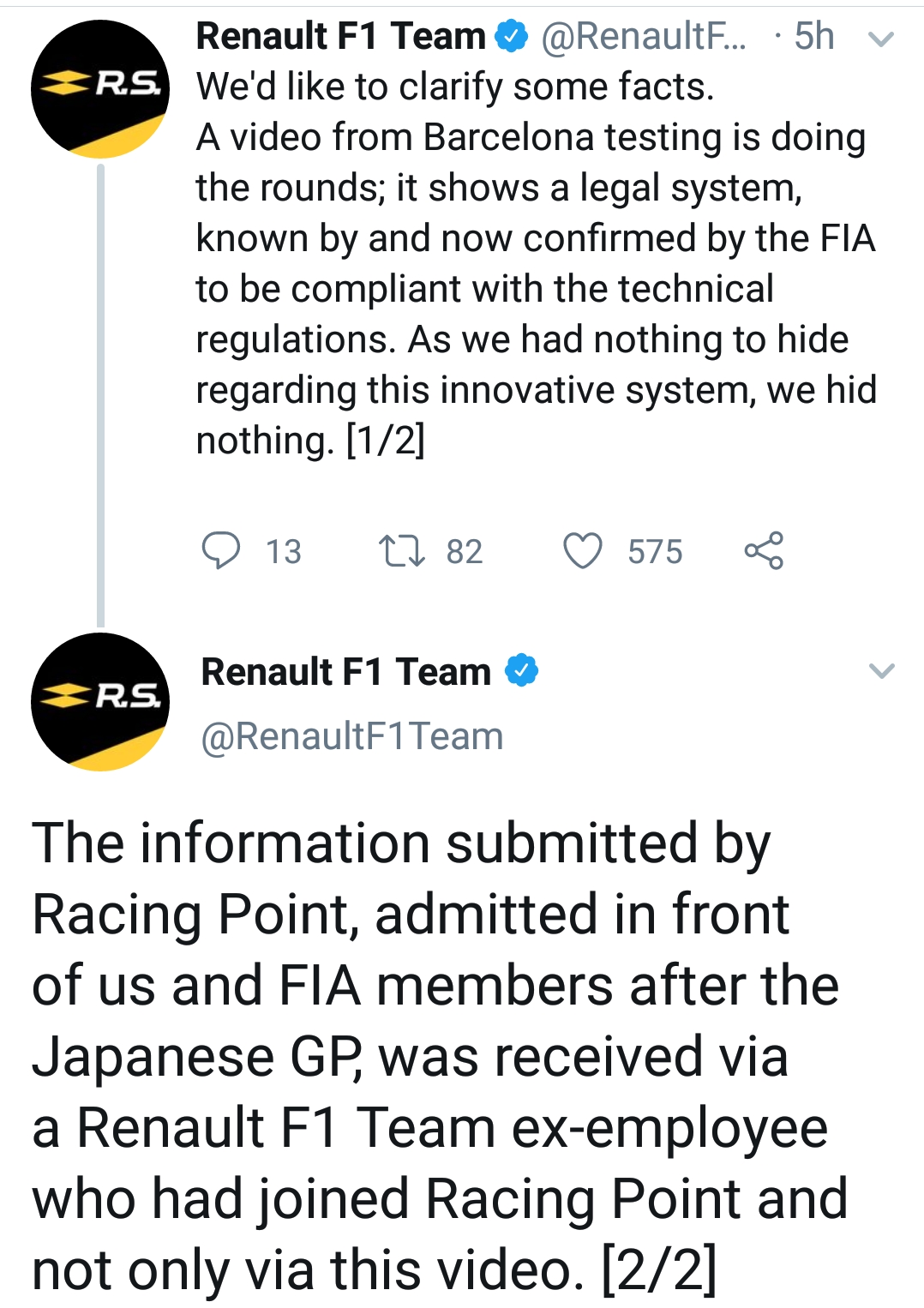 I'm just going to leave this video here which I stumbled across on YT: