No, fear not fellow clippers, it's not my hayfever getting the better of me but it's the next F1 venue in the 2017 F1 season. Designed to be the worlds fastest street circuit, this year the grand prix carries the name of the host country unlike last year when, for reasons never fully explained it carried the European GP title.

Last years race was effected by kerb bolts not being fully tightened down, causing a number of tyres to be shredded and a flying drain cover that re-arranged the underside of one of the cars. These little issues to one side, on the whole, the circuit did set out to achieve its aim of speed with some of the highest straight line speeds ever recorded in F1, along the long back straight.

The race itself saw the top 6 spread out by over a minute showing that the key to success was a powerful engine and a high top speed. Hamilton suffered badly due to starting in the wrong mode. This highlighted the 'radio driver instructions' issue once again and was the catalyst for this rule being quietly slide into oblivion not long after. The track itself drew praise from several drivers.

So, to this seasons GP. Given the criteria for success at this track, Mercedes and Mercedes powered cars must start as favourites to do well. With Perez rounding out the podium spots in 2016 and with Force India's strong performane in Canada, they will surely be in the mix as the next best Merc runners.

Ferrari will be looking to bounce back after a difficult GP in Canada where Vettel did brilliantly to recover to 4th however, his pace over the weekend could have delivered more, and Kimi suffered from failing brakes which meant his race disolved into nursing the wounded car home over the last few laps.

Red Bull's season continues to underwhelm with pre-season predictions of title challenges now very much a distant memory. With Ferrari and Mercedes clearly a measure better than RBR and with this track requiring power, Force India should be right on Red Bull's tail. Max will be looking to bounce back after his DNF, and hopefully not over Seb's front wing this time while Danny will want another good finish.

Williams should do well here. They have the Merc engine and Stroll will have a certain spring in his step after a strong enough performance in Canada to show why he's in the car. Massa is also confounding some critics this season by driving pretty well. It's clear that neither driver have a great car underneath them but they should be able to do something here.

Torro Rosso, Haas and Renault will be pounding around looking for a sniff of some points. Of these three teams, none of them seem to be setting the world of F1 on fire and mediocrity is the best they can expect. Of the 6 drivers, Jolyon Palmer has the most to loose. He MUST start out performing his team mate or come the next set of European races he'll be watching from the sidelines. The Hulk looked pretty on it in Canada so Palmer has no easy task.

Last up comes Sauber who, running last years Ferrari engine, will stand little hope of doing anything here and will be praying for a race of high attrition. Much to everyone's suprise, last year there wasn't a single safety car period and only 4 cars DNF'd so it's not looking good for the team.

So I can't see much further than a Hamilton win and should anything go wrong, Bottas will more than likely pick up the pieces.

Hmmmm, it's a high powered circuit that requires a lot of grunt from the engine. It's a street circuit so the car needs to be able to handle bumps well, be well balanced but at the same time have a high straight line speed.

I'll give both cars about 10 laps before they are smoking and stationary track side.
Click to expand

Valued Member
Shouldn't it be the Azeri Grand Prix? It's not the Britain Grand Prix.

Valued Member
It should. But I think it's a marketing thing.

Why they went with European GP last year is a mystery, though.

Valued Member
I'm going to be on holiday for this one and, after the race last year, have no concerns about missing it.

Last year being the first time this GP had been run I think it's too early to judge. My guess is a very different starting grid than last season and a much more competitive race. I'm picking Hamilton won't have the disappointment he had last year.

the race was forgettable, if im being honest I forgot to tape the race (might have been watching le mans finish live) caught the highlights but it had been a long day because 1st time I can remember I saw the start & end but I think nodded off during the middle so was very confused & couldn't follow the race because I did have the 1st clue ie how perez ended up on the podium. but I wouldn't give up on the circuit because feature & sprint races in gp2 were some of most gripping single seater racing. I saw in all of 2016. just brilliant drama feature turned into a last man standing GP as they dropping like flies only 10 of 22 finish on lead lap & sprint was great as Geovinazzi & gasly who started 8th & 18th were battling for lead on final lap

Contributor
Something to look out for in qualifying - teams attempting to run their two drivers together for drafting purposes down the long straight.

Something else to look out for in qualifying - drivers moaning about their team mate not helping them when the drafting doesn't work.

Not sure we'll be seeing much of that tbh. This isn't Monza with its wide track and four long straights. The straight here might be long but the bits in between are narrow with plenty of opportunities to get into traffic. Did we see any attempt at toeing last year?

Contributor
Incubus yes we did. Ferrari, Williams and I believe maybe Mercedes talked about it. It's an old style F3 circuit and picking up the tow is essential really.

Ah well we'll see then. I remember when Ferrari were trying it at Monza with Massa and Alonso. From the outside it looked pretty much as though what they mostly succeeded at was generating dirty air for each other in the corners before straights.

Contributor
Both Williams and Torro Rosso did it in quali in Canada 2 weeks ago with limited success. Sainz seemed to think Kvyat wasn't repaying the help he was giving.

One funny such event was in Indianapolis. During 12-lap qualifying era, Häkkinen had completed 10 laps so he didn't have a try remaining (outlap, flyer, inlap is three)

So McLaren sent both cars out, Häkkinen was only to give Coulthard a slipstream during the oval section. Mika completed outlap, was giving a tow, then moved over and slowed, returning to the pits without getting timed lap.

So Hill let Frentzen go through expecting him to be on a hot lap and was trying to follow him expecting a tow to be created. Then within 2 corners Frentzen slowed down again so Hill was wondering what the hell Frentzen was doing

for me the tow is pointless & isnt worth the hassle because he even if you luck into get a chance tow for 1 car. its almost impossible to get it for the teammate. then you have a moaning driver

no surprise Perez brought out the red flag. considering how narrow it is at T8/9. amazed it didnt happen in 2016 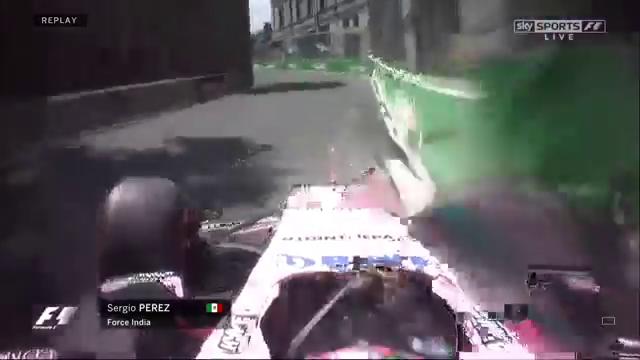 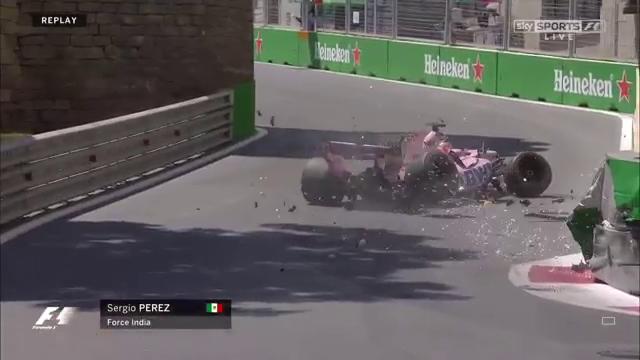 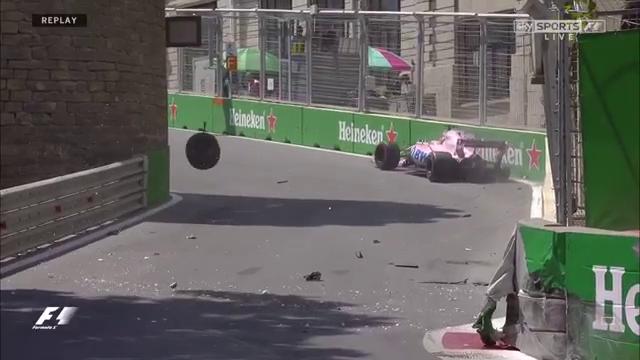 F1Brits_90 said:
no surprise Perez brought out the red flag. considering how narrow it is at T8/9. amazed it didnt happen in 2016
Click to expand

So am I. Got to be a worry that the race would be red-flagged if such a crash happened during it. No way through the debris in there, with or without a safety-car.

Contributor
Palmer hit the wall. That will help.

but them red bulls are confusing me on the joint most power sensitive circuit with monza this season, Verstappen is currently topping both sessions beating mercedes & ferrari engines supposed to be big decifcet

Cant remember a session, so incident packed where every driver some point has outbraked himself at T1 T2 T3 T8 & T15. or scraping & hitting the walls. although we just a funny situation were Vettel & massa outbraked themselves at similar times. had a queue to reverse 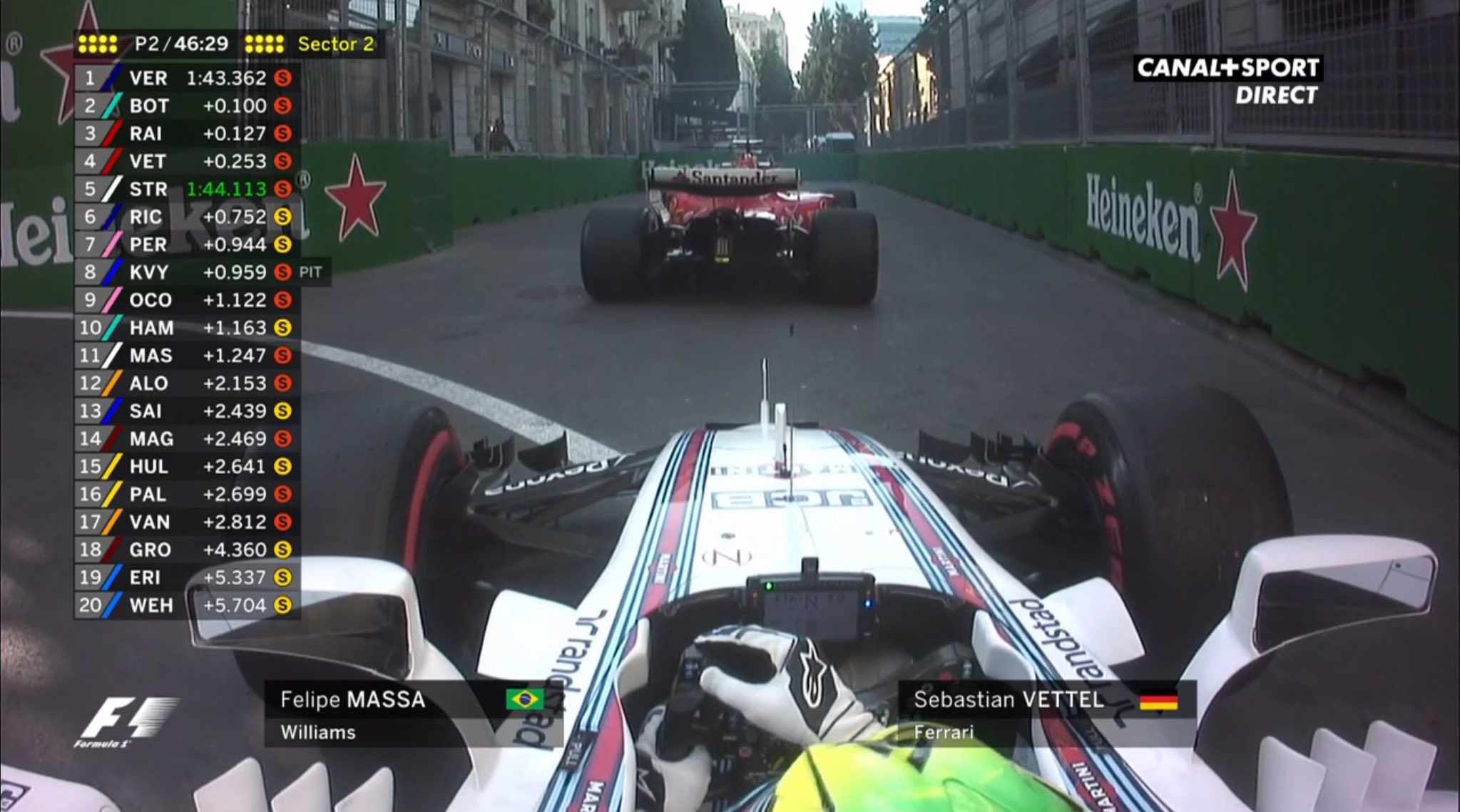