Valued Member
How much do you remember about 2014? Well, some questions may go back beyond 2014, but what more do you want?

1. Who was the lowest placed driver in the Championship to appear on the podium?


Kevin Magnussen, at Melbourne
2. How many times were Mercedes not the constructor to score the most points in an F1 race this year, excluding the 25-25 in Britain?


6 - Melbourne, Montreal, Hungaroring, Spa, Singapore and Abu Dhabi
3. Before Melbourne, when was the last race that Red Bull had scored no points (half point for year, half point for circuit)?


Juan Manuel Fangio
5. Nico Hulkenburg finished 5th four times this year. How many times in his career has he finished higher than 5th?


Twice - 4th at Spa in 2012 and Yeongam in 2013
6. This is the first time Sauber have finished outside the Constructors' Top 8. Who was the last driver to score 0 points for Sauber over a full season?


Pedro Diniz, back in 2000.
7. Sergio Perez scored the 11th podium for a Mexican in Formula One in Bahrain, which other driver has done so?


Kimi Raikkonen started 2nd
10. Australians have now won 38 Grands Prix in F1 after Daniel Ricciardo's 3 wins this year. Aside from Red Bull and Brabham, name the other three constructors who have seen Australian victory (for a total of two points)


Cooper and Williams are worth half a point.
Shadow are worth a full point
11. This is the rundown of the finishers on the lead lap of which Grand Prix? 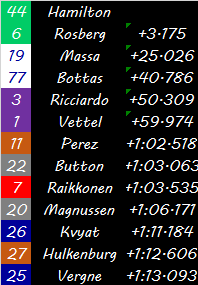 The Italian Grand Prix
12. How many drivers recorded fastest laps in races this year?


8
13. With the exception of Hamilton and Rosberg, name the others.


For one-third of a point each:
Sebastian Vettel (ESP, USA)
Kimi Raikkonen (MCO)
Felipe Massa (CAN)
Sergio Perez (AUT)
Valteri Bottas (RUS)
Daniel Ricciardo (ABD)
14. Mercedes engines scored all of the pole positions. Who was the last constructor to do this, and when?


1969, Ford Cosworth. Half point for year and constructor.
15. Which was the last year that Mercedes engines did not score a pole position?


2002
16. Ferrari's run of winning a race in 20 consecutive years ended this year. How many races did the constructor win in this time?


c - 243.
19. Which driver scored a quarter of his team-mate's points, with his team-mate only picking up points in Monaco and Canada, for the second time in his career?


Pastor Maldonado - who scored 1 to Barrichello's 4 in 2011, and 2 to Grosjean's 8 in 2014
20. There are three pairs of drivers who finished on equal non-zero points in the championship. Maldonado and Bianchi are one (2pts). A point each for the other two.


Romain Grosjean and Daniil Kvyat on 8 points, Kevin Magnussen and Kimi Raikkonen on 55 points
21. Daniil Kvyat set the Russian record for best grid start in Sochi, then matched it due to the dq of the senior team in Abu Dhabi. But who holds the Russian race record, and what position is it?


Vitaly Petrov, 3rd (half point for each). Australia 2011.
Other Categories

We interrupt this quiz to give you an opportunity to earn three points on a range of other motorsport series. However, you can only play one of these series, so choose wisely. And good luck.


FE1. Which team is the only one to see 6 points finishes thus far?

Dragon Racing
FE2. Which driver is the only one to set fastest lap and score in the top 10?


Jaime Alguersuari
FE3. Who is the only driver to compete in all three races and not score a point?


Michaela Cerutti
WEC1. The Championship was won by Anthony Davidson and Sebastian Buemi. For half a point each, name the four circuits the two were victorious.


AF Corse (Ferrari) - either name gets you a point
Bruni, Fisichella and Vilander
I. For a point each, name the three highest finishing former winners of the Indy 500 in this year's race


Jorge Lorenzo at Aragon
MG2. Other than Dr. Rossi, who was the only non-Spaniard to start on pole?


Andrea Dovizioso at Motegi
MG3. Who was the lowest placed rider in the championship to reach the podium?


Cal Crutchlow at Aragon
Back to F1


Valteri Bottas, P3
23. Adrian Sutil moved to a record 128 Grands Prix without a podium. Who will be the only driver starting 2015 in the top 50 in the teams already announced?


Nico Hulkenburg - 10th with 76 starts
24. Daniel Ricciardo won his first Grand Prix at attempt 57, putting him level with Jo Siffert. But how many of 2015's announced drivers went more than 69 Grands Prix before picking up their first pole?


Mark Webber started 2nd as Hamilton did in 2014.
26. Which driver, other than Lewis Hamilton, failed to set a time in Austria Q3?


Nico Hulkenburg
27. At which race did we see the youngest podium of 2014 by average age?


Lewis Hamilton, Nico Rosberg, Felipe Massa - av. age - 30y 10m 30d - Interlagos
29. For half a point each, name all of the four reserve drivers to drive on Friday at Silverstone.


Nelson Piquet in 1987
33. Which race, which is consistently on the calendar, has the longest run of not producing a World Champion?


Hungary, which has not seen a victory for the eventual World Champion since 2004.
34. How many drivers gained more than 15 places from lights to flag in one Grand Prix this year?


2 - Hamilton in Germany and Hungary, and Ricciardo in Abu Dhabi
35. Winning 4 races in a row once again became the domain of the champion. Who is the only driver never to become a World Champion to win 3 on the bounce?


Stirling Moss in Pescara and Monza in 1957, then in Buenos Aires in 1958
36. Who was the last 29 year-old to win the Formula One World Championship?


Jenson Button, in 2009
37. Lewis Hamilton moves up to equal fourth on the all time list for winning in consecutive years, with 8. Who is he level with (he's behind Senna, Prost and Schumacher)?

But a shit score..

Just you wait until I get round to doing it I'm gonna blow you out of the water Mr Brown...

Contributor
You misunderstand, I inadvertently deleted the previous two points which were:
1. Ninety eleven.
2. Mephistopheles is an arse.
M

gethinceri said:
2. Mephistopheles is an arse.
Click to expand

Well that goes without saying...

Contributor
12.5 liked the break in the middle

Contributor
13 and one sixth! Not spectacularly rubbish...
Good quiz teabagyokel

Staff Member
Valued Member
Mephistopheles my "some" was way more than that.
M

Contributor
Mine is tiny..