Valued Member
Year two for Team Lotus saw the retention of two seasoned old hands and former Grand Prix winners for the race seats. But who came out on top? 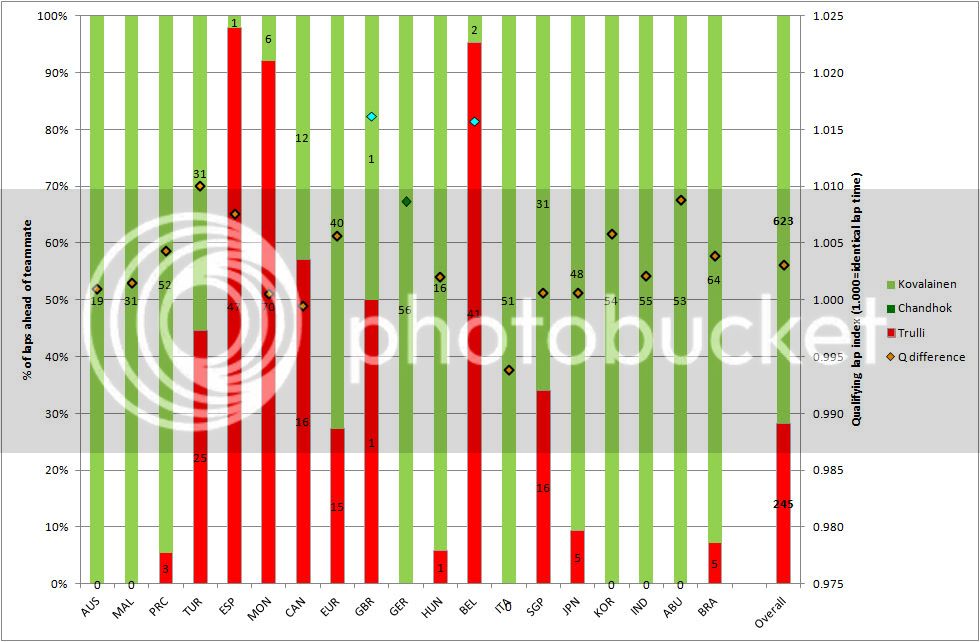 
Note that Karun Chandhok replaced Jarno Trulli for the German Grand Prix only.

The qualifying battle was extremely one-sided, Jarno only beating Kovalainen at Montreal, a surprising result for a driver who has a reputation as a qualifying specialist. The qualifying results do seem to support one of Trulli's other labels, however - that of being a weak wet weather driver.

In the races it was a more mixed picture, and over a stint in several races there was little to choose between the two. Starting towards the back of the pack, contact, pitstops and retirements clouded the pure competitive picture on a few occasions too. Certainly Trulli can point to several good results from early in the season, including the two 13th places that owed something to good fortune, but nonetheless secured the team's crucial tenth place in the championship.

In the second half of the year, however, Kovalainen was more often able to convert his qualifying advantage into a dominant race result. Across the last five races he led Trulli for 194 consecutive laps, a rare achievement this season with the frequent fluctuations in the order around pit stops.

Rumours continue to circulate to the effect that this team's driver line-up may not remain the same into a third year. Based on their performances in 2011, there seems little doubt that, after 15 years in F1, it would be Jarno Trulli to make way.

Valued Member
So he did, thanks tby.