Valued Member
1. Almost all of the Grand Prix in 2011 seem to be on the anniversary of a 2005 race. But who made his first appearance for Ferrari at Mosport Park on 9th October 1977?


Gilles Villeneuve
2. In which year was this Japanese Grand Prix start? 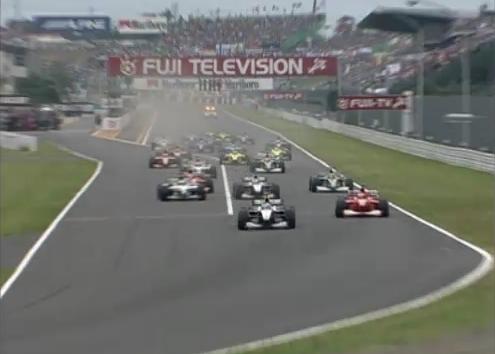 2000
3. Sebastian Vettel has started 76 Grands Prix. Which other driver on the grid will (probably) make it 77 in Suzuka?

Aguri Suzuki and Takuma Sato are the only two Japanese drivers to score a podium. For half a point each name the circuits and years that this happened.


Suzuka in 1990 and Indianapolis in 2004
5. Masahiro Hasemi's Fastest Lap in the Kojima in 1976 at Fuji was almost certainly a mistake. Which Japanese driver is the only other to score a Fastest Lap (at Adelaide in 1989)


Satoru Nakajima of Lotus
6. Takuma Sato scored how many of his 44 points in Japan?


Gerhard Berger
8. Who was the first person to win the Japanese Grand Prix twice in a row?


Mika Hakkinen in 1998-99
9. Which is the most successful engine manufacturer in terms of Japanese Grand Prix wins?


Renault with 8, including the last 4 dry races in Japan!

Contributor
5. Happy with that.

Valued Member
Only 5. Can't believe I couldn't remember the answer to Q7.