Contributor
Most of you will have an idea of what you think was the greatest drive ever, in my opinion it was the drive at the Nürburgring in 1957, maybe I can convince you too agree with this race report I made.

The 1957 German Grand Prix was held at the mighty Nürburgring, and is still to this day widely considered as one of the best drives in the history of motor racing. On the back of a dismal weekend at Aintree Maserati’s Fangio still had a 12 point lead over Luigi Musso, thanks to his three previous wins. Fangio needed just a win with a fastest lap, and Luigi Musso finishing 4th or lower to secure the title.

Fangio qualified on pole with an impressive 9:25.6, 16 seconds faster than his lap record he set in 1956, and he would start with Mike Hawthorne and Pete Collins alongside him. The race was also the first of six Formula 1 races where F2 cars would start on the same grid, but they couldn’t score World Championship Points. The idea behind it was that increased participation would mean that spectators could see more action whereas normally they would have to wait a long time for the cars to come back round, especially in the earlier laps.

On the race day the Ferrari’s had decided to run the whole race, which was three and a half hours, without pitting, and Fangio decided to choose a softer tyre and a lower fuel level, meaning that he would have to pit. Fangio made a poor start and ended the first lap in third a few seconds off the two Ferrari’s, but he regained his composure and took them both on lap 3. He now needed to build a big lead so he could make his pit-stop.

Fangio had a 28 second lead over the two Ferrari’s, currently headed by Collins, when he pulled in for his pit on lap 12. The pit stop was a disaster, the nut for the right rear wheel was dropped by a mechanic and it rolled under the car, and by the time he was pushed back onto the race track, he had a 45 second deficit to the two Ferrari’s and a near impossible task ahead of him.

In the next laps he began to claw back the gap, breaking and re-breaking the lap record. On lap 20 he set a 9:17.4, and was right behind the Ferrari’s, he put a brave move up the inside of Collins into Nord Curve and took second place. Collins then backed off with clutch problems leaving it as a battle for first a second. Musso was in 4th a very long way off the leaders, so if Fangio could pass Hawthorn the title would be his. Later on lap 21 Fangio forced past Hawthorn, but Hawthorn wasn’t going to give the race away that easily. Despite pressuring Fangio for the last lap, there was nothing he could do.

The race ended with Fangio less than four seconds ahead of Hawthorn. His 24th race win, is arguably his greatest, and it has won him his fifth and final title as he would retire from Formula 1 racing but for two races in the 1958 season. 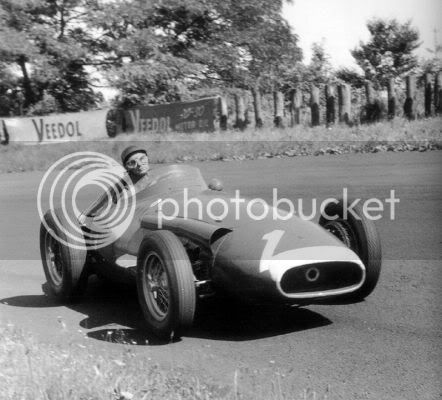 *This is my first article, so please allow for a couple of mistakes

He actually went on to break the lap record 9 times in the last 10 laps with 7 of the records occurring on successive laps.

Valued Member
Nice article ToonCheese. Completely out of my era but sounds like an incredible achievement by Fangio. I feel lucky to have seen as many as many years of F1 as I have but what the drivers achieved in the 50's, 60's and 70's was something else and I wish I had been able to see it.

One question, I think from this era, didn't Moss win the Monaco Grand Prix with an average lap time faster than his (or the) pole lap?

Contributor
I havn't heard that one before, so I had a look on a couple of website and there is no record of it. However I did a couple of sums and in 1961 his average lap time was around 1:39, the same as his pole lap. But the fastest lap was 3 seconds faster than the pole lap suggeting a damp qualifing. It is still regarded as the best drive of his life though.

Contributor
Great article tooncheese.
I am old enough to remember this race.The race was not televised so from the Sunday until the following all there was, were some few paragraphs in the UK press.
But on the following Saturday the local cinema ran a special film programme for kids.That was on Saturday morning.
And we were all waiting for Pathe news in the interval to appear.Pathe news usually showed highlights from F1 and sure enough there it was.
Wonderful effort by El Maestro and one of the truly great drives in history.