Your top 10 drivers of the season

FB said:
Fantastic picture of Fernando on that link.
Click to expand

How did they get that camera angle?...

How did they get that camera angle?...

Valued Member
For those that haven't seen it, here's the picture. I'm guessing McLaren spent most of their budget for 2016 on a selfie stick and forgot to develop the car.

Premium Contributor
Since McLaren more than halved the gap to Mercedes they could have been in front of Mercedes then.

Premium Contributor
And now for the BBC Driver of the Year which is a bit of a shock considering that it is effectively set by British votes.

...it was a brilliant victory in Monaco that kick-started his campaign as he produced a masterclass in defensive driving to keep Daniel Ricciardo at bay for 45 laps.
Click to expand

Please stop giving drivers credit for defensive driving at Monaco, BBC. That cannot be the highlight of his season, can it?

Valued Member
Just a thought on that, I know many of the Hammy fans point at the engine failure in Malaysia but had Red Bull got their shit together in Monaco then Danny Ric would have won and the points situation would have been different again. Anyway, the Autocourse Top 10 for 2016 is:

Valued Member
Hmm. The same Bottas who was driving for Williams this year?

Premium Contributor
No, due to some shenanigans by a certain Italian ex-team principal it was his brother who was driving in 2016.

Premium Contributor
I don't think I have a top ten, maybe a top five, or a top one. I'm not even sure about that.

Premium Contributor
Well Grosjean must have been the worst driver of the season, he didn't know how to use his brakes properly.

Here is the BBC's driver's list based on the public vote

A lot of appreciation and love for the two Mclaren drivers

Bill Boddy whoops did not see you posted this earlier but take a look at the worst drivers list
Last edited: 29 December 2016

Below that is the most disappointing drivers list which is topped by Kyvat, then Gutierrez then Vettel - you can understand why these 3 make the top 3

) so how people vote them on here is absolutely brainless

Premium Contributor
With the car advantage that Mercedes had Il_leone they should have won all the races, maybe since they didn't they should be at the bottom of the best drivers list. 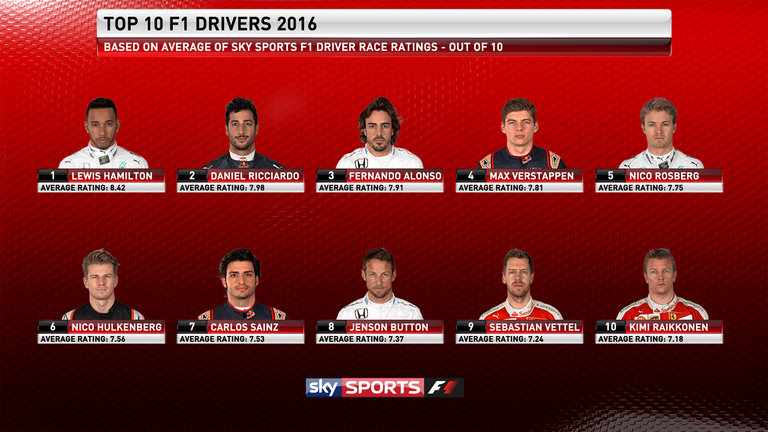 Lewis Hamilton has been crowned Driver of Year in Sky Sports Digital's driver ratings for the 2016 season.

After every Grand Prix, the drivers who finished the race are marked for their weekend-long performances out of 10 in a feature on the Sky Sports website and mobile apps.
To find out who has come out on top in 2016, we've worked out the average scores of each driver during the season.

The average is found by dividing a driver's total ratings score by the number of races they finished.

And Hamilton, despite being pipped to the world title by Nico Rosberg, has come out on top with an average rating of 8.42 out of 10.

Daniel Ricciardo is second, with Fernando Alonso and Max Verstappenclose behind in third and fourth places respectively. New world champion Rosberg rounds out the top five.

Other recognised stars of 2016, including Carlos Sainz and Sergio Perez, also find themselves in the top half of the ratings grid.

In terms of team-mate comparisons across the whole grid, the closest averages come at Renault where Jolyon Palmer and Kevin Magnussen were separated by just 0.4 in the ratings.

The widest difference was at Toro Rosso - 1.36 - between Sainz and Daniil Kvyat, who endured a tumultuous year after his demotion from Red Bull.

That was all self explanatory. It's how Sky have graded drivers over the season for each race and how the results came out at the end. I'm sure you'll all agree with some and disagree with others. But there we have it, another panel of experts decisions.