Who Is Tilke's Biggest Fan?

So, with that joke out of the way, which driver got the most points on the Tilke tracks for those 9 races this season (including New Hock). Vettel, I hear you all shout. WRONG!!! 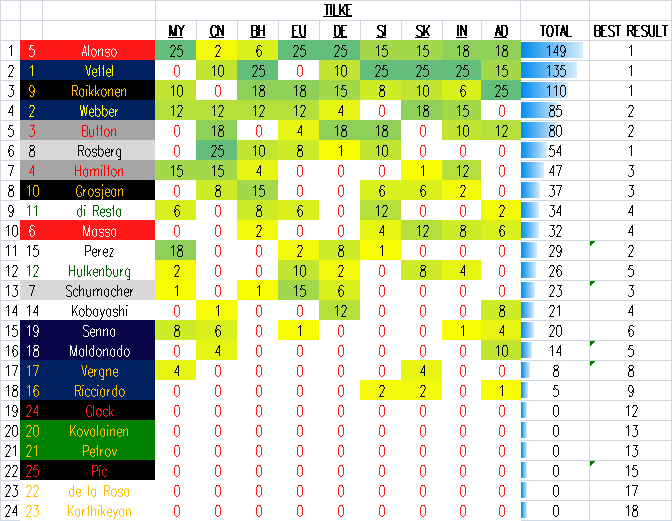 Due to Vettel's no scores at Sepang and Valencia, the king of Tilke's tracks is Fernando Alonso, who has taken all three of his wins on Tilke's tracks and taken four more podiums. Doing particularly badly is the unfortuanate Lewis Hamilton, who has four blameless DNFs in those circuits. Other than Button, the other significant gainers on their team-mates are Paul di Resta, cushioned by his usual excellent Singapore performance and Bruno Senna! 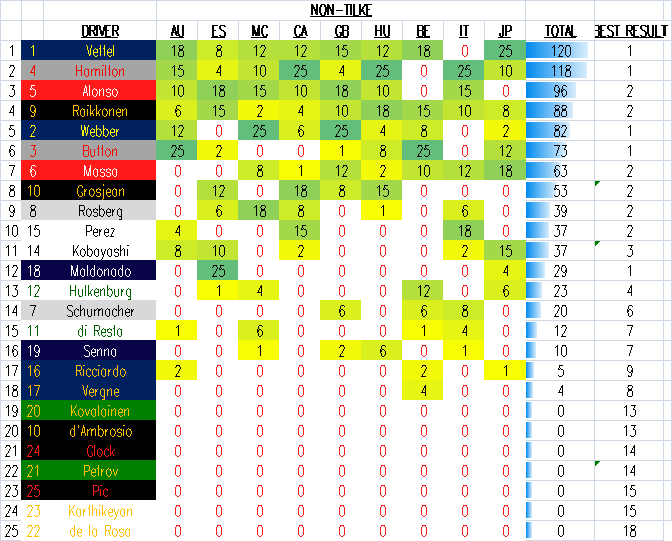 As if to underline the effect of Hamilton's misfortune he is only 2 points behind Vettel on these circuits. Here, Button, Webber and Hamilton take their only wins, whilst Vettel has actually done worse on non-Tilke tracks; the bar is slightly lower! Sauber's guys are dead level, while Ricciardo is ahead of JEV. If Hamilton's form at Interlagos wasn't rubbish and Red Bull's awesome, I might say this one was up for grabs.

So two half-Championships, both far more competitive than the real thing at this stage of the season. And some interesting facts out there too...!

Contributor
Well the only thing that I can conclude is that unreliability has cost Hamilton the championship.

mjo said:
Well the only thing that I can conclude is that unreliability has cost Hamilton the championship.
Click to expand

I don't see how you reached that conclusion. Vettel's average points per finish is higher than Hamilton's on both Tilke and non-Tilke ciruits.

Staff Member
Without wanting to turn this into yet another Hamilton focussed thread, if Hamilton had managed to finish those races which he retired from due to mechanical problems, then he would have had more points and Vettel less, due to Hamilton finishing ahead.
So the points per finish would change for both drivers.

Similarly, the other screw-ups by the team resulted in less points and in some cases, wins.

I think most people are in agreement that McLaren pretty much threw away both championships this year, through one reason or another.

Contributor
Is Hockenheim really a Tilke track, half of it is still untouched...

Seriously, my conclusion on that debate was that the essential nature of Hockenheim changed with Tilke's adaptation; the stadium section is different because the wings are so much thicker than they were.

Contributor
Being the cynic that I have become, I still have the nagging suspicion that there is some sort of financial tie between Tilke and BE.