Although it got lost amidst the bigger story of the championship, I felt that Vettel's comeback drive through the field and the context in which it was done was one of the most stellar performances of the year. In a car that got a decent whack, had damaged rear body that significantly affected the aerodynamics and with a cracked exhaust that required the power to be turned down, the ultimate speed of the car was so lacking that when the track was at its fastest (around lap 36) he was 0.55 seconds slower than Alonso and a full 1s off the pace of Hamilton. However, with the initial damp and tricky conditions, his talent came apparent. Nothing made it more apparent than when on the second lap, after haven been spun and unsure of the car's behaviour, he set a laptime that was fastest of all by an unbelievable 0.54s than Hamilton. However, it wasnt just that, below are the laptime comparisons of Vettel vs top 4 (ignoring lap 1 and pitstops)

However, people still focus on Alonso reaching the podium even though he went off track couple of times, was nearly a minute behind leaders but closed in due to safety car, was not even in podium contention until Hamilton and Hulkenberg collided and even then needed a slowing Massa to finish P2. In my opinion Vettel's drive was of a much higher class under immense pressure of disintegrating car and non working radio.
M

Contributor
I believe this subject has been covered before and I also believe that good fortune on Vettel's part had a lot to do with it, anyhow it doesn't matter he did what he had to do, he had some bad luck and he he had some good luck and at the end of the day he was WDC

Contributor
In recent years we have seen more impressive fights through the field from both Button and Hamilton at Interlagos. The difference is that they managed to do it without hitting anyone. It was a good drive after his early pressure drop and I would go so far as to say notable, but I wouldn't call it special. He did well to regain his composure after his initial mistake and clawed back enough to secure the title. Not a great race for him as a whole but he was lucky enough to still have an opportunity to salvage a wreck and took full advantage of it.

Valued Member
He didn't actually lose that much performance nor that much time. He was right on the back rather than coming from way behind, and the rain made the pit-stop situation more fluid.

If you want a great Vettel comeback drive, it occurred in Belgium.

ExtremeNinja said:
In recent years we have seen more impressive fights through the field from both Button and Hamilton at Interlagos.
Click to expand


And Schumacher, if anything, Vettel's 2009 Interlagos charge through the field was more impressive than 2012, it seems to be all the rage at the moment!

Contributor
One thing that springs out in mind in Vettel's race, is the second last pitstop they made, only for it to rain 30 seconds later, and when he pitted for intermediates, the tyres weren't ready, and lost some time there too.

Was helped with the retirements and the safety car.

It was a good comeback drive, great considering the circumstances. It got overshadowed by the race, and I can't say I'm surprised by that, because that race was awesome.

Contributor
Any time he unfortunately lost was fortunately gifted back to him. Any mistakes made by himself or the team were leveled. I am not saying that this was not in part due to Vettel, so please don't take that as my meaning, but the gods appeared to be shining on a driver and a team that made a handful of mistakes on the day.

It's always a shame with some of these discussions, that statements are never substantiated.
It's hard to discuss an abstract statement.

I hope someone will substantiate for instance:

Contributor
It is you who has added the caveat of "post turn 3".

For starters, the rest of the race was gifted to him. He was lucky that he was even still in it and luckier still that he finished the lap in touch with the pack. Time he lost on ill-timed pit stops was regained in well-timed pit-stops and well-timed safety cars.

Feel free to disagree but I have answered your question plain and simply in no way that has not been already explained.

He drove well past turn three but when you add it all up, it was a lesser race than he could have driven by a long way.

ExtremeNinja said:
Feel free to disagree but I have answered your question plain and simply in no way that has not been already explained.
Click to expand

I am willing to agree or disagree with something concrete, not with an abstract, unsubstantiated 'idea'.

ExtremeNinja said:
we have seen more impressive fights through the field
Click to expand

Vettel's fight through the field was post turn-3.
So I ask again, what did Vettel do wrong to deserve this unpraise?

And since your praise Hamilton, is being blind-sided by a driver that was out of sight really so much more 'punishable' with non-praise than outbraking yourself?

And how did he regain time in well-timed pit stops?

By the time of the first safety car, he was already back in p5; Hamilton ended in p7, so again a difference in judgement that seems unsubstantiated.

Contributor
Vettel could have not run into a sign whilst under a safety car post lap three. Is that the sort of thing you meant?

mnmracer said:
By the time of the first safety car, he was already back in p5; Hamilton ended in p7, so again a difference in judgement that seems unsubstantiated.
Click to expand

what? I think I have misunderstood you here. He DNF'd.

mnmracer said:
So please substantiate, what do you think he could have done post turn 3 that he failed to?
Click to expand

Not crashed at turn 4

Staff Member
If not for the Red Bull car which seems to be built like a tank, Vettel would have been a bystander that day.

For evidence I present this: 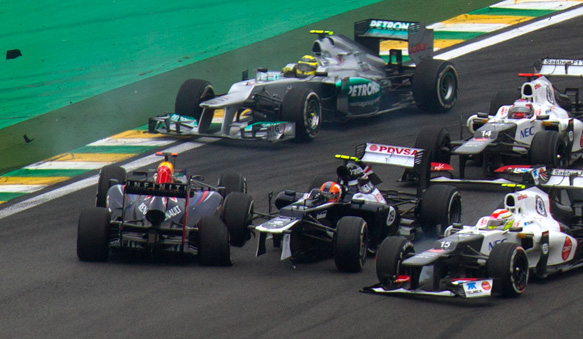 Valued Member
Is that a Williams without a front wing? how unusual. Not

teabagyokel I don't know what you would classify as lost performance, but being 1s slower in dry conditions yet being fastest on the immediate lap after being hit is an impressive achievement by my reckoning, in fact he was quicker than Alonso on the next 6 laps even though he was fighting through the field, although Alonso was outbraking himself and escaping via run off. And Ferrari was'nt the slower car as both Alonso and Massa had a quicker fastest lap than Webber in the undamaged Red Bull while Vettel was half a second down.

the Red Bull was set up for wet type conditions with high downforce anyway. So the rain was a God send for Seb because he admitted he was a sitting duck down the straight in the dry

I should add did I see Schumacher pulling over to wave Vettel through ... I don;t remember Michael doing that too often in his selfish career
M

Contributor
Well Schumacher is Vettel's best mate and it was his last race and so him pulling over was a no brainer, it doesn't make for good or serious racing in my book, but at least Schumi left the sport in the same way he entered it and the way he lived it, that is to say with controversy..