Contributor
The next Schumi or the next Trulli? What do people on here think?

I have to say I'm a Nico sceptic - although I'm not sure I like being. I would actually love to be proved wrong and see him do well but all I keep seeing is a driver who promises a lot and then slips backwards. If you look at the last 2 races where he's gettign credit for 'coming to the fore' he lead in China and ended up 5th and then he starts 3rd in Turkey and ends up 5th again around 50 seconds behind the leader. Seems to be a common pattern with Rosberg which is why I use the Trulli comparison.

If we go back even further I honestly believe that the 2009 Williams was a race winning car - certainly at the begining of the season when they were one of 3 teams to be running the double diffusor. I think Rosberg bottled it. I can't get over the fact that in Malaysia that year he took the lead off the line and pulled out a 15 second gap to second place and yet some how ended up finishing the race 9th! 9th!!! I know the rain messed the race up somewhat but no one else went backwards like that so I just can't understand that result. The same year he had a massive chance of winning the Singapore GP and messes up coming out of the pits.

I know the boy is quick and I know he scored the highest ever on the Williams technical test thingy but I just see him as someone who goes missing in races. I know right now he's beating Schumacher hands down but can't help but feel we have a Herbert/Barrichello/Stewart or Hill/R.Schumacher/Jordan situation going on here and that the day the Merc actually has the oppotunity to win a race it'll be the same day that Rosberg finds Schumacher in front of him.

Now it may be that I'm just a jaded cynic from all those days of cheering on Jean Alesi only for him to break down/crash/spin off within inches of victory and that I maybe just don't have the energy to support another driver of that ilk I'm not sure so thought I'd put it to you guys here on Apex.

Staff Member
I think he's probably top 5 or so, but it's very difficult to know for sure due to the current Mercedes car.
I think it's fair to say it doesn't have the race pace of the front runners so 5th is, I would say, a pretty damn good result: http://cliptheapex.com/pages/2011-results/

It's the age old question of F1 though; is it the car or the driver?
Most in the business seem to think it's 90% (or so) car and the rest is driver, so put Nico in a Red Bull, McLaren or Ferrari and how would he fare against Seb V, Lewis or Fernando?

I happen to think he probably isn't quite good enough to beat any of those three, but he isn't far behind.

Regarding his team mate, I can only see the gap widening as the car improves.
We've discussed Michael elsewhere though http://cliptheapex.com/threads/schumacher-time-to-quit.2552/

Valued Member
I am also a Nico sceptic. I just don't see "it" with him. I think he is better than Trulli though, Jarno is my estimation has always been a weak driver in the sense that his wheel to wheel racing ability is virtually nonexistent. Stick Jarno in a vacuum with a bottle of wine and a leisurely country lane to drive down and he'd be the quickest guy in Yorkshire. He'd be a terrible endurance racer.

Rosberg has good speed but I've never seen anything from him that makes me go, "wow, this guy's got it". I don't remember a classic drive from him where he looks like he's on a mission, nor a drive where he really convinces you that he has the outright pace to do something.

I look at him as something of a Jenson Button Mk.2 ;

- Signed by Williams at a very young age

- Scored points early in his career

- Had a few podiums

- That first win eludes him for quite a few years

- Moved to a manufacturer team with disappointing results

In fact totaling both drivers' points over the first 6 years of their career (Rosberg has been in F1 for 6 years), Jenson Button would have 157 points and Rosberg would have 138.5, having removed Nico's added points in 2010 under the newer points system. It's not a big difference.

Whether Rosberg will eventually do a Button and become WDC, I seriously have my doubts unless he can get himself into a Red Bull and somehow overcome Vettel. I think there are a couple of non-WDC drivers I'd take over Rosberg right now. I just don't see what the hype is all about.

Valued Member
I'm not convinced by Rosberg either but there are many who could be considered "journey men" who have come good. Alan Jones was making up the numbers until he stepped into the FW07 (alright he won a race for Shadow), John Watson appeared to be in the twilight of his career until John Barnard penned the MP4 and he nearly won a WDC, Jenson Button was almost without a drive until Ross Brawn flicked a quid across the table to Honda and he creamed everybody in 2009. Webber was sleep walking into retirement until Newey got his mojo back.

I think the jury is still out on Nico, I'd love to see the Mercedes more competitive but it's the age old question, as Brogan points out, is it the car or the driver? How would Alonso, Hamilton or Vettel do in the Merc? Unfortunately we'll never know.

Nico is a bit of an unknown quantity but to compare him with the mobile chicane/sleeping policeman that is Jarno Trulli is patently unjust! 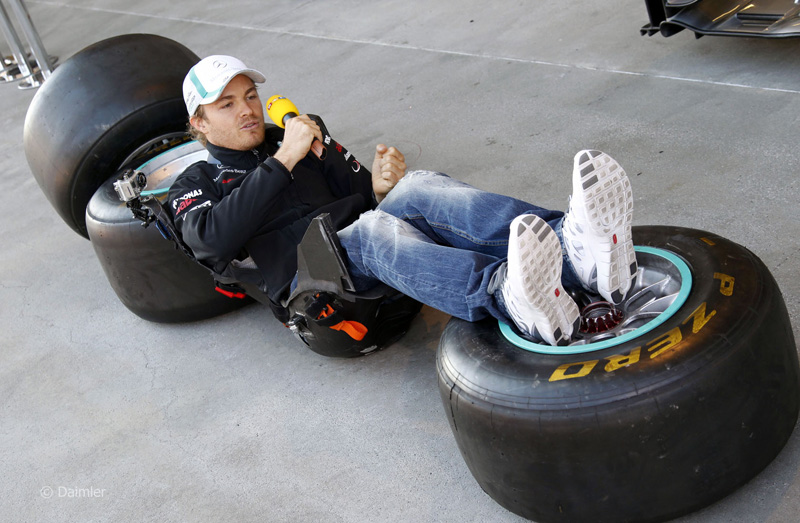 But he's soooooooooooo pretty without the bum-fluff

Seriously though, well a little bit, he's very good but like so many hasn't really had the tools or the team to do the complete job. Comparisons to button are the fairest of all and that will cloud your judgement as much as anything...

Brogan said:
It's the age old question of F1 though; is it the car or the driver?
Most in the business seem to think it's 90% (or so) car and the rest is driver, so put Nico in a Red Bull, McLaren or Ferrari and how would he fare against Seb V, Lewis or Fernando?
Click to expand

Maybe it would be more interesting to put Seb in the other Merc, then see how he gets on.

Contributor
I'd like to disagree with you RasputinLives, but im not 100% sure myself. His performance against Schumacher is obviously excellent, but what kind of Schumacher are we witnessing in 2010-11

RasputinLives said:
...and that the day the Merc actually has the opportunity to win a race it'll be the same day that Rosberg finds Schumacher in front of him.
Click to expand

I know where your coming from with that comment. Harsh, but just the way F1 works sometimes...

Are we witnessing a Schumacher who doesn't have a contracted seconder for a change?
Sorry... wrong thread...

Valued Member
Rosberg is tough to assess, because he simply hasn't had a yardstick in the other car since his début season, where he was beaten by Mark Webber?

Alexander Wurz, Kazuki Nakajima and Michael Schumacher have been dispatched with ease, thus far, but how much of that was down to their weaknesses or Rosberg's strengths.

Your point about Malaysia needs to be adressed. That race was a lottery down to the end, but on lap 26 he was still in 2nd place. He lost more places than others, but it is not fair to judge on those mad minutes!

I think the comparison with Button is probably the best, I think he's a very decent driver. However, we need to see him take on someone who we roughly know where they are to make a definite conclusion.

What do we know?

Staff Member
They may not rate them but their results and performance (especially against team mates), speak for themselves.

I think I'd like to join the "he's good, I'd like to see him get some better results soon, but I haven't seen the killer instinct come out yet" camp

Valued Member
It's really tough to say. Fisichella was highly rated until he got into a decent car, then flopped hugely. Whereas Button rose to the occasion a lot more impressively than most, myself included, would have expected.

Lewis Hamilton rates him highly, which is worth a lot more than my own opinion. I think he would do a good job if given a better car; possibly an outstanding job. But mainly I just hope he gets the opportunity to prove me wrong, or right.

Finally a note on his debut season - apart from his being a rookie against an experienced driver, actually from mid-season onwards in 2006 there wasn't a lot to choose between him and Webber. Perhaps more significantly, at the great driver's circuit of Suzuka he outqualified him by a wide margin, and led him in the race too.

I knew I could count on you Sir Galahad to put Nico's rooky season into perspective.

Contributor
Until Nico gets himself into a better car and team. I can see him been a nearly man. He's abit like Massa IMHO, i reckon he's got the fight in him to challenge for titles but he'll miss out on them because he doesn't seem to have the aggression of a Hamilton, Vettel or Alonso.

I hope i'm proved wrong because i have alot of respect for Nico, but i can't see it happening for him.

Contributor
I see a driver who has excellent speed (Singapore 09 qualifying springs to mind) he can overtake, he can defend, he is consistent and makes few mistakes, he is hugely confident and excellent off the start. He hasn't ever had the car although the potential for his best finish was scuppered due to his own mistake.

The guy is always best of the rest - I think potentially his main downfall may be his ethics when it comes to the rules. Alonso, Vettel, Hamilton and Schumacher, even Button will all push the boundaries and take risks which pushes them on the border of arrogant/aggressive. But for me it's this attitude that separates these drivers. I think Nico has it in him though, he's getting frustrated now.

He needs a better car. Period.

Hamberg said:
I think potentially his main downfall may be his ethics when it comes to the rules. Alonso, Vettel, Hamilton and Schumacher, even Button will all push the boundaries and take risks which pushes them on the border of arrogant/aggressive. But for me it's this attitude that separates these drivers. I think Nico has it in him though, he's getting frustrated now.
Click to expand

That's what makes champions! Nothing to do with arrogance or aggression, just self-belief and a desire to win!

They all need a better car - even Alonso and Hamilton. But sometimes it comes down to the "best" driver and it isn't always good enough to say "he would be better if he was driving...." - there are 24 drivers in this championship and they are all there for the same reason, they all want to win - if that is not the case they should go and give up their seat to someone with far more balls.

On topic - Nico, OK, could do better, beating his "old" team-mate - not yet a patch on his Dad.