Well that's the first test completed, what have we learnt? MB seem to be sitting pretty, Ferrari appear reliable, RB who knows? and TR may be quicker than RB, but not for long. Williams seem to be in a similar position to last year, and Sauber probably the same. So that leaves McLaren and Lotus, Lotus in the 3-6 finishes and Mclaren really could be anywhere from 2 - 7, if they can sort out own goals then 2-4, The Japanese won't want to lose face again, the reason they left last time, despite the excuse. Fernando's comment lets work together to Jenson is "you sort the car out, and I'll drive to win if Ron plays by my book". Should Ron not play or Jenson does a Lewis ( but a touch more subtle) there could be trouble, but I don't see banging wheels, just a pit stop overtake, Ron says he was quicker, Fernando says they screwed my stops, stopwatch says Fernando's stop was 0.2 secs quicker

Valued Member
Anyone want my utterly unreasonable attempt to predict the grid in Melbourne? 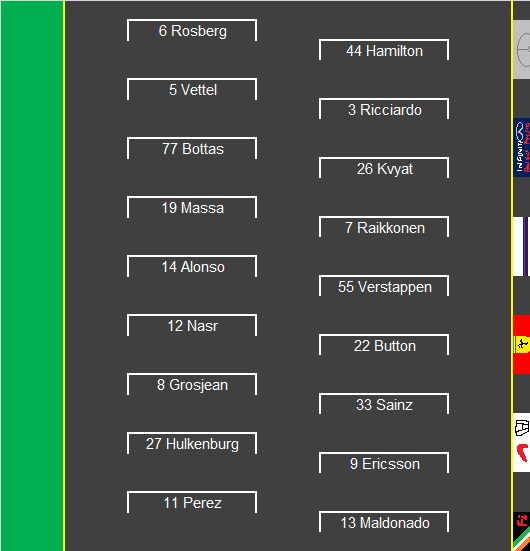 I wouldn't guess any grid until the first day of the third test, and there is a 90% chance of it being wrong by 50%

Contributor
I'm not convinced Mercedes has tested an updated engine yet.

Hamilton mentioned the car feels the same but with more downforce. He didn't mention more power. In fact I haven't heard any Mercedes engined driver mention a power increase. And this is despite the fact that Toto said they will have a lot more power.

My sense is they focused the first test on Aero. Maybe they even deployed the new engine, but knowing it's good they detuned it for the initial tests to focus on reliability and aero.

We will probably see what they are capable of either in the third test or not until Melbourne. This is classic Mercedes - don't turn up the power till you need it.

Also remember these are non homologated engines in the tests. So if Mercedes want's to trick Ferrari into thinking they have a winner and using the maximum credits then this is a smart thing to do. Ferrari will use all their credits now thinking they have a winner, and then Mercedes turns up the power in Melbourne with credits to spare.
Last edited: 7 February 2015
M

Batman said:
Ferrari will use all their credits now thinking they have a winner, and then Mercedes turns up the power in Melbourne with credits to spare.
Click to expand

Do you actually believe that Ferrari are that stupid..? I mean they've only been in Formula One for a mere 64 years..
Last edited: 7 February 2015

Premium Contributor
Anyone who was active in F1 from day 2 probably has brain fade by now; Ferrari may well be suffering from this.
M

Contributor
Not as far as when and where to use you're engine credits are concerned and engine that is down on power does not need a complete rebuild to improve it I think the Ferrari's basic ICE is probably pretty good after all it didn't blow up with the strain that was put on it do it probably can cope with a lot more, it is not unusual for an engine developer to go a bit conservative at the beginning of development.

Mercedes pushed the boat out in the first year but the problem they have is the scientific theory of diminishing returns, which could eat into their credits with little gain...

Valued Member
Well Mephistopheles they were stupid enough to not only let Alonso go, but replace him with some German no hoper!!!

I think it's entirely possible that Ferrari may have indeed turned a corner, mostly on the strength that this is the first James Allison car they'll be running.
You only have to look at his CV and how teams he was involved with in the past fared while he was with them.
In fact it's entirely possible that FA may have run out of patience with Ferrari at precisely the wrong time...
Last edited: 7 February 2015 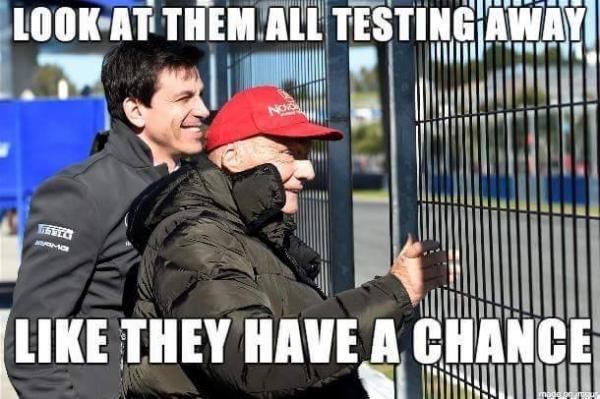 Reminds me of Mutley in the Whacky Races

Contributor
The speed trap figures rather suggest the Merc's are still on top despite overall lap times.

Maybe they were sandbagging.

Staff Member
Premium Contributor
3km difference between the Ferrari and the Sauber is interesting.

I think what's really interesting about those speed traps is the speed full stop. 307k at Jerez?! They never went faster than 280K there even at the height of the unrestricted boost turbo era...

We are in for the highest top speeds ever seen in F1 this year.

Premium Contributor
Well except for the McLaren Honda.
M

Contributor
I think Honda should be given a break, exactly how many laps did Red Bull complete this time last year and they won three races.

It's a new engine in a new car teething problems are to be expected, and all the other teams have a years head start on them.
Last edited: 9 February 2015

Contributor
But none of us know how much downforce any of the cars were using. The speeds may be artificially high because they weren't using enough downforce to be raceworthy.

siffert_fan said:
But none of us know how much downforce any of the cars were using. The speeds may be artificially high because they weren't using enough downforce to be raceworthy.
Click to expand

Given the mercedes teams were mostly focusing on aero that would not make sense.