Contributor
For F1 teams points mean prizes. So in order to have an effective team you want a driver pairing that score similar amounts of points and thus maximising the potential of the machinery. Obviously one driver is always going to outscore the other but a great way to measure the effectiveness of the pairings is to see the percentage the second driver has scored compared with the lead driver.

I have done these before and I realise in practice you can’t take into account the ups and downs of racing so it will always be a little skewed. Theoretically both drivers have the same equipment and should encounter similar mechanical issues, so I do think this is a good way of showing how close to a teammate a driver is.

There is one obvious one in the stats below which is probably not representative and I’m sure you’ll all spot that one.

Numbers have been rounded to one decimal place


Bottas has scored 90.1% of Hamilton’s points

Raikkonen has scored 48.5% of Vettel's points

Verstappen has scored 42.1% of Ricciardo’s points

Ocon has scored 78% of Perez’s points

Kvyat has scored 13.8% of Sainz’s points

Stroll has scored 81.8% of Massa’s points

Palmer has scored 0% of Hulkenberg’s points

Magnussen has scored 61.1% of Grosjean’s points

Ericsson has scored 0% of Wehrlein’s points

Vandorne has scored 0% of Alonso’s points.


So from these stats it appears the Merc team have the most evenly matched pairing, followed by Williams and Force India. I don’t think anyone would be shocked about Force India but Merc and Williams would certainly raise a few eyebrows. Interestingly Bottas 90% score is similar to how Rosberg used to score against Lewis and vice versa, so it would appear Merc have an eye for evenly matched drivers.

If you take away Mclaren and Sauber (its skewed due to both teams having only 1 points finish) then the most telling stats on here are at Renault and Torro Rosso. Neither Palmer or Kvyat are looking good in the slightest.

The one that appears very off is at Red Bull due to Verstappens run of DNFs – however at the end of he day to finish first, first you have to finish. Kimi’s 50% of Vettels points is at it usual level and has been like that for last 2 years.

Anyways thoughts? Its not a full proof system by any means but is interesting to look at.

Contributor
Max's stats are unfair his DFN's have not been his fault.

Staff Member
Premium Contributor
You have to wonder how things would shape up at Mercedes if Bottas were to win again at Silverstone and Hamilton have a DNF?

As we've seen at Merc it's all about the team and a number of people (myself included) assumed that Bottas was going to play a similar role to that played by Kovi at McLaren.

I'm reasonably sure, if Bottas is in with a shout of the title then he will have the backing of the team to go for it.

Elsewhere, given McLaren have only scored 2 points then Vandorne comes off a little unfairly.

Contributor
Palmer would choose the one race to beat Hulkenberg when neither scored. Just his luck, I suppose.

Valued Member
An attempt to adjust for finishes. Verstappen actually scoring less per finish than Ricciardo (still not representative but more so). Mercedes incredibly well-matched as are Williams. Kvyat's awfulness against Sainz absolutely unchanged!

Raikkonen is behind both Red Bulls on points per finish! 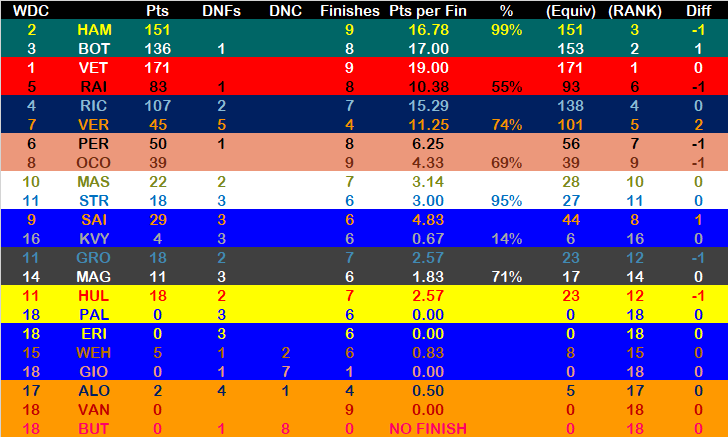