Well I was looking in the drivers section and was surprised not to see a thread on this fellow.

So it's about blooming time this dude had his own thread!

Having driven for 3 teams in his 6 year stay in here are the teams:

At Jordan he didn't have the best of times and a crash with an out of control Heidfeld at Austria was his low point. However, he did end up scoring 2 points 5 behind experienced team-mate Giancarlo Fisichella at the time. He also out qualified Fisi 4 times this season.

In 2003, Sato moved to Japanese Honda powered team BAR as a reserve/test driver. However, at his home race in Suzuka, Sato replaced Jacque Villneuve in the car and partner Jenson Button to make his race debut for the team. In 2004 he was promoted to a full-time racing driver for the team and went on to score 34 points and helped Jenson Button to claim second place in the constructors championship. In 2005 the teams fortunes changed and Sato only managed to score 1 point and was therefore given the sack by the team.

However, fear not the Honda Powered team were determined to find him a seat and they did. Hiring ex formula one driver Aguri Suzuki to run his own team in the sport a new team was born under the name of Super Aguri. Sato had many different team-mates over the first season at SA in the shape and form of Yuji Ide, Franck Montagony and Sakon Yamamoto who he beat quite handsomely. In 2007 he was joined in the team by Brit Anthony Davidson - who it turns out was wanted the season before but BAR wanted to see how SA would go first. In that year the SA car was good enough to claim points in 2 of the races and Sato collected a 8th in Spain and a 6th in Canada and at the end of the year he collected 4 points for the team. However, in 2008 the team was struggling financial and by the Turkish Grand Prix the team had called it a day and by doing so Sato's F1 career as well.

But for me Sato was a character, you either loved him or hated him. But for me I loved him. I'll always remember him for that over take on Fernando Alonso in Canada and for his crash with Schumacher at Spa.

You can now catch Sato in the IRL to keep up with his progress.

However, were you a lover or a hater of Sato?
Click to expand

Watched him while he was at BAR, he was OK and a nice enough chap, but never quite fast enough.

Contributor
His overtake on Alonso in Canada was sweet.

A backmarker car doing that against one of the best cars of that year, around the outside into a "chick-ane" (as Alonso would call it) was sensational.

I didn't mind him, althouh when he was linked with Toro Rosso I wanted him to get it, instead they went with Bourdais who got the sack that season.

Premium Contributor
Here's that overtake on Alonso. What a brilliant move...

Contributor
Now that's a proper overtake, not the sort we get these days which are aided by Kers and DRS

yes indeedy... and performed by a journeyman no less (or more). Those were the days when if the TV director was on the ball or we were track-side we would get the tension and excitement of a chase going on for a load of laps . Buttons hunt down of Vettel in Canada (2010 was it?) Austin were the nearest we have got to that kind of thing in recent years. Now it's a couple of laps and/or a pitstop and bish, the KERS, bosh, the DRS and bish, job done.

I don't miss the processions but a baby went out with the bath water when it was displaced by chucking in DRS and KERS.

Here's another, this time on DC

Fast but patchy but a likeable chap.

And here's to his first IndyCar win on the streets of Long Beach! 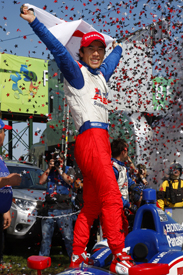 Fast but patchy but a likeable chap.
Click to expand


What's your top 3? does it include a Taki Inoue?

and Mr Sato is in 4th. Congrats to him on the indycar win though.

Contributor
Pipped on the final turn:

The race had a fantastic ending, and I particularly don't watch or like Indy cars, but was cheering on Sato, because he was an ex - F1 driver. I wonder if the drivers in Indy cars, have the same concerns regarding tire degradation, as there is in F1?

Not to the same degree. It is there but it is soooooo much less prevalent and it actually leads to some really hard all out racing like we had at the end there in Brazil. In my mind Sato pulled some nasty blocks, two on Newgarden and one on Hinchcliffe. The one on Hinch didn't really matter but the ones on Newgarden did. But with Indy last year and Long Beach and Brazil this year Sato is becoming one of the most exciting drivers in the series. Very likeable too.

soccerman17 said:
Not to the same degree. It is there but it is soooooo much less prevalent and it actually leads to some really hard all out racing like we had at the end there in Brazil.
Click to expand


I for one would like to see a return to those days, and the end of the days of tires falling of a cliff.

I’ve only just realised that, when Fernando Alonso was busy not winning the Indy 500, Takuma Sato was winning...

Is it just me, but does this suggest that winning the 500 isn’t such a great achievement any more?

Valued Member
Winning the 500 is a great achievement, but it has to be considered on its own terms. The skill set required, and frankly, the bravery, is completely different from F1.

The overall talent level in the Indycar field isn't as high as in F1, obviously, but when was it ever?

the list of drivers is quite good The Artist..... Dixon Power Rahal Rossi Newgarden Rosenqvist Pagenaud & Hunter Reay are all quality drivers. but the 500 can be such a lottery at times because you can be the quickest driver. but a caution can come out at the wrong time & stuff you. you end up back in the midfield

or someone might go early on strategy or someone might try & do massive fuel saving stretch to end. you never know whose in pound seat til 40 laps to go. its a race you cant control because of so many variables
Last edited: 23 August 2020