Valued Member
Jean-Pierre Jabouille entered 55 Grands Prix. He won two, finished fourth once, and only classified as a finisher in 5 other races, never in the points. I suspect he has the highest finish to win ratio

Staff Member
Premium Contributor
Alessandro Nannini only won one race in a career cut short by injuries sustained in a helicopter crash. The race he won was as a result of Senna's disqualification from the 1989 Japanese Grand Prix.

This makes Nannini the only F1 race winner to have never actually won the only race he ever won.

Staff Member
Premium Contributor
Between 1966 and 1979 Jacky Ickx drove for every team that won the world championship during that period. Tyrrell / Matra, Ferrari, Brabham, McLaren and Lotus. He always arrived or left just after or just before they won a world title.

Half of the point scorers at 1996 monaco GP, didnt finish the race

Valued Member
Lela Lombardi is the only woman to finish a GP in a position to score points. However, this was the shortened 1975 Spanish GP at Montjuich Park, and as she finished 6th she only got half a point. So, still to this day, no woman has scored a point in an F1 race.

Staff Member
Premium Contributor
Gilles Villeneuve made his F1 debut alongside Jochen Mass at McLaren in 1977. McLaren opted for Patrick Tambay instead of Villeneuve for 78.

Villeneuve was killed at the 1982 Belgian Grand Prix when he crashed into Jochen Mass. Ferrari opted for Patrick Tambay to replace Villeneuve.

Damon Hill scored 0 points in his first and Brabham's last season in F1.

Both drivers won world titles 5 years after their debut.

Both drivers won world titles for their teams after the tragic deaths of their teammates.

Graham won in Monaco but his career best British GP finish was 2nd.

Damon won in Britain but his career best Monaco finish was 2nd.

Graham started his career with a retirement and finished with a DNQ.

Damon started his career with a DNQ and finished with a retirement.

Contributor
Jaques Villeneuve and Michael Schumacher never shared the podium in the 1997 season.

Contributor
Narain Karthikeyan is the only driver that has ever finished 24th in a race.

Only top 6 scored points in 1989, yet there were 29 drivers who scored at least one point.

If the points had been awarded to top ten with the same results, the number of point-scorers would have still been 29.

Staff Member
Premium Contributor
From Pre-Qualifying for the Spanish GP on the 29th September 1989 to their final entry at the Australian GP on the 31st October 1991, the Coloni formula one team failed to qualify for a staggering 34 consecutive races.

Contributor
The three drivers with Hill as a surname, have all been drivers champion.
Last edited: 9 May 2022

Valued Member
The least successful nation in F1 is Japan, with 22 Japanese drivers having entered F1 races. They have never won a single race and only three of them have finished in a podium place.

Fittipaldi and Wilson are the most common surnames for F1 drivers, with 4 each. And one of the Fittipaldi's has the Christian name Wilson.

Italy next year wont have had world champion for 70 years

Finland population wise are the most successful nation in F1 history

Niki Lauda won 1984 world title, despite never qualifying on the front row all season & lost the qualifying battle to prost 15-1

Staff Member
Premium Contributor
In the days when the points towards the constructors title were only scored by the highest finishing car, Team Lotus achieved a feat that will almost certainly never be equalled.

The team won the 1972 Drivers and Constructors titles with Emerson Fittipaldi scoring every one of his team's points.

His team mate, Australian David Walker remains the only teammate to a world championship winner never to score a point in the same season. His best finish was 9th.

Probably runner up in this category, post 1977 when two cars counted for points, it must be Nelson Piquet's 1981 teammate Hector Rebaque who only managed to finish in the points on four occasions and even failed to qualify the car once. While Derek Daly, Keke Rosberg's 1982 Williams teammate only scored 8 points compared to Rebaque's 11, Daly only arrived at Williams from the 5th race of the season, finished in the points on 5 occasions and qualified the car for every race.

Staff Member
Premium Contributor
I was going to write a post regarding the legendary 1982 F1 Drivers strike but there are so many strange but true facts surrounding that event that it would be a full article. 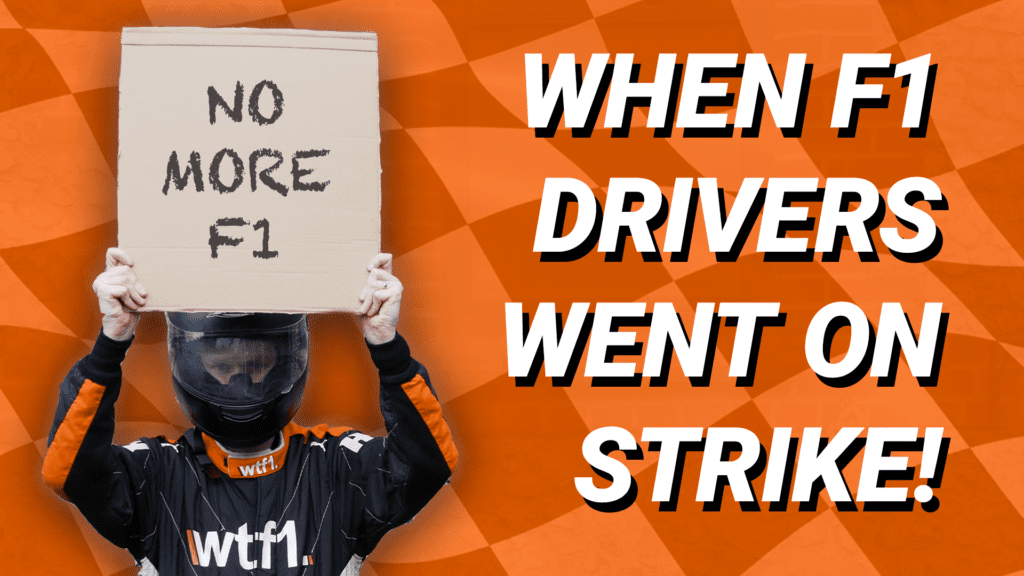 When the 1982 grid discovered that the powers that be were trying to take too much control over the drivers, they hopped on a bus and locked themselves in a local hotel in protest

Staff Member
Premium Contributor
The only time that John Surtees in 1964 and James Hunt in 1976 were at the top of the world championship points standings was crossing the line on the last lap of the last race of the season. Until then, neither had led the standings at any point of the season.

Furthermore, due to only the best 6 results counting towards the title, in actual fact John Surtees is technically the only driver to have won the formula one world championship without ever having led the points standings at all. He finished on 40 points but Graham Hill finished on 41 only to have to drop 2 points to finish on 39 due to the best six races rule.

Valued Member
Of the top ten drivers with the greatest number of race entries, only Lewis Hamilton has started every one - 293 entries, 293 starts.