Contributor
If he doesn’t resign, the incoming FIA president should fire him. Also he should come out and make a public statement of his actions on Sunday.

Staff Member
Premium Contributor
Yeah. He's clearly not up to the job.

Having said that, he won't resign as that would be an admission that what he did was wrong.

I wouldn't be shocked if the new FIA president will also publicly support him for the same reason.

The FIA operates on the following rules structure:

Contributor
Would this change things though (from the BBC article Il_leone shared)?

“This week… the organisation will announce the appointment of Peter Bayer, its secretary general for motorsport, to a newly established position of executive director of F1. In this, he will oversee Masi, Tombazis and technical director Jo Bauer, among other staff.
Being race director was part of Whiting's responsibilities, and as a result people have incorrectly assumed that Masi is his replacement. He's not.”

Valued Member
I think that Masi was put in to a position that he was not equipped to handle. Add in the pressure of having to deal with the team principles directly, and you have an exceedingly difficult environment for anyone, however good, to operate in. The fact that he bowed to the pressure is the issue here.

Does he deserve to be sacked? well, I have made a few monumental **** ups in my career, and have not been fired, so I am going to say no. But should he be allowed to do the same job? absolutely not. Whoever put him where he is, and allowed the team principles to talk directly to him should probably be fired.

ive got say im 50/50. id completely understand if he was sacked & masi couldnt have any complaints. but there was no malice in what he did. but i think the pressure got to him. he panicked he wasnt thinking clearly, he got potential abuse of if the race finished under the safety car. he got potential abuse of cars in between title rivals. but he didnt have time to get everyone round. now thinking about it its obvious the Red flag shouldve fallen to give him thinking time

that is a symptom of he was supposed to be the understudy to Charlie Whiting for years but that tragic event meant he thrust into the limelight & you cant buy experience & like i ask everytime a football manager is on the brink who do we bring into replace him. would masi be better in 2022 knowing what he knows now
Last edited: 14 December 2021

Contributor
Resign and sack are two different things. What are we debating?

This isn't so much a failure of one man, but a structural and governence issue within the FiA, with an added dose of conflict of interest between "the show" and "the rules".

The trouble is, just like UEFA/FiFA, nothing will change, he'll likely be sacked/stand down as a scapegoat and the same incompetent/corrupt merry-go-round will continue.

Premium Contributor
Masi should resign his position of responsibility, but he won’t. I don’t suppose he thinks he’s done anything wrong.

Whilst I agree that Masi has been problematic (at best) over the course of the season, the problems are structural, rather than personnel based.

Contributor
The Artist..... A 60 day ban sounds a tad harsh to me but essentially I think you've nailed it.

PS I don't think Masi should resign but wouldn't be surprised if he did.
Last edited: 14 December 2021 I am surprised whoever was 4th did not complain why he was not allowed to catch up to Sainz! 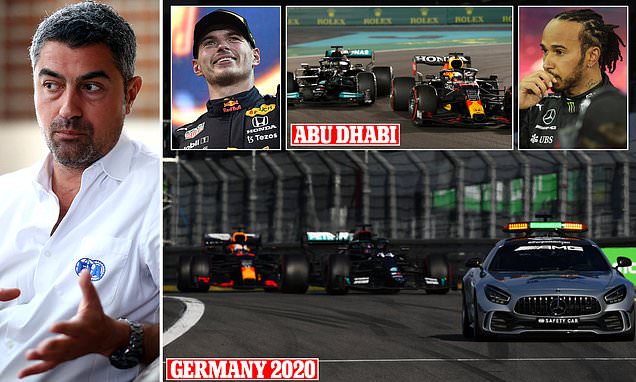 Michael Masi is facing further questions about his decision-making at the Abu Dhabi Grand Prix after it was revealed that the F1 race director broke his own rules to allow a controversial finish.

Il_leone said:
I am surprised whoever was 4th did not complain why he was not allowed to catch up to Sainz!
Click to expand

Because 4th and 5th were Tsunoda and Gasly

Hamberg said:
Would this change things though (from the BBC article Il_leone shared)?

“This week… the organisation will announce the appointment of Peter Bayer, its secretary general for motorsport, to a newly established position of executive director of F1. In this, he will oversee Masi, Tombazis and technical director Jo Bauer, among other staff.
Being race director was part of Whiting's responsibilities, and as a result people have incorrectly assumed that Masi is his replacement. He's not.”
Click to expand

Nope because the new president wants a fresh start

I am hearing Ross Brawn is going and so is Pat Symonds because he is retiring. Masi is waiting for a pay off I presume rather than resigning as he gets nothing

Hamberg said:
Because 4th and 5th were Tsunoda and Gasly
Click to expand

The status of lapped cars is a conundrum if you allow them to unlap then they gain an advantage, especially in the case of an out of position car losing time due to puncture or no fault collision as they are suddenly promoted to a few seconds behind the race leader, should they be moved to the rear of the pack then possibly the also rans that haven't been lapped are now in danger of losing places to quick cars that have been lapped for for various in pit reasons, where if no safety car their position would not have improved though the gap may have closed.
The real problem is the safety car, an American import designed for oval circuits, the virtual safety car is the way to go with various speed percentages, given the now large run off areas a VSC circuit could be introduced to avoid the incident area, though this may be a problem for some street circuits but not unsurmountable. There is considerable amount of electronics and software that can be employed to overcome the safety car requirement and keep everyone safe.
The race director should be in a soundproof box that can only transmit instructions but able to consult the stewards, stewards can only judge on whether a rule has been broken, not interpret the rules. i.e an undertake must be completed without forcing the overtaken car to take to the curb, similarly an outside overtake must be allowed without the overtaken car leaving less than half a cars width of track limits, any collisions the are judged on the car positions at the first instant of the collision, the overtaking car must have attained an overlap of at least a half cars length before either of the cars turn in to claim the corner .
Masi has placed himself in an untenable position having lost the confidence of a majority of drivers and team principals at various stages of season, would suggest he claims ill health and retires gracefully

The Artist..... said:
Rather than allow lapped cars to pass, they should be moved to the back of the train by driving through the pitlane. This would have the benefit of having drivers (on the lead lap) in their position order, without spending 3 laps waiting for first the cars to all pass, then to get past the safety car line, and then the extra lap.
Click to expand

this has been Brundles biggest issue i remember at imola this year. but apparently they cant just do computer magic & add a lap. they have physically do the lap


Hamberg said:
Because 4th and 5th were Tsunoda and Gasly
Click to expand

4th was bottas at the restart. until bottas carried being useless right to bitter end
Last edited: 14 December 2021

He should be fired and lose all pay and benefits.

Now Brawn has come out and said Team Principals cannot speak to Race Director from next season so a reprive for Masi?

Pre-Season Where should replace Shanghai?
2 3

Poll Should Verstappen have got a penalty?
2