Now here's a driver who polarises opinion. A really nice bloke or a bitter man who should have grown a pair at Ferrari instead of bitching about it after he left. The most experienced driver ever in F1 but now, perhaps, past his sell by date? A brilliant car sorter who helped Jenson Button realise his title ambitions at Brawn or someone who failed to take an opportunity when it came his way?

Everyone's favourite No.2? The best choice Williams could could have made to lead there team or would they be better off without him?
Click to expand

Contributor
Rubens - talented driver (monaco 97, france 99, germany 00, britain 03), nice bloke, desperately unlucky (Interlagos), should have stood up for himself at Ferrari (I'm sure plenty of other teams would have taken him on if he got sacked).

I met Rubens in a Montreal hotel elevator just over a month after Ayrton was killed. He was with Christian Fittipaldi. We chatted about racing in the hotel lobby for a few minutes and then I wished him good luck. He was with Jordan back then.

I have nothing bad to say about him.

There was a time when I thought he'd be a World Champion...then he joined Ferrari and the die was cast in Austria in 2001 with Austria 2002 only confirming it.

At least he has bags of money and lots of good Formula One racing memories that not a ton of people have in life.

Hopefully he'll retire from F1 fully intact and go back to Brazil a fat happy man surrounded by his loving family.

I'm sure he'll be the first to tell you those last 2 numbers aren't high enough given his starts...and, in all good conscience, I can't rate him in the same bracket as either Ronnie or Jonesy. No way.

Valued Member
None of Schumacher's team mates got as close to him as Rubens did...not first time around, at least.

Very good driver, by my reckoning, and a super bloke.

Valued Member
As I've said, I really got interested in Formula One in 1999, and I can assure you that the white Stewart-Ford piloted brilliantly by Rubens Barrichello was part of the reason the interest persevered.

Hockenheim in 2000 was an astonishing drive, one of the best by anyone.

He never won a race in a year when his team-mate did not win a title. I think he is more of an excellent developer of a car than he is a racer.

However, there are few drivers on the grid I'd be happier to see win again.

By the way, the company he shares as a triple champion at Monza is astounding:

Technical driver, but in my opinion adds feedback for Williams which they need right now as there Windtunnel is not working well and there are changes in the Aero Department.

Got 3 more seasons in him in my opinion.

Spa, Suzuka, Monaco (and the old Nurburgring)...those are the ones which separate the great from the good.

Again, I have nothing negative to say about Rubens...he'll have good memories of Monza which, in the end, is F1 Holy Gound (among a few other spots).

Rubens was a good-to-very-good driver. It's a shame that he signed one too many Ferrari contracts but i'm sure there weren't any complaints from his bank manager, accountant or his agent!

Gert said:
Got 3 more seasons in him in my opinion.
Click to expand

You really think so?

No one's rating Maldonado and yet Rubens has had a bitch of a time having the measure of his fellow South American this year.

RayInTorontoCanada said:
You really think so?

No one's rating Maldonado and yet Rubens has had a bitch of a time having the measure of his fellow South American this year.

Yeah until Williams sort out there Downforce problems they will rely on his knowledge and experience.

Yes, I would agree, but its something for his grandchildren.

teabagyokel said:
Yes, I would agree, but its something for his grandchildren.
Click to expand

Perhaps they'll have added back that old death trap - the Indy Oval - by then!!!???

Gert said:
Yeah until Williams sort out there Downforce problems they will rely on his knowledge and experience.
Click to expand

Rely on him to do what? Hold off Lotus GP from pipping them to a hideous 10th in the Constructors?
G

RayInTorontoCanada said:
Rely on him to do what? Hold off Lotus GP from pipping them to a hideous 10th in the Constructors?
Click to expand

He will give them good feedback and knowledge at this time.

RayInTorontoCanada said:
Rely on him to do what? Hold off Lotus GP from pipping them to a hideous 10th in the Constructors?
Click to expand

They'll need 5 points to do so, so it seems unlikely.

Contributor
I love him, great driver and a politically shrewd operator. To spend so long in F1 is a sure signal of the respect shown to his skills by his employers. Almost time for a dignified exit though.

Contributor
I used to like him in 1999 when he was at Stewart, and his drive in Hockenheim, as a Ferrari with Schumacher out and him starting 18th boy did that make me happy...

But I have not liked him for a while, I don't know when, but he has came across as a whiner, always complaining, first at Ferrari then Brawn now at Williams...in 2009, I think he was the better driver out of him and Button, if he had the car he wanted at the start I think he would have bet him.

But I think he has dragged out his career, the 2009 season might have given him motivation to go on, but second half of 2010 and onwards he has looked like a "has-been".

I don't remember Massa complaining when he got squeezed right up the pitwall in Fuji 2008 unlike Barrichello. Both are very similar incidents...and then claiming that Schumacher will go into hellfire just for that, who is he to say?

Another thing....that podium dance he does, come on! Ok the first time but don't over do it, plus you are 40 odd not a kid so stop acting like one!

The drive in Hockenheim 2000 though will for me, go down as a great one for that decade.

Contributor
I think his "podium dance" is a throwback to an incident when he slipped and nearly fell over rather than actually being a dance.
I'm well over 40 and I look a twat on a daily basis.

Valued Member
I've always thought of Rubens as one of the happier, if not happiest driver on the grid. He rarely isn't smiling when being interviewed (unless Ross Brawn has made him make an extra pit stop he didn't need).

Brawn was a double-edged sword for Rubens.

On the one hand, he provided Rubens with a car capable of winning multiple Grands Prix...on the other hand, he had higher-rated/faster-on-average drivers in the other car.

It's been said Rubens got closest to Schumacher...but I think Martin Brundle would like to debate that point.

RayInTorontoCanada said:
It's been said Rubens got closest to Schumacher...but I think Martin Brundle would like to debate that point.
Click to expand

I'm sure he would, but I don't think he has a leg to stand on myself.

Qualifying isn't the whole story of course, but for what it's worth here are Michael's team mates and his qualifying margins: 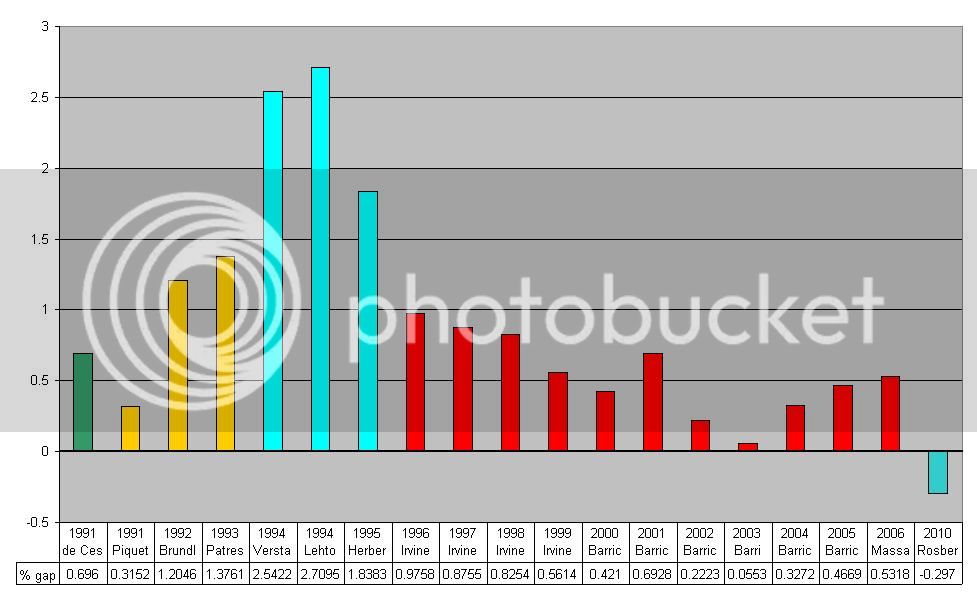