So Roberto Mehri looks set to make his F1 debut for Caterham in the 2014 season, if not at Monza at least at some point of the season. Merhi's sudden step up to F1 is a dramatic change of fortunes for a driver who had basically dropped out of single seater racing two years prior to 2014.

At 18 Merhi started racing in the F3 Euroseries and whilst his first two seasons were consistant rather than spectacular he certainly showed he had a sensible head on his shoulders. He jumped into a GP3 seat near the end of the 2010 season and scored a double podium on his first weekend. It was all a pre-cursor to his championship year in F3 Euro in 2011 where he streaked away from the rest of the field. Merhi had one retirement all season with only one 5th place blotting a perfect record of top 4 finishes. When you think that there were 27 races in the F3 Euro that year then once again consistancy is the word you have to use.

Unfortunately Merhi did not have a major amount of funding and found no seat in single seater racing in 2012 so he joined the Merc junior team in DTM for two years. I don't really follow DTM so I can't really comment on his performance there but his results don't look amazing.

It was a bit of a shock in 2014 when it was announced that Mehri would be driving in the WSR. The commentators seemed very confused. Despite being out of single seater racing for 2 years he scored a 2nd place on his first race out (at Monza by the way) and, whilst it was obvious he was getting used to the machinary for the few rounds after, his form gradually started to return to the point where he has won 2 out of the last 3 races and finished 2nd in the other one. Merhi is the only driver to really have given Sainz Jr a problem in a straight fight this year in WSR and had just pulled himself into a position to challenge him for the title.

Merhi's move back into single seater racing was obviously very calculated after picking up his Russian backers. He even raced at British F3 round at Spa during the WSR break to 'keep him sharp' Merhi comes into Caterham with a massive amount of race experience and experience at jumping into different types of cars and learning them quickly. He also has a level head and a massive reputation for consistancy. All of these can only be good things when coming into F1 but ultimately whilst his pedigree is good (think above Chilton and Ericsson but below Bianchi) its not spectacular and unfortunately when coming into a back end team mid-season only spectacular will stop you picking up a reputation of 'pay-driver' or 'mediocre'.

He certainly seems a lovely guy who genuinally loves racing so I hope he does well and I expect him to get the best of Ericsson. However when all you can say about a team bringing in a driver is 'they could have picked worse' you know you're not expecting a world beater.
Last edited: 3 September 2014
Click to expand

Contributor
Maybe should do this an update but it has been decided Merhi will not make his race debut at Monza due to the FIA not granting him a super licence. He will get a run in FO1 though with a view to driving in Singapore.

Does anyone else find the FIA's decision not to grant Merhi a super licence a little odd?

Merhi was actually granted a super licence in 2011 but apparently its expired in the 2 years he's been racing in DTM. He has been racing single seaters all season and has 7 years experience of racing at support levels. Now I can understand the FIA being cautious on granting super licences but why are they doing it in this case but not others? I'm sure drivers with far less experience have been granted them.

Odd. Lotterer raced laat week and has been in a single seater car in years!
M

Contributor
Ah sorry I didn't recognize the size of his wad.....

Contributor
He's Fernando Alonso without the skill and manipulation.

Contributor
So Merhi goes into P1 at Monza having not been in an F1 car before and with no super licence......and still clocks 2 tenths faster than Marcus Ericsson!

Its a practice session so we shouldn't read too much into it but it doesn't reflect well on Ericsson does it?

Premium Contributor
He certainly looks very Spanish ( yes I know, why wouldn't he, he is Spanish), and he looks moody, but probably isn't. Although he might be at the moment as he hasn't been granted his super licence, for some very strange FIA reason. Yes, I do find it most peculiar RasputinLives.

Premium Contributor
RasputinLives explained it a few posts up.

Contributor
So the same guy who the FIA wouldn't let renew his super licence (they gave a 16 year old one though) just won a WSR 3.5 race in Budapest in the wet by a full 30 seconds which is almost unheard of in a spec series!

Contributor
And now, according to Autosport, the FIA will be reviewing their criteria for issuing Superlicences!
M

Contributor
Merhi doesn't look like he's going to get that shot in F1 in 2014 after all but he is in with a shot at the WSR title.

Maybe move this thread over to the general motorsports drivers section Brogan?

Contributor
So Mehri missed out on runner up spot in WSR and with Caterham going up in smoke his F1 shot has had it too.

Sportscars probably awaits for him. He is a decent talent as well so once again F1 will miss out.

Contributor
10 Brogans on Merhi becoming the other Manor driver (if they make the gird).

Looked him up and this came up ... 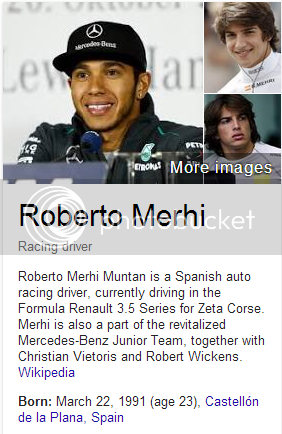 Contributor
Thants him in disguise obviously!

I've been signed as an F1 driver now! Can my thread go in the F1 drivers section?