It's going to be a long, slow day at work so here's a profile of Rene Arnoux, one of the most difficult drivers to pigeon hole. On occasions blinding quick, on other occasions a mobile road block who made Jarno Trulli look like a rank amateur. He was also very well balanced with a chip on both shoulders.

I first saw Rene racing in 1980 when at the all French Renault team partnered with Jean Pierre Jabouille. There's an interesting comment in his Grandprix.com entry:

He was however hired by Renault Sport for 1979 as partner to Jabouille. As soon as he had learned the ropes and Jabouille had set up the cars for him, Arnoux became a strong force winning his first GPs in Brazil and South Africa and finishing sixth in the World Championship.
Click to expand

I think this explains the enigma that is Rene Arnoux, not very technically gifted but a real balls out racing driver as this video of the closing laps of the 1979 French GP demonstrates perfectly.


Jean Pierre Jabouille won Renault's first ever Grand Prix at that race and the first for a 1.5 litre turbo car. Anyone remember that?

As ever with F1 drivers Arnoux started in karts and was picked up by the Elf driver programme which gave us talent such as Alain Prost, Didier Pironi and Patrick Tambay. This helped Arnoux win the Formula Renault title in 1973 before he moved on to F2 with the Martini team (Tico Martini BTW, nothing to do with the drinks company) in 1976 and was runner up to future team mate Jabouille that year. In 1977 he won the F2 title beating, amongst other, future F1 drivers Eddie Cheever and Didier Pironi.

Martini decided to enter F1 in 1978 but this was the early years of ground effect and the Martini MK23 was a more traditional car. Rene managed a ninth pace in Belgium and Austria before seeing the season out at Surtees. 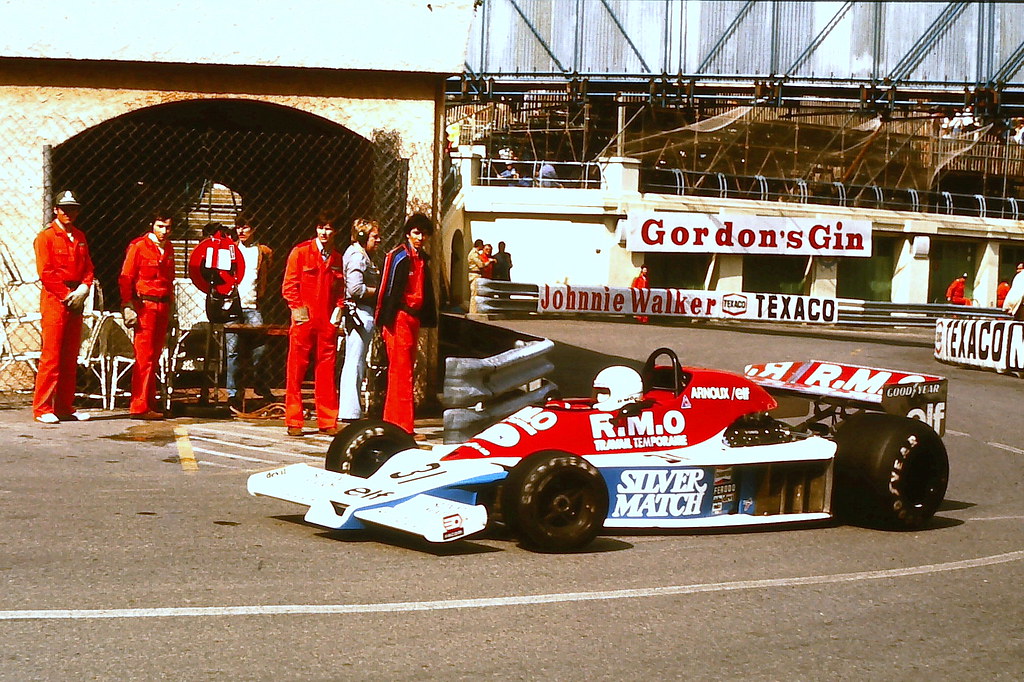 In 1979 Renault expanded to a two car team and, obviously, needed another French driver to partner Jabouille. Reliability was the main problem for these powerful turbo engines and between them, Jabouille and Arnoux wracked up 19 DNF's out of 28 starts. However, this was the break though year with Jabouille's win in France. For 1980 Jabouille suffered the bulk of the reliability problems only finishing twice all season, although one of those finishes was in first place in Austria. As Jabouille's car consumed itself Arnoux was there to pick up the pieces and took win in South Africa and Brazil, eventually finishing 6th in the Drivers Championship.

For 1981 Rene was partnered with Alain Prost, which must have been the shortest driver line up in F1. Prost added a different dimension to the pressure Arnoux was under and in 1981 he failed to win a race whilst Prost won three and was challenging for the title up until the last couple of races of the season.

The bizarre season that was 1982 saw Arnoux back on the top step of the podium, winning the French GP at Paul Ricard. However it was the beginning of the end of his time at Renault as he defied team orders to take the win ahead of Prost. Rene also won in Italy, just after it was announced he would be driving for Ferrari in 1983. Just to seal the destruction of his relationship with Renault Arnoux gave the winners trophy to the crowd.

Partnered with Patrick Tambay, Arnoux thrived in his first season at Ferrari. He won three races and was third in the drivers championship. Ferrari also took the Constructors title that year ahead of Renault. 1984 proved very different as the arrival of Michele Alboreto put Arnoux under pressure and his performances became very inconsistent. Ferrari dropped Arnoux after only one race in 1985 and there are various stories as to the reason why, most of which are libelous so I won't go into detail.

For 1986 Rene was back in F1 at Ligier, well was there another French team he could drive for? The Ligier wasn't competitive but 1987 looked promising with Ligier having negotiated exclusive use of the new 4 cylinder Alfa Romeo turbo engine. In pre-season testing Arnoux's compared the engine to used food (I'm presuming this to mean the waste product food usually becomes) and FIAT took the opportunity to pull the plug on the project leaving Ligier to bolt on a Megatron engine creating a car which, by all accounts, was almost undriveable.

Arnoux continued in F1 into the post turbo era giving rise to one of the most memorable pieces of sports commentary ever. As Rene circulated round Monaco, getting in everyone's way, Murray Walker tried to explain his lack of pace. Murray commented that Arnoux had told him that he was unable to go fast due to the lack of power from the normally aspirated engines to which James Hunt replied "And all I can say to that is bullshit" which left Murray blustering and quickly trying to change the subject.

The high point in the latter years of Arnoux's career was a fifth place in Canada in 1989 but the season was peppered with DNQ's and at the end of the season Rene called it a day. I recall reading somewhere that at the driving briefing at his final race Arnoux gave each driver a present of a leather wallet, perhaps as compensation for problems he caused them on the track. I'm guessing Alain Prost probably threw his straight in the bin.

After F1 Arnoux set up the DAMS team with Jean Pierre Droit (Droit Arnoux Motor Sport). Ironically DAMS are now the entrant for Nicolas Prost in Formula E although the Arnoux name has been dropped. Rene now runs four kart tracks in France and occasionally turns up at events such as the Formula Renault races to show off the historic Renault F1 turbo cars.

Rene took 7 wins throughout his career which puts him above people such as 1982 World Champion Keke Rosberg and 1964 World Champion John Surtees. Always fun to watch, very unpredictable and a Grand Prix winner.

From what I remember reading one of the major setbacks to Arnoux'd driving was that he seemed to have have been one of the hardest drivers on his rear-tires. It was a source of frustration within Ferrari. He'd be too aggressive on his tyres at the beginning of races and run out of tyres before his scheduled pit-stops.

Maybe that's what cost his career the chance to progress onto a higher, regular championship-contending plane?.... Especially as F1 in the 1983-84 period began turning into the era of super-powerful engines, because tyre-wear at that time was dictated by repeated wheelspin caused by the formidable power-to-weight ratio of cars in the 1984-86 period.

The 1986 season, before Laffite's career-ending crash halfway through the season, was quite telling from that point of view. Arnoux would qualify in front of Jacques and be ahead at the beginning of races but almost invariably the 43 year-old Jacques would finish in front (when they finished).
Last edited: 15 January 2015

I have always considered Montoya the Arnoux of the 2000s (sorry if this is heretic for some folks). Blindingly fast but inconsistent and with a chip on his shoulder. Fun to watch nevertheless.

Contributor
He looks just like the plumber who modified my bathroom. Only of course he would look older these days.
M

Contributor
He was French..

Contributor
My only memory of Rene Arnoux was from the 1989 British GP at Silverstone. My 15 year old self and my dad went down for my first ever Grand Prix and we ended up camping next to a group of lads from Leeds if I remember right (very much not France). For 3 days they would often break into song, normally after much beers, and 'sing'

I never really watched F1 seriously when Rene was worth watching in the early eighties and didn't really know who he was other than some back marker who was a bit rubbish by the time I started watching in the late eighties. I found this fanatical support rather perplexing and amusing at the time.

These were the years I started watching F1, you can see why I was confused by anyone supporting him.

Contributor
Seems obvious to me as a Leodiensian. It is usual for us to support the underdog who competes no matter the odds against them.

Arnoux apart from his famous battle with Villeneuve .. he is noted for ignoring team orders which denied Prost the home win in 1982 . Prost moaned about it because it cost him valuable points in the championship whilst Arnoux lapped in the moment that it was a home win which lead to him leaving the Renault team.