Contributor
I started this off in the Jerez testing thread and I'm enough of a closet spreadsheet freak to carry it on I think, so here we go!

We all know that it's very difficult/impossible to figure out what's going on during testing, but it's fun to try so I have developed a simple points system to let us see how the teams and drivers are going on. The system is as follows:
I think that should be enough to explain it, so on to the results! 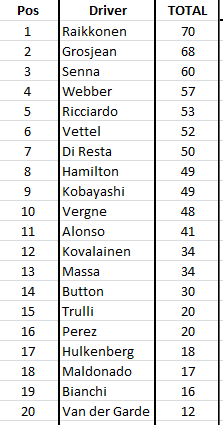 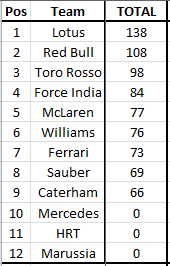 These two tables show the full break down in points etc.:
Drivers:

So Lotus run away with round 1, with Raikkonen and Grosjean securing a one-two! Williams will be happy to see that Senna rounds off the podium thanks to the mammoth 125 laps he completed in both the days he was driving. Red Bull, who would seem to have had a fairly quiet test, are lurking not too far behind Lotus with solid times and laps completed on most days, and the likes of Toro Rosso and Force India also had very successful outings in their new cars.

Down at the bottom, Mercedes, HRT and Marussia are already lagging behind after choosing not to run their new cars at this test. In the drivers table you tend to find the drivers who ran in the first two days near the bottom, although Hulkenberg was hampered by Bianchi's early accident on Day 3.
I'm quite intrigued to see who comes out on top and whether it will have any relevance whatsoever to the running order in Melbourne!

Next Round - Barcelona Part 1

Contributor
Some information in the detailed constructors table is incorrect. This is the correct version:

Nice idea, but one irony really hit me this week was the reminder that Williams was fastest in test 1 last year and we all know where they ended up... Now, can your scientific approach model that...?

Contributor
Probably not! To find out I'd need all the information from all the tests last year... and a load more time than I have at the minute. I can't remember the details but if that Williams lap was just out of the blue and they spent the rest of the tests with slow times and completing few laps then this system could smell a rat.

My thoughts were that at the end what you could probably do is split the teams in to tiers, e.g. Tier 1: Red Bull, McLaren, Ferrari, Tier 2: Mercedes, Lotus, Tier 3: Midfield, Tier 4: Marussia, HRT. Then, if you sort the teams in each tier by the number of testing points they get you might end up with some sort of vague idea about how things will turn out in Australia? Using this system the order would currently be:
1. Red Bull
2. McLaren
3. Ferrari
4. Lotus
5. Mercedes
6. Toro Rosso
7. Force India
8. Williams
9. Sauber
10. Caterham
11=. HRT/Marussia

Contributor
Well, Lotus, Mercedes, Ferrari and Red Bull are trying their best to screw up the testing championship. I'll have to think of some solutions, I might shift the times/laps set by Ferrari/Red Bull by a day so they line up with the other teams for example. Anyway, I should be posting the Barcelona update sometime today or tomorrow. 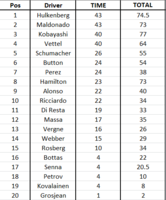 So, Kobayashi takes the Barcelona victory in the drivers championship, closely followed by Hulkenberg, Maldonado and Hamilton. In the constructors championship McLaren take the victory by 11.5 points, with Williams and Sauber only separated by half a point in the remaining podium places. Down the other end of the table, Lotus obviously saw a complete reversal of fortunes and the prospects of Caterham making much progress in to the midfield this year currently seem quite slim. 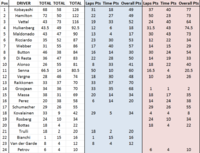 McLaren and Red Bull have risen to the top, then, with McLaren sitting 5 points ahead at the top. McLaren have completed more laps than Red Bull but Red Bull have the advantage in the fastest lap times they've set. Ferrari are quite a long way behind them, in fact behind every other team except Caterham that has run their 2012 car at all the tests so far. It is Kobayashi, though, that has stolen the lead of the drivers standings after the fall of the Lotus drivers, who nevertheless are ahead of Massa's Ferrari as well as Perez and Kovalainen, despite not getting any points this week (well, Grosjean got 2...)

Small request - have you got an overview of the best laptimes by driver in all 4 days the Barcelona test? Your tables are excellent, but the driver roundup doesn't have best times

Thank you, great data by the way

Contributor
I've been busy so not had the chance to upload the results from the last test yet, but here they are for anyone who is still interested. I think it's probably been a bit of a pointless exercise on the whole but maybe after Australia we can see whether we learnt anything.

Results From the Second Barcelona Test

So, Lotus jump straight back to the top after missing the first test at Barcelona. They certainly seem to have a quick car but are they just looking for headlines? Ferrari/Alonso also got a very good points haul, but this may reflect the fact that the likes of McLaren and Red Bull were trying significant update packages whereas Ferrari were still trying to understand the car. The wooden spoons go to Williams and Maldonado, but Red Bull are only just in front after suffering reliability problems.

Somewhat surprisingly, Sauber take the constructors testing championship and Kobayashi wins the drivers testing championship. People in the know have said that they are looking good, but I think on the whole they have slipped under the radar. When you look at the times and laps points individually Red Bull and McLaren, and specifically Vettel and Hamilton, begin to emerge above the rest. In the big three teams (McLaren, Red Bull, Ferrari) one of the things that did surprise me is the separation between team mates, with big gaps between Hamilton and Button, Alonso and Massa and Vettel and Webber. It's not obvious that this should occur in testing...

If we look down at the bottom of the table we again find all of the new teams. I know people are making positive noised about Caterham but if I take one thing from what I've done here it's that I'm not convinced they've made a big step up in to the midfield.

I have one more set of tables that I will post next, which adjust the points tallies for the teams based on the number of testing days completed in the 2012 car.


The following tables show the points obtained per day in which a team completed a lap in their 2012 car. 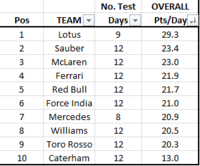 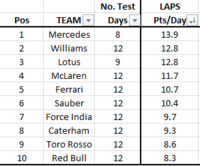 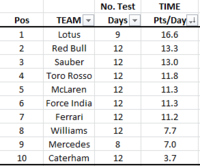 This makes the strong performance of Lotus obvious, they are well ahead of the rest when you look at the results in this way. Mercedes move from 9th in the normal table to 7th here, but they do top the laps table, suggesting that they have a reliable car and weren't going for table topping lap times.

If we are to believe these results, taking in to account the likely performance level of the teams, then I would make some predictions for Australia along the lines of these:
Now we only have a week to wait to see if any of these things will be true!

Contributor
After two races (albeit Malaysia being a special case) I think it's fair to say that the predictions above are actually pretty decent. Red Bull definitely don't have the strongest single lap pace, but apart from that I think there's an element of truth to all the other predictions.

Maybe it wasn't a completely pointless exercise after all...