Merc have kitted out both cars with all new units ... Force India and McLaren the same but for the Energy Store and Control Electronics ... 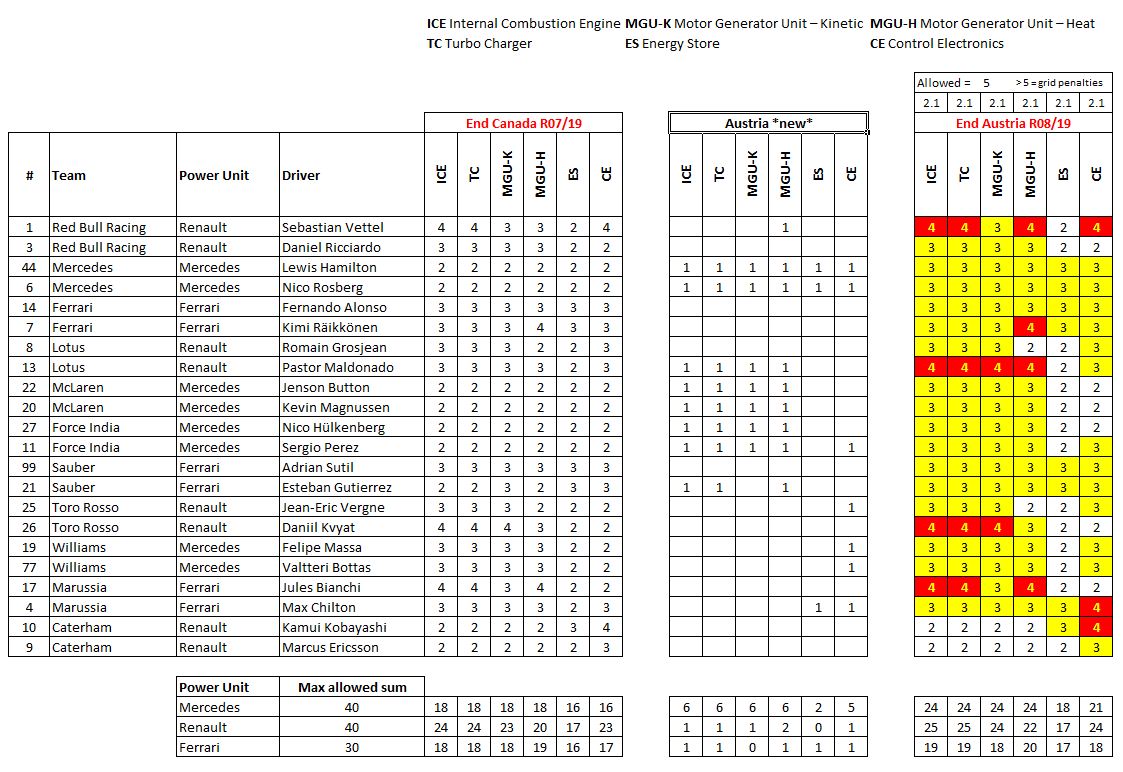 Supporter
Pretty much a no-brainer for RBR to finally call Seb in. No need to put undue stress on parts they will be asking a lot from.

And as if Lotus needed more to worry about with Maldonado...

KekeTheKing said:
Pretty much a no-brainer for RBR to finally call Seb in. No need to put undue stress on parts they will be asking a lot from.

And as if Lotus needed more to worry about with Maldonado...
Click to expand


With about 5 rounds to go, Lotus will be starting Maldonado from the pit lane each event ... why not just save Charlie and co. the time and effort ....

Contributor
Vettel's position is just as bad as Maldonado's. The restrictions on engine development and reliability during the first season after a major regulations change are farcical in my opinion. It's very likely that someone will have used their whole allocation of units of one sort or another with only just over half the season gone.

Valued Member
At least Seb can take comfort in having as many Energy Store units left as everyone else.

Supporter
The tables are going to look very interesting heading to Italy. I guess Vettel is looking at a Grid Penalty there already. This could become an almost comical situation come the finale.

Contributor
Updated table for Belgium, Interesting to see that Hamilton is almost equal to Rosberg, I'm sure he lost a full set of of engine components in his qualifying fire.

Supporter
So in the last 3 Grand Prix Vettel has only had to use a single MGU-K unit? I know he's had to move onto the 5th (at least) of several components in Belgium. I must say this system is extraordinarily complicated.

Contributor
Only one new unit KekeTheKing , he can reuse old units.

I don't really see why any team would choose to do this but is there a loop hole in the regulations? I see Lotterer has been assigned the units that Kobayashi used, which makes sense of course. However, what would happen if they replace Ericsson with Kobayashi in the next race? Would Kobayashi then be assigned the units used by Ericsson?

By doing this you could potentially double the units that your number one driver has to use. For example, say I have a team of Alonso and Chilton with Ericsson as reserve driver. I only care about winning the WDC so I focus all my attention on Alonso and only let Chilton use one set of units, running at half power, for the first half of the season. At the mid-point of the season I mysteriously swap out Alonso for Ericcson for one race. At the next race I bring Alonso back to replace Chilton. If Alonso is now assigned Chilton's old quota of units, he now has 4 fresh power trains to use for the rest of the season.

Of course Alonso has to sacrifice a potential 25 points from one race in this scenario, but it gives him 9 fresh units of each type to use rather than 5. I know this is a stupid idea but are there any regulations in place for preventing it?
Last edited: 23 August 2014

Good questions but I assume that the units in question are assigned to the chassis and that said chassis is assigned to the driver who normally uses that car. The reserve driver may be required to driver either of the two cars but I don't think drivers one and two are allowed to swap cars. Something to check in the reg's, methinks.

Contributor
Bit late but I made a table of the status at Monza: 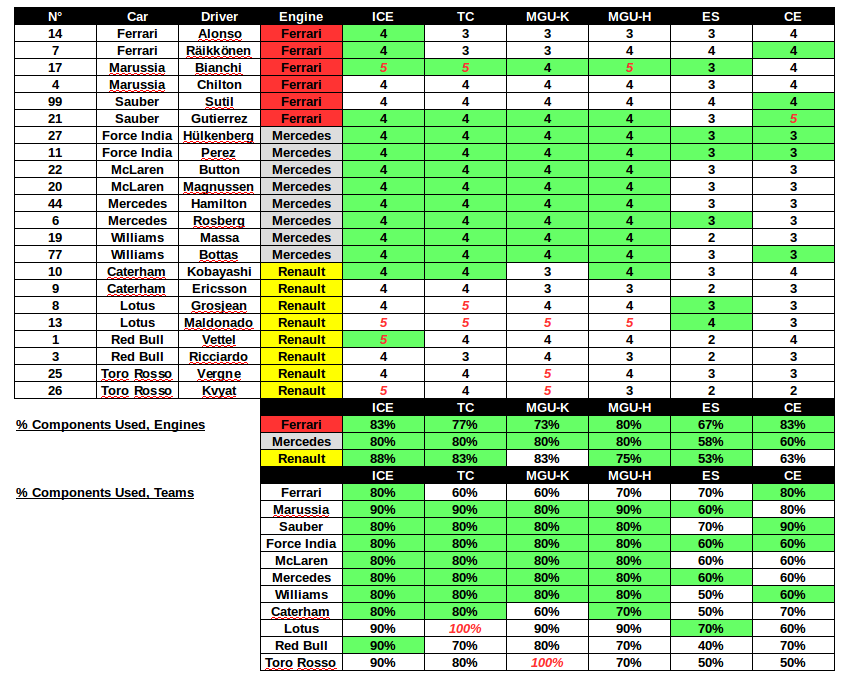 The cells highlighted the nasty green colour are the ones that have changed since Belgium. It seems pretty clear that Renault are having to ration their remaining units to me, or maybe they just didn't fancy their chances at Spa. Renault teams used a total of 6 new units of any sort, Ferrari 14 (with two less cars) and Mercedes a whopping 38!
Last edited: 21 September 2014

Contributor
Update for the status prior to the Singapore race weekend (I'll try to keep doing these as we're at the stage of the season where it can really have an impact). As we already knew, Kvyat became the first driver to take a penalty for using more than 5 elements by having to use a sixth ICE at Monza. Perhaps wanting to maximise results at their home grand prix, all but one of the Ferrari powered drivers used at least 3 new elements during the Monza weekend. This leaves the Ferrari guys very light on ICE, TC, MGU-H and CE units for the rest of the season... On the other hand, the Mercedes powered teams introduced almost no new components having used a lot of fresh units at Spa. It's also very telling that not a single Mercedes powered driver had used all 5 of their units of any type going in to the Singapore weekend. 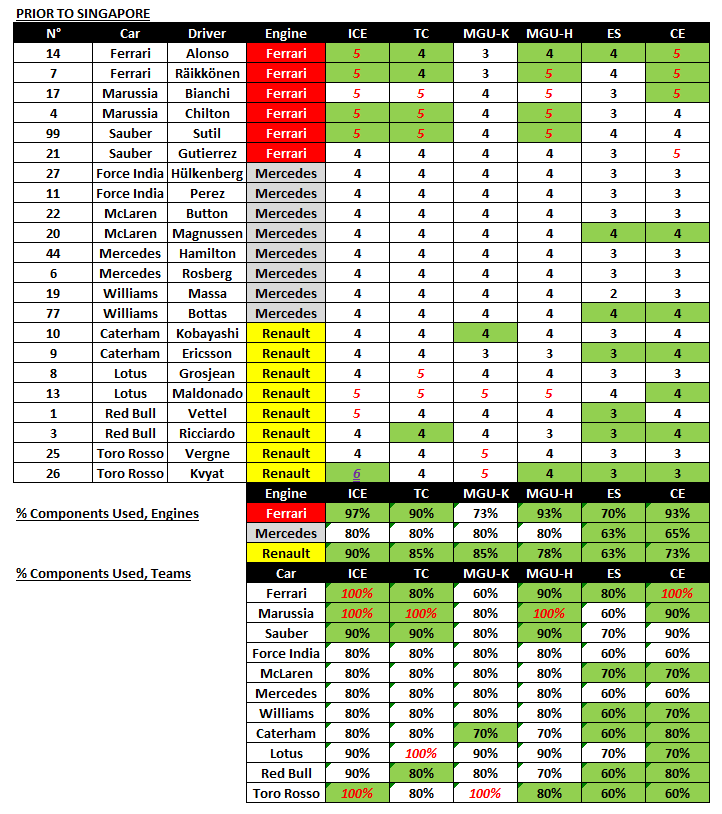 Remember the information is relevant to before the start of the Singapore weekend, so this is the status at the end of Monza. Cells highlighted green indicate where new units were used during the Monza weekend.

Contributor
I'm not sure whether anyone else is actually interested in these and it probably belongs on the Statistics forum but anyway, here is the update going in to the Suzuka weekend: 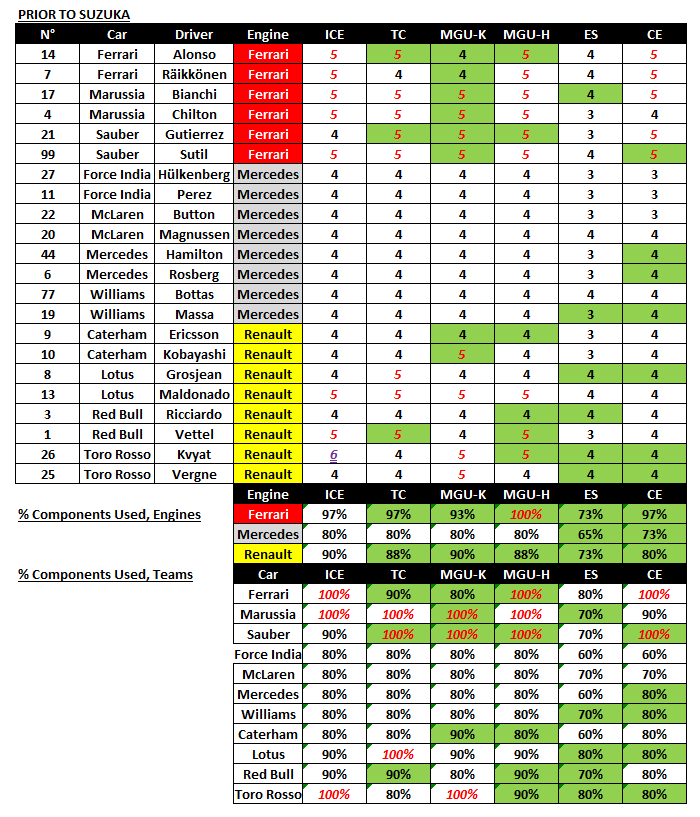 Every single Ferrari powered driver has now used all his allocation of MGU-H units, so you'd think we'd see at least one penalty relating to that in the remaining races. Mercedes are still well ahead in the reliability race - not a single Mercedes powered driver has used a 5th unit of any type yet.

Green boxes are what's changed since before the Singapore weekend, remember.

Contributor
The Mercedes teams have decided to bring in most of their 5th units for Russia, which is pretty much bang on target for what you'd expect with 4 races left. Vergne has managed to get through two engines since/during Suzuka and him and Maldonado join Kvyat as the three drivers so far who have had to use a 6th component. 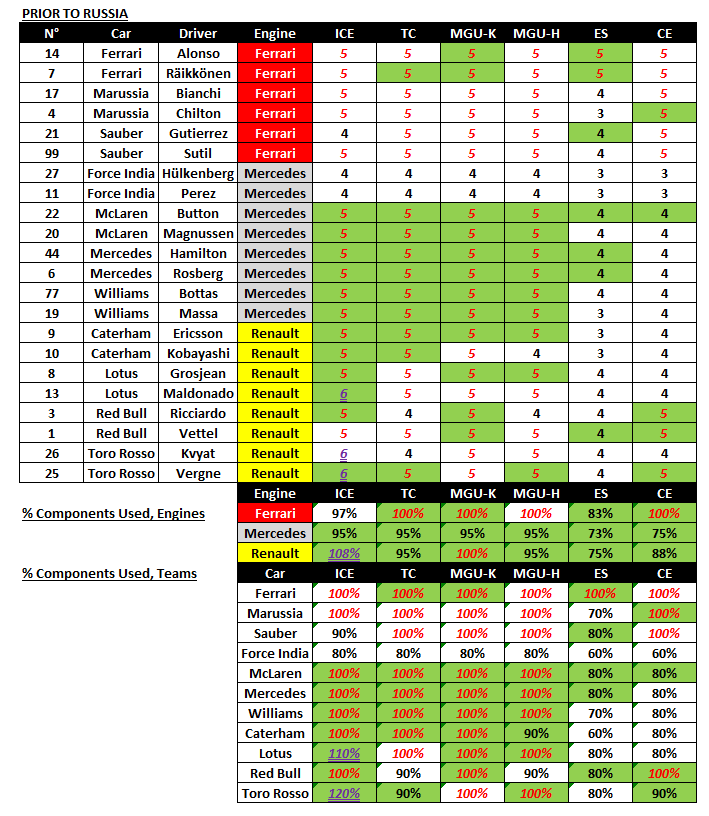 Contributor
Very few new units used over the course of the Sochi weekend / installed for Friday practice in Austin (although we know a clean sweep for Vettel is coming)... mainly because a lot of them don't have any new units to use I guess! 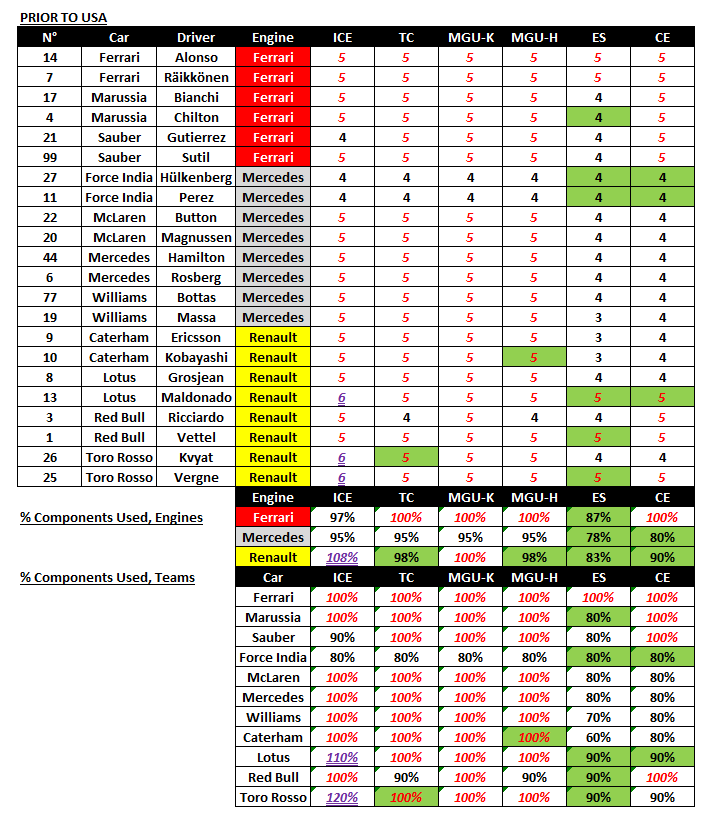 Contributor
Force India finally use some 5th units and a 6th everything for Vettel as we already knew: 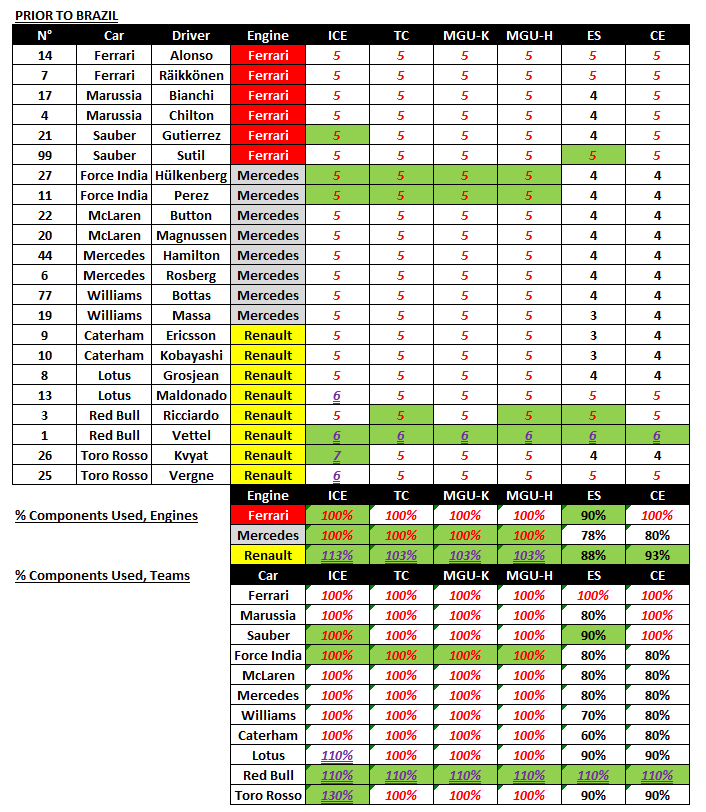 Contributor
Totals going in to the Abu Dhabi weekend, just a few new sets of batteries and control electronics. I'm not sure whether anyone will give us the final totals for the season (e.g. taking in to account all the new units Grosjean has had to fit since Friday), although I may be able to do some guess work based on penalties given. 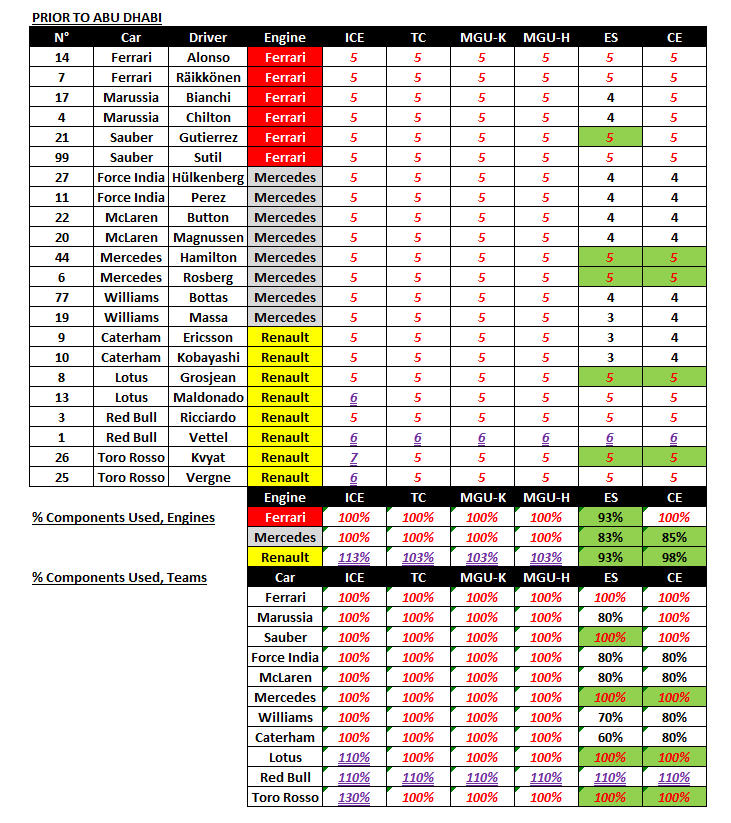