Supporter
I was looking for a thread like this in the F1 section but was unable to locate one. So I'll just start it.


Going over the first 2 races of 1984 I noticed this quirky side-note. In Brazil Jonathan Palmer did not qualify for the race, finishing 27th on the qualifying timesheets. Yet he got to race on Sunday as the ATS of Winkelhock was excluded due to a sporting reg. violation and subsequent eruption from Gunther Schmidt. In South Africa the non-qualifier, Thierry Boutsen, was called up for the race as well when Piercarlo Ghinzani had a big shunt during Sunday warmup and couldn't make the start.


Please feel free to post your own little interesting factoids and findings.

Contributor
In 2007 Markus Winkelhock led the German GP in his only start in F1. He is the son of Manfred and nephew of Joachim, are there any other families who have had three F1 drivers?

I was reminded of this one just yesterday with the disgusting news out of Australia regarding Gary.

And I guess we're stretching it a bit to call Gary an "F1 driver" as he only failed to PRE-qualify twice in the disastrous LIFE.

Valued Member
KekeTheKing - Having checked that news, "an F1 driver" is a long way down the list of things I'm calling him.
Last edited: 25 March 2016

The 1988 Portuguese GP was developping into an exciting triangular battle for the lead bewteen Prost's McLaren, Capelli's March and Berger's Ferrari, until the latter spun out of contention.
It had looked like a straightforward error by the austrian but as it turned his retirement was caused, quite literally, by cold feet, His onboard extinguisher had suddenly set itself off at turn three under braking, filled its cockpit and turned the pedals into an ice-skating rink.
Last edited: 25 March 2016

Didn't a jaguar mechanic a few years ago send the driver out with a spanner in the footwell of the car to make it an interesting challenge to press the brakes?

Let me guess, was this one of Eddie Irvinie's mechanics?...

Valued Member
Had to look up the spanner incident. It was Jonny Herbert in a Sauber at the Italian GP in 1998.

Olivier Panis retired his Toyota from the 2004 British GP when his fire extinguisher went off in the cockpit.

On families, the Scheckter brothers both raced in F1. Ian wasn't quite as talented as Jody (to say the least). Puts you in mind of two other brothers who's names started Sch.

Valued Member
On bizarre brother related things, when Teo Fabi drove for Brabham in 1983 he was also committed to a CART season. When the F1 and CART races clashed Corrado Fabi (Teo's younger brother) took over the seat. They only got the driver because Parmalat insisted on an Italian driver.

Mark Webber has weird things happen to him in f1. Retired from a Japanese gp because he'd burnt his backside on a overheating seat.
Also in 2007 Japanese gp at fuji he was sick inside helmet during his helmet

Alain Prost's last competitive kart outing ended with the suspension of his license following a punch-up that resulted in a broken nose to his main rival Francois Goldstein.
He was set to take the title when one of Francois's team-mates drove him off with a couple of laps to go. Smelling a conspiracy Alain saw red when Goldstein extended his hand during the slowing down lap. He deliberately crashed into him, leaped out of his vehicle and punched Goldstein on the throat (both drivers were wearing open-faced helmets).

Ironically enough Goldstein had, who did have a bit of reputation for getting involved in controversies within karting circles, ad won the previous year's championship in very similar circumstances against none other than Terry Fullerton, who would later go on to become Senna's great karting rival in the late seventies.
Last edited: 25 March 2016

Incubus said:
Alain Prost's last competitive kart outing ended with the suspension of his license following a punch-up that resulted in a broken nose to his main rival Francois Goldstein. He was set to take the title when one of Francois's team-mates drove him off with a couple of laps to go. Smelling a conspiracy Alain saw red when Goldstein extended his hand during the slowing down lap. He deliberately crashed into him, leaped out of his vehicle and punched Goldstein on the throat.
Click to expand

In the german GP of 1977 Hans Heyer didn't qualify in his ATS-Penske. Nevertheless he started the race.

In his single attempt at Formula One, he entered the 1977 German Grand Prix on July 31, 1977 with the second Penske car of the new German team ATS. With little experience in single seaters and a bad car, he did not qualify. This did not stop him from racing, however; as he was well known with the marshals at Hockenheim, they looked the other way when he put his car at the end of the starting grid and joined the race anyway, to the surprise of everyone. His Formula One career didn't last long, though, for after 10 laps the car's gearbox broke down, and he was disqualified from the race and never attempted another race in a single-seat car.
Click to expand

Supporter
Here's one I had never heard. Apparently it's in Peter Warr's book but I just read it in Grand Prix+

Warr claims that James Hunt's retirement from Monaco 1979 was self-induced! 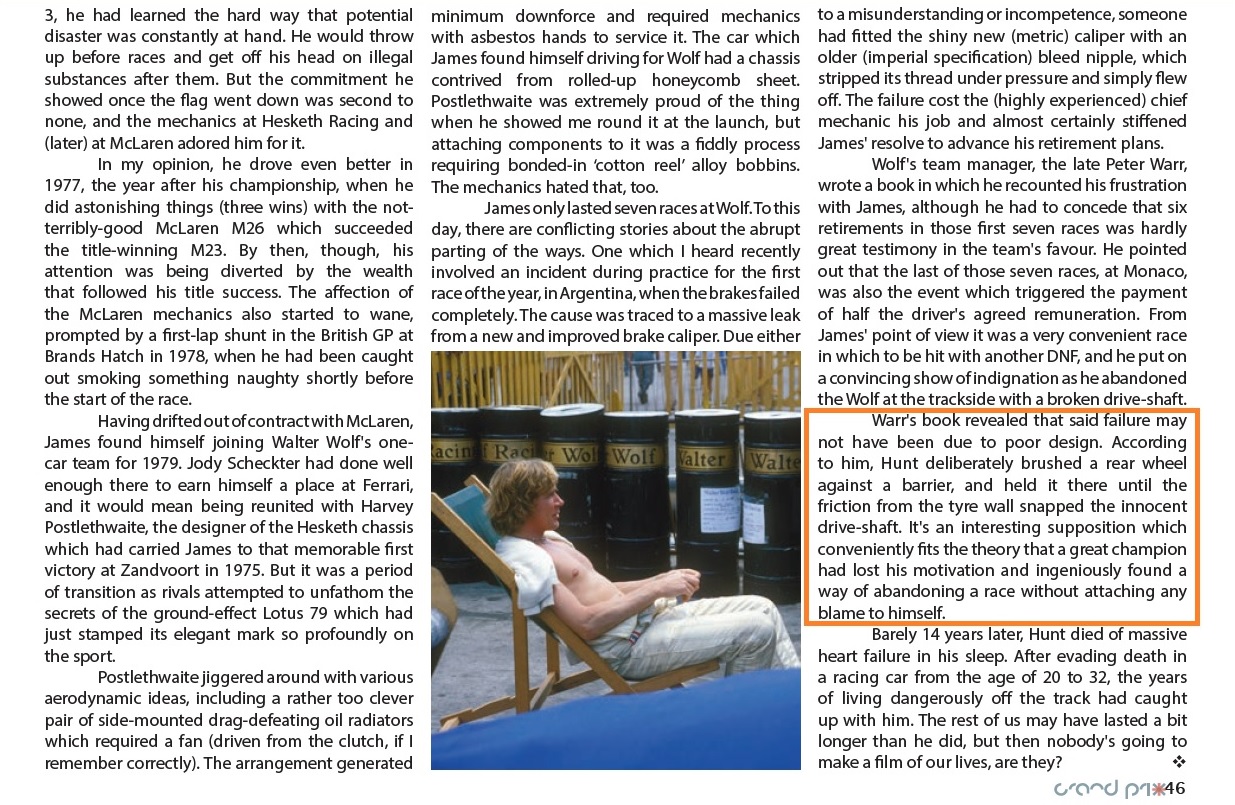 Staff Member
Premium Contributor
Yeah Warr claimed in his book that Hunt had confided in someone that he'd worked out if he rubbed the car on the wall and blipped the throttle it would break the drive shaft.

Valued Member
By all accounts he wasn't the same after Ronnie Peterson's accident. Goodness only knows what that was like.

Valued Member
In 1980 Ferrari had what I can only describe as a shit year as Jody Scheckter tried to defend his World Championship in the awful 312 T5. Part of the problem was with the Michelin tyres which, strangely for a French made product, worked very well on the Renault cars. At the Canadian GP towards the end of the season Ferrari could not get the rubber to heat up so resorted to manually cutting grooves in the tyres to try and get some part of the tyre to offer grip. It didn't work.

Also, in the 1980 season, Arrows tried running their A3 at Kyalami with no rear wing due to the really long straight the circuit had at the time. Riccardo Patrese did one lap and then came back in to have it put back on.

One final one for now, after Ronnie Peterson's death his wife Barbro had a long term relationship with John Watson until she took her own life in 1987.

Valued Member
Now here's a strange story, Pablo Escabar (yes, him of the Medellin Cartel fame) supported a Colombian driver called Riccardo Londono and even got him a run out in an F1 car in 1981.